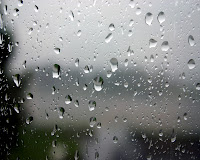 Two blogs in two days...? My cup of inspiration runneth over...? Not exactly. Just an reaction to the relentless rain that's been raining on our parade of summer here in Ireland. Need I utter the refrain? - Rain, rain and more rain, never rains but it pours!, and especially in this country in summer.

Met Eireann have just announced that it's the worst summer on record for about 20 years. I could have informed them of that a month ago when the whole country was up to its eyes in puddles and I had to endure the recurring personal tragedy of soaked flip-flops turning to soggy cardboard.

We're all gonna be suffering from SAD by the end of August, I know it. I already am. Help! Drowning in monsoon misery! Right now Travis' song 'Why Does it Always Rain on Me?' seems to be playing in my head on repeat, most suitably morose for these incessant downpours. It just ain't natural to look out at winter weather in summer. Drip drip drip: bring on the melancholy.

And funny that in films and books, rain is always some kind of dramatic prop. Be it revelation, some sign of redemption ('Shawshank', to be specific), or realisation. And even romantic. Look at 'Breakfast at Tiffany's.' And a few hundred more that I just can't name right off, but if you want proof, check out this well-assembled montage. And of course, the ultimate film featuring rain - 'Singing in the Rain.' Who the hell dances their way through puddles in reality I ask you? More like stomp. And music makes big of it too. Rain as romantic and regretful: 'Kiss the Rain' by Billie Myers and 'November Rain' by Guns 'n' Roses; rain as revelatory: 'January Rain' - David Gray; and rain as redemption-in-waiting: 'Prayers for Rain' by The Cure, are just a few that spring to mind right now.

But I did get another blog out of it I suppose. Been having a dry patch for so long, and now....need I say it, the rain ah, who would have thought it would be inspiration?

And now for the impetus behind this blog. Here's the only anti-dote (rainbow?) I can think of to this season of rain: two brilliant poems on the subject. Only Seamus Heaney, a poet I am most in awe of,  could make something magical out of it. Just listen to the sound in his poem 'The Rain Stick', which is so glorious and graceful, full of 'glitter-drizzle' and 'diminuendo'. I feel better already. And another great modern poet,  Don Paterson, a Scottish bard, who I recently had the good fortune to see read, (on a sunny day too) gives his rhythmic metaphorical take on it. Enjoy.

not singing, but trying not to whinge about it as much -

Up-end the stick and what happens next
is a music that you never would have known
to listen for. In a cactus stalk

downpour, sluice-rush, spillage and backwash
come flowing through. You stand there like a pipe
being played by water, you shake it again lightly

and diminuendo runs through all its scales
like a gutter stopping trickling. And now here comes
a sprinkle of drops out of the freshened leaves,

Then subtle little wets off grass and daisies;
the glitter-drizzle, almost-breaths of air.
up-end the stick again. What happens next

is undiminished for having happened once,
twice, ten, and thousand times before.
Who cares if all the music that transpires

is the fall of grit or dry seeds through a cactus?
You are like a rich man entering heaven
through the ear of a raindrop. Listen now again.


I love all films that start with rain:
rain, braiding a windowpane
or darkening a hung-out dress
or streaming down her upturned face;

to where the woman sits alone
beside a silent telephone
or the dress lies ruined on the grass
or the girl walks off the overpass,

and all things flow out from that source
along their fatal watercourse.
However bad or overlong
such a film can do no wrong,

so when his native twang shows through
or when the boom dips into view
or when her speech starts to betray
its adaptation from the play,

I think to when we opened cold
on a rain-dark gutter, running gold
with the neon of a drugstore sign,
and I’d read into its blazing line:

forget the ink, the milk, the blood—
all was washed clean with the flood
we rose up from the falling waters
the fallen rain’s own sons and daughters

'January Rain'(Instrumental) - by David Gray
Posted by Siobhán at 00:59