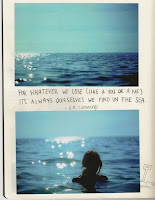 'I must go down to the seas again, for the call of the running tide is a wild call and a clear call that may not be denied;' - John Wasefield 'Sea Fever'

No sooner had I published my post about rain than we have two solid days of sunshine.  Typical! Talk about schizophrenic weather! (But now it's raining again in blustery skifts, in what seems to be some sort of summer storm...) So before 'summer' is over I think I'll write a little bit on the quintessential muse of the season: the sea.

I live beside the sea and indulge in the odd beach walk or two now and again.  The sea offers up a plethora of metaphors to the imagination. It's maybe the ultimate muse for a writer and that's why I'm always cautious writing about it, for fear I step on that dreaded danger all writers recoil from: cliché. 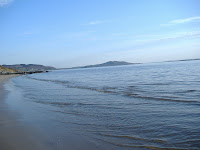 I especially like summer evening walks. When there's still light in the sky; when the sun is dipping on the horizon like a huge mirrorball; the warm soft feel of sand beneath my feet and the slight sting of the salted air:  'The soft lap of sea on land, a gentle kiss. Blue sky and water like a landing strip of silver light. Dotted with gulls swooping in sharp arcs. Curly debris sand from spontaneous stick etchings and the bric-a-brac of daytime revellers. Water like polished glass, glistening aluminium grey. Drumlin grass dunes decorated with daisies and like small microphones trying to catch the breeze.  But all quiet with the lullaby of evening. Stilled. Soothed. Volume of the day turned down, so significance can whisper in. And the sun hanging over the scene

Why does the sea hold such a fascination for us? Writers have explored it at  great lengths throughout the ages. One of my favourite sea-faring books has to be the American classic, 'Moby Dick' by Herman Melville.  In chapter one, the narrator Ishmael muses on this:  "Why did the old Persians hold the sea holy? Why did the Greeks give it a separate deity, and own brother of Jove? Surely all this is not without meaning. And still deeper the meaning of that story of Narcissus, who because he could not grasp the tormenting, mild image he saw in the fountain, plunged into it and was drowned. But that same image, we ourselves see in all rivers and oceans. It is the image of the ungraspable phantom of life; and this is the key to it all."

In the novel also, life at sea seems to be a metaphor for a way of life that is not sequestered by routine and settling down. It is the very opposite: random and wild and dangerous and forever drifting, for flighty free-spirits and lost souls like Ishmael, who goes off on the whale expedition in the first place to 'find his bearings', stating that the sea is the only place to do this: "Whenever I find myself growing grim about the mouth; whenever it is a damp, drizzly November in my soul.... then, I account it high time to get to sea as soon as I can." It's like the sea can fix him, or at least, stave off the boredom and stifling security that land offers. I myself would rather be swept out at sea than stuck on land (metaphorically speaking) i.e. drifting rather than being docked to something that I don't want. (And there's a summing up of my whole philosophy right there! Call me Ishmael!)

The sea is also used as a metaphor for fluidity and movement. As Shakespeare famously wrote: "There is a tide in the affairs of men, Which taken at the flood, leads on to fortune. Omitted, all the voyage of their life is bound in shallows and in miseries. On such a full sea are we now afloat. And we must take the current when it serves, or lose our ventures." Hmm...are these the thoughts that we're thinking of while watching the to-and-froing of waves? Or maybe it's more along the lines of Shakespeare's sonnet: "like as the waves make towards the pebbled shore/so do our minutes hasten to their end." Gloomy a tad. But maybe the sea does put us more in touch with our mortality. And brings into focus our solitude. How big and vast and majestic it is can certainly help put things into perspective now and again.

Let's not forget that water is also the element of the emotions. Water signs in astrology have the main trait of being emotional, Pisces the most notable for depth of feeling.  Also, to dream about water is to signify a state of emotional flux. Drowning means that you can't cope with some emotion. Dreaming of a tsunami means a total overwhelming. All my life I've been dreaming about tsunamis, before I even knew their technical name, before they swept into popular consciousness with a dire legacy.  Freud would probably see it at as an emotional fear of some kind...me, more as the malevolent power of the ocean, coupled with my slight fear of water. Whether this is due to the fact that I'm a Fire sign, or more to do with the memory of being made hop waves at the beach when I was a teeny-tottering child who hated bath-time, never mind sea-time, it's stuck with me ever since.

Just imagining the unfathomable depths of the ocean makes me shudder. Is it because the ocean is so mysterious that we're so drawn to it? That we know so  little about it? 20,000 leagues under the sea, there lies..... what exactly? Stories of sea-monsters kept sea exploration to a minimum before the days of Columbus. And then mermaids and sirens. Now rogue waves and tsunamis and ship-sinking squalls.  That it's so dangerous and powerful could explain why it's so compelling to us.

Or maybe it's more to do with this: 'The cure for anything is salt water: sweat, tears or the sea' - Isak Dinesin. Because we are composed of mostly water, maybe we need the sea to keep us in harmony, to calm our  inner seas of turmoil. Its syllables soothe our souls. Maybe it allows us to see horizons we don't see on land. Reminds us of who we are, how everything is in a state of constant movement, constant flux, nothing is static, nothing is permanent.

Hmm, from a simple beach-walk to all this ocean musing. Maybe the ocean is just a great big metaphysical metaphor for our minds, a physical manifestation of the unfathomable depths of our subconsciousness. Whatever it is, there's no doubting that it certainly is one of the greatest muses for writers and all kind of artists.

(Apologies for the blooper I made earlier of prematurely posting this blog while  only on the first paragraph - email recipients- I hope you ignored it, sorry!)

And some poems. The first by Pablo Neruda, which talks about the poet's relationship with the sea, and the sea as a metaphor for poetry. When I think of Pablo Neruda, I think of turquoise waters, he has written so many poems about the sea and with  such beautiful imagery and sound, it seems as if the sea itself is echoing in the lines. Infact his collection 'On the Blue Shore of Silence' is a collection of all his sea poems, a veritable love-letter to the sea.  The second, is by EE Cummings, once again. The last two lines say it all, but I also love 'as small as a world and as large as alone.' Simply complex, as always. Enjoy.

To whoever is not listening to the sea this Friday morning, to whoever is cooped up in house or office, factory or woman or street or mine or harsh prison cell; to him I come, and, without speaking or looking, I arrive and open the door of his prison, and a vibration starts up, vague and insistent, a great fragment of thunder sets in motion the rumble of the planet and the foam, the raucous rivers of the ocean flood, the star vibrates swiftly in its corona, and the sea is beating, dying and continuing. So, drawn on by my destiny, I ceaselessly must listen to and keep the sea's lamenting in my awareness, I must feel the crash of the hard water and gather it up in a perpetual cup so that, wherever those in prison may be, wherever they suffer the autumn's castigation, I may be there with an errant wave, I may move, passing through windows, and hearing me, eyes will glance upward saying 'How can I reach the sea?' And I shall broadcast, saying nothing, the starry echoes of the wave, a breaking up of foam and quicksand, a rustling of salt withdrawing, the grey cry of the sea-birds on the coast. So, through me, freedom and the sea will make their answer to the shuttered heart.