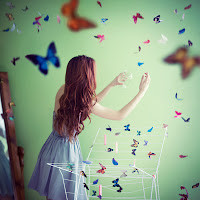 It's one thing saying you're a writer, but a poet? Well, that's quite another. Or should it be a poetess? How in the heck to define it? Conjuror, magician, wordsmith, visionary, shaman?  Or just language-lover? As W.H. Auden defined it: "a poet is, before anything else, a person who is passionately in love with language." And I am. Totally. Irrevocably. Swoon.

I'll leave you with EE Cummings on the experience I've been trying to describe. Notice how the whole structure of his poem delightfully and accurately conjures up the itty-bitty delicate feel of putting a poem together. Enjoy.

and perfectly)nowhere
vivid anonymous
mythical guests of Is

illimitably Grow
Posted by Siobhán at 22:11