Writing & The High-Life: An Ode to Sex and the City & Carrie

Ah, after an welcome indulgence in the world of fashion, I'm feeling quite creative again. Why? Because fashion is most certainly one of the creative arts, is it not?

I happen to be of the opinion that fashion is the best creative outlet for visibly expressing one's individuality. How we dress speaks volumes about who we are. It is perhaps the first defining aspect of self we manifest to the world. It's how we present ourselves to the world, a form of visible communication about who we are, our mood and personality indicators.

And well, all this leads me to Sex and the City. (This and the fact that it's autumn - and I always get to thinking of New York in autumn...)  Yes, it's finished its television run, but I've still been re-watching - as I'm sure countless others have! I remember in my college days when the series was just starting to be en-vogue, looking forward to a Thursday night to sit down and watch it, with a bowl of popcorn and a notebook for post-show inspiration. For not only was it empowering to women on so many levels - it was also inspiring to writers too, women writers especially, freelancers most especially! 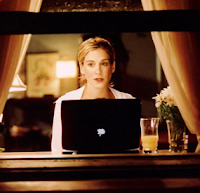 Sex and the City was not just a show, it was a culture phenomenon. You see, at the heart of all that fashion and dating subject-matter, was a powerful positive feminist and self-empowerment message for women. And at the heart of all the surface frivolity of fashion, there was the deeper underlying facet of life revealed. The show revolved around its main character Carrie, a New York columnist and writer. And holding every show's story, every episode together, was a new column by Carrie.

Carrie was my TV idol writer then; I mean who else was there? Meddling and annoying Jessica Fletcher on Murder She Wrote? Those shadowy male aide-de-camp writers on crime shows? There weren't that many writers on TV then, and Carrie was both a successful woman writer and living the high life in New York. What wasn't there to admire?

(I remember when I used to write a weekly column for my local newspaper post-Sex and the City. There were a few people who flung some Carrie comparisons at me - and it was truly a compliment (if not an exaggeration! - what I was writing about was not sex and dating and fashion and cosmopolitans - it was more focused on the light-hearted side of rural living...) Why did they use that reference? Because it was the only popular culture comparison/female writer role-model relevant I suppose - well, apart from Lois Lane maybe... but she was a bit dated by then.) 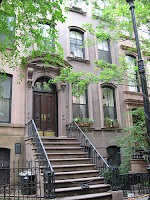 It was this primary aspect that attracted me to the show (the feisty feminist attitude second). I LOVED the idea of being a writer in New York! How glamorous and inspiring! All those cafés within a short stroll to nestle in with a portable Mac and the grandest variety of coffees available. (What other public space in the world is so inviting to writers other than an American Starbucks I ask??) Not to mention a desk (in a trendy, cosy apartment) at an open window looking out onto a tree-lined New York street, with all those horns and sirens blaring in the distance - the pace of hurried busy happening life tapping out its infectious rhythm as your soundtrack. Or even, if the notion took you- perched on a fire-escape, journal in hand, writing frantically, with the city below you. In New York, even a short stroll offers multiple muses: regret bumping into old lovers, rainy days in museums, donuts in the park, walking the windswept leafy streets in autumn, leaves twirling to the ground in front of you, the changing city a veritable ubiquitous metaphor for life's incarnations - (Carrie @the end of episode #'I Heart NY').

And then there were all those posh book releases and publishing parties to attend and sip champagne at, bumping into writers (and possible dates) at every polished marble bar counter. To have your picture grace the side of a bus (ok, well, maybe not...) and be the talk of the town for controversial read-by-everyone columns. But mostly, I think it was the idea of writing in a place that had a thriving literary scene, where it was OK to say you were a writer (it even could get you VIP passes!), where it was welcomed and embraced that really got me.

Oh and of course - the most incredible bit - being able not only to live on, but to splurge on the income from a once-weekly column like Carrie. My, that would be the life! (Sadly, this has to be the most unrealistic aspect of SATC...) To be a part-time writer and decked out in designer gear - it just ain't plausible! But oh it is appealing.

But it wasn't only that aspect of the writerly life that appealed to me - it was Carrie's columns. Whatever other criticism the show got, the framing device of Carrie's writing couldn't be faulted. Every column took its neat shape from the episode's storyline and vice-versa; starting off with a flash of inspiration and Carrie typing a specific statement/question relating to life, love, relationships, fashion, friends, preceded by the infamous words 'I couldn't help but wonder...'

While her ruminations weren't literary classics, they were memorable and true, even bordering on the profound at times and put in an easy bitesize enlightening way, that ensured their impact with all viewers, not just the writing ones! While the episode started out with a query, the subsequent events in Carrie's and her friends' lives led to the end outcome; the show finishing with a voiceover from Carrie, closing both her column with a newly-acquired (and sometimes hard-won) enlightened view and the episode's storyline.

Some of these conclusions were admirable witty gems, affecting and inspirational, others would make good quips for bumper-stickers!  Especially in the last ever episode of the series where Carrie delivered her final verdict on relationships - an affirming and self-empowering statement that summed up the whole show's message (see last quote posted below), complimented by the swelling chords of The Source's song 'You Got the Love' in the background.

The ending was my favourite part of every show. It showed the illumination writing is capable of offering. And what was best - how your own life could offer up so much inspiration for writing. You didn't have to live an exciting one, just an ordinary one, but armed with the curiosity to delve into it and see all the questions and answers it contained. Basically, that writing was a way of pondering the world and understanding it. That it was redemptive. And all of Carrie's column conclusions were ultimately empowering and enlightening and added an extra dimension to the entertainment character of the show.

So I'll leave you with some of my favourite column quotes below, to muse and mull over (and also, so just for a moment, whilst typing them, I can feel like Carrie Bradshaw...!) 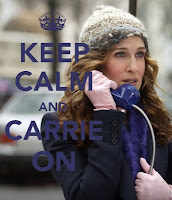 ~ 'When real people fall down in life, they get right back up and keep walking.' (after a fall on the catwalk as a 'real people' model at a charity fashion show)

~ 'That night I started to think about belief. Maybe it's not even advisable to be an optimist after the age of 30. Maybe pessimism is something we have to start applying daily...like moisturizer. Otherwise, how do you bounce back when reality batters your belief system, and love does not, as promised, conquer all? Is hope a drug we need to go off of, or is it keeping us alive? What's the harm in believing?'

~ 'The past is like an anchor holding us back. Maybe, you have to let go of who you were to become who you will be.'

~ 'Why do we let the one thing we don't have (a partner) affect how we feel about all the things we do have? Why does one minus a plus one feel like it adds up to zero?'

~ 'After all, computers crash, people die, relationships fall apart. The best we can do is breathe and reboot.' 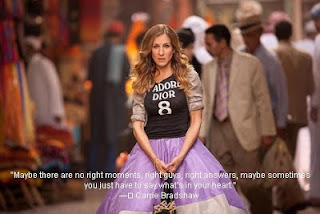 ~ 'Maybe the best any of us can do is not quit, play the hand we've been dealt and accessorize what we've got.'


~ 'Life gives you lots of chances to screw up which means you have just as many chances to get it right.'

~ 'Maybe some women aren't meant to be tamed. Maybe they just need to run free 'til they find someone just as wild to run with them.'

~ (On Fate) 'That crazy concept that we’re not really responsible for the course our lives take. That it’s all predestined, written in the stars. Maybe that explains why, if you live in a city, where you can’t even see the stars, your love life tends to feel a little more random. And even if our every man, every kiss, every heartache, is pre-ordered from some cosmic catalogue, can we still take a wrong step and wander off our own personal milky way? I couldn’t help but wonder, can you make a mistake and miss your fate?'

~ 'Being single used to mean that nobody wanted you. Now it means you’re pretty sexy and you’re taking your time deciding how you want your life to be and who you want to spend it with.'

~ 'I'm someone who is looking for love. Real love. Ridiculous, inconvenient, consuming can't-live-without-each-other-love.'

~ 'Why is it that we only seem to believe the negative things people say about us, no matter how much evidence there is to the contrary? ...Odd, but when it comes to life and love, why do we believe our worst reviews? The truth is, at any given moment someone somewhere could be making a face about you. But it's the reviews you give yourself that matter.'
~ 'Later that day I got to thinking about relationships. There are those that open you up to something new and exotic, those that are old and familiar, those that bring up lots of questions, those that bring you somewhere unexpected, those that bring you far from where you started, and those that bring you back. The most exciting, challenging and significant relationship of all is the one you have with yourself. And if you find someone to love the you you love, well, that's just fabulous.' 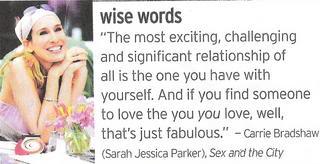