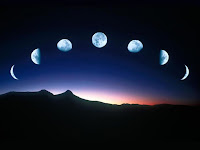 More moon lore... I dont know about you but I find the names of the full moons fascinating. And what's more, have you noticed how many songs there are about the moon or influenced by the moon? It's quite remarkable really! 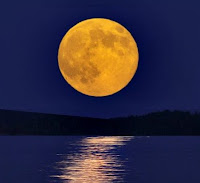 Just this weekend, we had the Harvest Moon - the biggest and brightest and best-known of all the full moons. The Harvest Moon is the full moon that occurs closest to the Autumnal Equinox, which falls on September 21st. It has a distinct orange golden glow and appears low-hanging on the horizon and as such, really big - especially when we look at it across the horizon, where the more atmosphere its light travels through, the bigger and more coloured it appears (the moon illusion). Ask anyone about a full moon that really caught their eye and chances are it was the Harvest Moon. Big and brazen and bold!

The Harvest Moon gets its name from the corn harvesting season in which it occurs. Its bright long-lasting light allowed farmers to stay up all night to harvest their crops. The full moon names originate from the Native Americans, who named them accordingly to keep track of the seasons. The Farmers Almanac, published in North America since the early 19th century, is another source for the names given to full moons.

Anyway, here are the most common of the full moon names:


-January: Wolf Moon - This moon gets its name from the howling of wolf packs outside Indian villages around this time of year.
-February: Snow Moon - The heaviest snows at this time of year led to this name. Usually a bright white moon too.
-March: Lenten Moon - so called since Lent always fell in this month. Native Americans called it the Worm Moon, since it was the time when earthworms began to appear again after the ground thawed.
-April: Pink Moon - Nothing to do with its colour, this moon was named after the flowers that appear first in April, most notably pink moss or wild ground phlox. I love all the connotations of the pink moon - Spring flowering forth and a warm blush enveloping the land.
-May: Flower Moon - An acknowledgment of the flower season beginning. 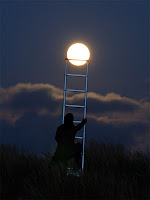 -June: Honey Moon - Ah, this one you may know! Yes, the wedding 'honeymoon' got its name from this moon, as June was (and still is) the most popular summer month for weddings. The name itself refers to the bees gathering honey at this stage of the year. It was also known as the Strawberry Moon to the Native Americans.
-July: Buck Moon - For Native Americans, this was the month when the new antlers of buck deer appear.
-August: Sturgeon Moon - The Indian fishing tribes are given credit for naming this moon since sturgeon - a type of fish - were regularly caught during this month. Other tribes named it Red Moon, as the full moon sometimes appeared with a reddish tinge at this time.

-September: Harvest Moon - the corn harvesting season gave this moon its well-known name. It is the name given to the full moon which occurs nearest the equinox, which can mean that it sometimes falls in October. Personally, I find the name quite relevant to this time of year - a time of reaping what one has sowed and moving on, new beginnings and renewal. (Read more here)
-October: Hunter's Moon - Native Americans named this moon after the hunting season which began at this time. It was generally accorded with special honour, because of the threat of winter looming close.
-November: Frosty Moon -  Pretty self-explanatory - relating to the weather at the time! The frosty moon is so aptly called - you''ll notice that it appears whiter than the rest of the moons like pure ice, and shining just as bright. It usually appears very high in the sky.
-December: Cold Moon - Again, relating closely to the weather! Also known as The Long Nights Moon referring to the darkest and shortest days of winter.

So which is your favourite moon? The Harvest Moon perhaps is the most famous - everyone knows of it.  An unique  book I came across recently about the moon, well, really - a journey in search of moonlight (it was in the travel lit shelf) - 'Nocturne' by James Attlee, acknowledges the harvest moon as his inspiring starting point for the book. Here's an excerpt from the preamble where he recounts a memorable experience of seeing a harvest moon: 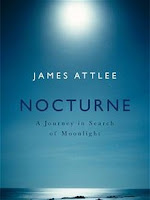 "I was walking with a friend one hot August... As we rounded a corner we were both halted mid-stride by what lay before us. Looking out across the ocean we saw what appeared to be the lights of a great ship approaching, glowing orange across the water. We had been idly tracking the movement of vessels all day, as visitors to the coast will do, pleasure craft and small fishing boats mostly; we had seen nothing of this size. As we watched, we realized our eyes had been playing tricks on us. What we were seeing was the rim of the harvest moon emerging from the sea, a monstrous, swollen apparition, its shape distorted by the atmospheric conditions; glowing and pulsing like an ember, craters and canyons were clearly visible on its surface like purple veins. We stood for a few minutes before hurrying back along the path to the house where we were staying and calling our friends outside to toast the moon as it wobbled up into the sky. Later that night I was woken by the mournful bellow of a foghorn. Going to the window I saw that the moon had changed colour from tangerine to silver and was casting a blade of light over the perfectly still sea, across which a solid wall of fog was advancing towards the shore. On this night at least, in this distant corner of our crowded, congested archipelago, the moon still reigned supreme."

It does indeed.  And just look at its influence on music! How many moon songs can you name? Almost too many to mention! (More than the sun I dare say!) And it seems they all come with the corresponding moon themes: melancholy, madness, romance. Posted below are some of the most well-known ones as well as my own personal favourites. 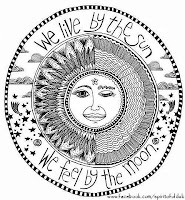 So many of us go about our day-to-day lives blind to the beauty of the world that surrounds us. But the moon, the moon, is a constant reminder, hanging in the sky like a miraculous glowing footnote, impossible to ignore. A reminder of some wonder that still remains intact in this often jaded world. The moon never fails to enchant us and never more so than when in its full shining glory. And I'm always surprised by how many people it affects, how many people actually stop to marvel at it, how many people it shines its light on. It's quite heartening.

So how about you? What's your favourite moon or moon song?? Do share in the moon musing!!

For the moon that's in it -  Harvest Moon by Neil Young:

Moody & Melancholy:
The Whole of the Moon - The Waterboys
Man on the Moon - REM
Full Moon - The Black Ghosts
Moon - Sia
My Moon My Man - Feist
Moon and Moon - Bat for Lashes 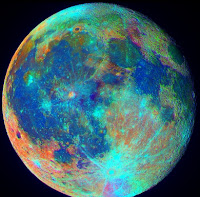