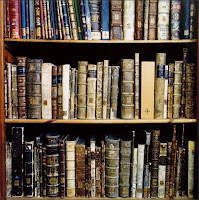 Literature. It's such a heavy term in a way. An intimidating term. A posh term. It sounds just a bit too fanciful for everyday speech. When people ask you what type of books do you read, would your answer really be 'literature'? Maybe if you were an Oxford don or a professor...

But after coming across this quote last week, I'd consider it. It's so hard to explain sometimes to people in a brief moment what good books really are. What they consist of. The effect they have. But here, Ezra Pound sums it up quite neatly: 'language charged with meaning to the utmost possible degree.'  That simple. That precise.

So yes, I like to read literature, great literature (which can come in a grand variety of styles - it's not just the classics in Penguin!). Because I like to read books that mean something. That have something to say on life. That are well written. I don't read solely for entertainment value, for a good 'yarn,' for sheer escapism, for a suspenseful thrill.

I read to learn more about life, to see all the aspects of it explored in print. And for books to do that, their language must be something more than functional: it must be infused with meaning, with depth, with implications. It is not difficult language, it is loaded. Therefore it may take more time to read than your bestselling blockbuster thriller or chick-lit. But the reward is all the greater.

You'll come away from the book with life (sometimes appearing meaningless) charged  with more meaning than ever.

If you're going to read anything, you may as well read the best - and that's literature. How will you know? If the story stays with you, yes. If it says something grand about life. If its effect is long-lasting and all-consuming.

But mostly, if the book's language offers wisdom and insight and in the space of a few sentences, makes you swoon at the beauty and simplicity and truth of its words, at the complexity it reveals in such an easy manner, one that settles in the mind and heart alike. And if the charge of those words, the meaning, infuses your whole being with a rich valuable knowledge and enlightenment about who we are and why we are and makes you look once again at this strange world of ours with the appropriate curiousity, awe, admiration, enthusiasm and gratitude.