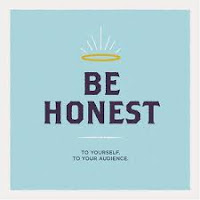 Honesty is the best policy so they say. Especially when it comes to writing. All writers urge honesty in writing. Don't be afraid to say what you really want to say. Call things as you see them. Hemingway was of the opinion that the highest pursuit in writing was to write 'one true sentence' and that 'all good books have one thing in common - they are truer than if they really happened.'

And from Hemingway to Stephen King. I'm currently reading his memoir On Writing which explores his viewpoint of the craft. I'm not a 'fan' of Stephen King - well, I don't really read that genre so I can't really say. I remember glancing through a few of his novels in a library once and feeling that they were quite well-written, but I never went any further than that I'm afraid (yes - too scared most likely!)

But I have to say I LOVE this book! I love the honesty of it. The straight-up talk. The frankness. (He even attacks the cult of the alcoholic genius writer that Hemingway helped create). I love reading what other writers have to say about writing, but I'm especially enjoying King's take on it, as it's just so.... real. He tells it as it is. And urges the reader to do the same. In the foreword he writes: 'This is a short book because most books about writing are filled with bullshit. Fiction writers, present company included, don’t understand very much about what they do- no why it works when it’s good, not why it doesn’t when it’s bad. I figured the shorter the book, the less bullshit.' Too right! 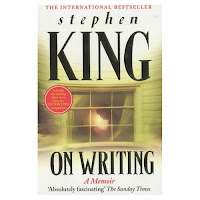 I especially like the part where he talks about reading -  that aspiring writers should read all the time. Even at meal times. To which he adds: 'Reading at meals is considered rude in polite society, but if you expect to succeed as a writer, rudeness should be the second-to-least of your concerns. The least of all should be polite society and what it expects. If you intend to write as truthfully as you can, your days as a member of polite society are numbered anyway.' Ha!  If you're not going to write truthfully incase you 'offend' people, forget about it - or as King says ' fuggghedaboutit.'

The countless times I've gotten into people's 'bad books' for what I've written! But that's the thing about writing - you come to the blank page and you either dive in totally or you don't. And to dive in totally  - you must write truly what you think and feel. No hiding. Or else the blank page will shine a spotlight on you and expose you for the skeletal writer you are.

Honesty goes hand in hand with writing. Some people write what they can't say. Love letters, for example. Greeting cards. Notes to self. Diaries. Writing unleashes some kind of primeval honesty. It's impossible to do it and not be honest.

I could never quite understand fellow classmates at school writing essays and asking 'but is it ok to say that?' Their writing was somehow separate from themselves and not a natural extension of their mind and self. Essays (or personal writing as it was called) was the one part of school where I got to be myself. And still I don't understand people when writing things hesitating and wondering how to word and reword sentences, sentiments. Just go with the flow is my advice. Literally. Say what you feel. It's not that  hard, is it?

Free-writing shows just how powerful writing can be.  It's a way of excavating the layers to what we're really thinking (and feeling). It peels away the masks of personas we may be wearing. Psychology understands this. Writing is an essential part of therapy these days. I'm sure we've all heard the exercise about writing a letter to someone you are angry with, in it listing all your grievances and feelings and then burning it to let the anger go. Writing is powerful stuff. It opens up the self. But only if you write true.

So you gotta be fearless in a respect. You're not just dealing with a pen, but a sword - a noble instrument, not to be wielded weakly or nervously or hesitantly.  Have you ever seen a timid swordsman??

And also, I just have to include here King's take on writing seminars and groups. Writers also require honesty in critiques, but unfortunatley this doesn't happen in writing groups. In the book  King notes his doubt over writing seminars and the likes and attacks the criticism on offer there:

'And what about those critiques, by the way? How valuable are they? Not very, in my experience, sorry. A lot of them are maddeningly vague. 'I love the feeling of Peter's story', someone may say. 'It had...something a sense of I don't know...there's a loving kind of you know...I can't exactly describe it.' Other writing-seminar gemmies include: 'I felt like the tone thing was just kind of you know; the character of Polly seemed pretty much stereotypical; I loved the imagery because I could see what he was talking about more or less perfectly'. And instead of pelting these idiots with their own freshly toasted marshmallows, everyone else sitting around the fire is often nodding and smiling and looking solemnly thoughtful. In too many cases the teachers and writers in residence are nodding, smiling, and looking solemnly thoughful right along with them. It seems to occur to  few of the attendees that if you have a feeling you just can't describe, you might just be, I don't know, kind of like, my sense of it is, maybe in the wrong fucking class.'

Well, never a truer word said Mr King! I've had more than my fair share of experiences like this where writing group critiques consist of vagueness, or the maddening smiling and nodding he so duly notes here. Not very helpful at all!

And here we touch on the tone of the whole book - the unguarded truth about the vocation which may explain its widespread critical acclaim and appeal. I'll end here with one of the famous quotes from the book, in which King addresses what way to approach writing, which in essence, is truthfully:

'You can approach the act of writing with nervousness, excitement, hopefulness, or even despair - the sense that you can never completely put on the page what's in your mind and heart. You can come to the act with your fists clenched and your eyes narrowed, ready to kick ass and take down names. You can come to it because you want  a girl to marry you or because you want to change the world. Come to it any way but lightly. Let me say it again: you must not come lightly to the blank page.'

For the aspiring writer - who isn't afraid of honesty - I'd highly recommend this book!