It's April (yes, april; my darling) 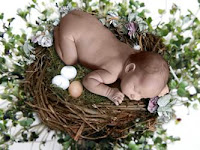 April hath put a spirit of youth in everything. ~ William Shakespeare

Whatever TS Eliot said, April is not the cruellest month - au contraire! Everyone loves April. It swishes in, all yellowed in sunshine and ribbons of Easter gifts.

Did you know that April's birth stone is the diamond, the worthiest of all the jewels? Or that it has a full moon called a pink moon? (I hear Nick Drake chords... ) And legend has it that its name could have come from the Roman goddess of love, Aphrodite. Or also the Latin word 'aperire', which means 'to open,' a reference to all the budding and blooming of the time.

And because it's my birth month, I especially favour it. (And lots of other birthdays too - I know around 20 friends and family whose birthday occurs in April, making it a real 'birthday' month in every sense of the word! - May explain the newborn picture I have...)

But it seems I'm not that biased; hell, even old Willy himself praised it. (maybe it was because he was an April baby too; the 23rd). EE Cummings was a big fan too - 'the sky a silver/dissonance by the correct/fingers of April.' In the poem posted below, he really captures the playful, flighty, free, feel-good spirit of the month, 'and breathing is wishing and wishing is having...and wishing is having and having is giving...and having is giving and giving is living...'

Shakespeare is right too. It does put a spirit of youth in everything. A spring in your step. The earth coming back to life and beaming in blooms. A real new beginning (even if it's not your birthday, it is the astrological New Year...)

And the  universe with its green light of Go beckoning everywhere. How can you resist its charm?

when faces called flowers float out of the ground - ee cummings

when faces called flowers float out of the ground
and breathing is wishing and wishing is having-
but keeping is downward and doubting and never
-it's april(yes,april;my darling)it's spring!
yes the pretty birds frolic as spry as can fly
yes the little fish gambol as glad as can be
(yes the mountains are dancing together)

when every leaf opens without any sound
and wishing is having and having is giving-
but keeping is doting and nothing and nonsense
-alive;we're alive,dear:it's(kiss me now)spring!
now the pretty birds hover so she and so he
now the little fish quiver so you and so i
now the mountains are dancing, the mountains)

when more than was lost has been found has been found
and having is giving and giving is living-
but keeping is darkness and winter and cringing
-it's spring(all our night becomes day)o,it's spring!
all the pretty birds dive to the heart of the sky
all the little fish climb through the mind of the sea
all the mountains are dancing;are dancing)