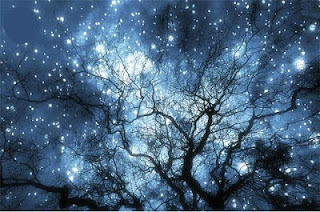 Today is the Winter Solstice, the shortest day of the year, the day when the sun stands still before reversing direction and coming back to us (in the Northern hemisphere). The returning of the light.

At its core, the Christmas season celebrates this natural phenomenon and all that it represents, namely, the light overcoming darkness.  The Solstice has been acknowledged for millennia, back when our ancient ancestors lit fires to keep the darkest part of the year at bay. Now every winter celebration, be it Christmas, Hanukkah or Diwali, uses light or lights as its symbolism.

Because it's pretty powerful symbolism. And as such, a very special time of year.

For me, it feels different in the days around the Solstice. Ever notice how the days seem almost coated in silver at this time of the year? Like all along, we've had dull grey miserable days, but now suddenly, between the frost and the cold (or maybe the expectation and general all round bonhomie) they've taken on a more luminous glow - a silver lining so to speak (not to mention a golden glow radiating off people.)

And it is in our own light, and our own acknowledgement of the light I suppose, that the real magic of the season ignites its spark.

Below, are some poems I thought represent the Solstice, that is, the welcoming back of the light, in all its forms.  (Now I know I have a whole other blog for this - A Poem a Day -
but I just couldn't resist posting some poems here in honour of the season).

Enjoy the holiday season! Lots of light to you! 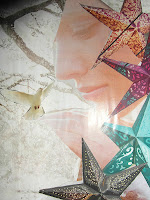 In winter's house there's a room
that's pale and still as mist in a field
while outside in the street every gate's shut firm,
every face as cold as steel.

In winter's house there's a bed
that is spread with frost and feathers, that gleams
in the half-light like rain in a disused yard
or a pearl in a choked-up stream.

In winter's house there's a child
asleep in a dream of light that grows out
of the dark, a flame you can hold in your hand
like a flower or a torch on the street.

In winter's house there's a tale
that's told of a great chandelier in a garden,
of fire that catches and travels for miles,
of all gates and windows wide open.

In winter's house there's a flame
being dreamt by a child in the night,
in the small quiet house at the turn in the lane
where the darkness gives way to light. 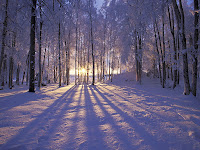 
Tell yourself
as it gets cold and gray falls from the air
that you will go on
walking, hearing
the same tune no matter where
you find yourself—
inside the dome of dark
or under the cracking white
of the moon's gaze in a valley of snow.
Tonight as it gets cold
tell yourself
what you know which is nothing

but the tune your bones play
as you keep going. And you will be able
for once to lie down under the small fire
of winter stars.
And if it happens that you cannot
go on or turn back
and you find yourself
where you will be at the end,
tell yourself
in that final flowing of cold through your limbs
that you love what you are.

Chunky and noisy,
but with stars in their black feathers,
they spring from the telephone wire
and instantly

they are acrobats
in the freezing wind.
And now, in the theater of air,
they swing over buildings,

dipping and rising;
they float like one stippled star
that opens,
becomes for a moment fragmented,

then closes again;
and you watch
and you try
but you simply can't imagine

how they do it
with no articulated instruction, no pause,
only the silent confirmation
that they are this notable thing,

this wheel of many parts, that can rise and spin
over and over again,
full of gorgeous life.
Ah, world, what lessons you prepare for us,

even in the leafless winter,
even in the ashy city.
I am thinking now
of grief, and of getting past it;

I feel my boots
trying to leave the ground,
I feel my heart
pumping hard, I want

to think again of dangerous and noble things.
I want to be light and frolicsome.
I want to be improbable beautiful and afraid of nothing,
as though I had wings.