I'm quite intrigued and affected by the idea of the tortured artist. We've heard it so many times it's almost become a cliché by now, an iconic stereotype, a myth. But what exactly constitutes a tortured artist? And why are they so tortured? Is it a hyped myth or a  cut-to-the-bone reality?

The tortured artist is a stock character and real-life stereotype who is in constant torment due to frustrations with art and other people. Tortured artists feel alienated and misunderstood due to the perceived ignorance or neglect of others who do not understand them and the things they feel are important.

Adding to that, they're usually associated with a string of accompanying vices: drink, drugs, (opium back in the day) gambling, sex and the like. They're also prone to emotional highs, heartbreak, depression, solitude and in some cases, self-harm and suicide.

And there's the lesser torture too: torture in terms of sweating blood and tears when the creative process isn't going well. The double-edged sword of pain and pleasure. When it's going good, it's really good - but when it isn't....  Personally, when I'm not writing, I'm a complete crank. The world loses its colour. I can't sleep. Or if I do I wake up filled with dread. Everything else fades to lacklustre. This is torture of a kind. But one that can be remedied.

The 'tortured artist' is a more gritty term - one that refers to the real heart-wrenching struggle that artists go through with the world and its shackles. The trying to come to terms with existence, expression, the search for meaning, emotional pain, isolation, inner demons, a scarred psyche, the desire to be understood, to understand, to fit in, to manifest the dream world into the real one, or vice versa. Essentially, what it means to be human. Artists are the people who stand up and engage with this proposition head-on (heart-on), and tortured artists, are the ones who get badly wounded in the process.

Did you know that if you  google the term 'tortured artist' you even get a top ten list! Top Ten Tortured Artists includes the likes of Ernest Hemingway, Orwell, Sylvia Plath, Van Gogh and even Kurt Cobain. But why stop there? The list is endless. Emily Dickinson, who at the rejection from her lover, resolved to settle for the only thing better - 'the whole world in its Divine aspect' - poetry - and thus embarked on a tortured reclusive life.

The ones that have made it onto the top ten lists are merely the tip of the iceberg.  For aren't all artists tortured in some way? All to different extents, but all affected in some way. They don't have to go  to the extremes of self-mutilation, suicide, or alcoholism and drugs to be classified as 'tortured.' Some live with it, some overcome it and some successfully use it to fuel their work. What can't be denied is that it is a very real feature of being a creative.

(Vincent Van Gogh pict. The famous tortured artist who suffered from depression and eventually killed himself.)

Take the iconic image of the writer in the garret scribbling feverishly into the wee small hours of the morning to reclaim his sanity from the devil of writing. Indeed George Orwell knew all about it: 'Writing a book is a horrible, exhausting struggle, like a long bout of some painful illness.  One would never undertake such a thing if one were not driven on by some demon whom one can neither resist nor understand.' A demon, whom one can neither resist or understand. This impulse to write, make art or music is a compulsion, an obsession and obsessions always result in some kind of torture, do they not?

Franz Kafka remarked that 'Writing is utter solitude, the descent into the cold abyss of oneself.'  Well, if this is so, it's only to be expected that the writer, the human being,  will emerge changed from the experience. Prolific novelist Margaret Atwood has noted many times that writing is a descent of sorts into the dark. You have to be prepared for the  psychological trauma of it that will at some level, impact on you. 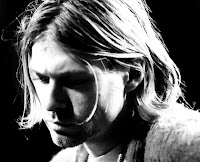 I think the most important part of the tortured artist definition is the misunderstood and alienated part. This afflicted persona stems greatly from lack of understanding of the things that are important to them. All artists are sensitive to the point of fragile; keen observers of the world around them, some albeit critical, satirical, sarcastic - are at their core sensitive beyond anything else. All artists possess a heightened sensitivity that absorbs all experience and transmutes it into art. Artists feel things more than others. They have to. It's in their job requirements. If they didn't, they wouldn't be able to respond to the world with such acute awareness. To feel tortured is just a by-product of this, an occupational hazard. It comes with the territory. And some deal with it in different ways to others. (Kurt Cobain pict, acclaimed lead singer/songwriter of 90s grunge rock group Nirvana, who is now infamous for having committed suicide)

The vices mentioned above may be stimulants, props or inspiration to some, but to most, they're crutches. It's a lot to deal with - going about this world with an open mind, an open heart, an open soul, exposed to good and bad. Just as it's been said you must metaphorically 'open a vein and drip blood onto the page' to write, so too must you do the same with your soul to create any kind of art. You're vulnerable sure. But you really wouldn't have it any other way. Any other way, you'd be closed off, and unable to create. 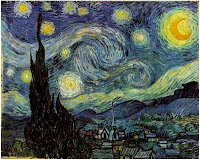 Gertrude Stein once said the the purpose of the artist was to find 'an anti-dote to the emptiness of existence.' And this I think, is wherein all the torture emanates from. This is the grand purpose of art, its high quest, its motivating reason. And artists either consciously or mostly subconsciously take it on, carry the weight and pride and responsibility of it.  That struggle for meaning, for beauty, for something else more vital, more powerful than reality. Transcendence and belonging. Truth and dream. To strike at the heart of our existence and make it their life's priority to pursue it of course can lead to an overwhelming, a despair, an internal turmoil that characterises all artists.
('Starry Starry Night' - Van Gogh. Van Gogh's pictures are noted for how visible his pain appears in the terse brush strokes.)

Unfortunately, there are artists who are wounded so much by the emptiness and the big black void that they give in to it. It's a difficult challenge, to say the least. Nigh-impossible, some would say, but artists thrive on impossible, namely -in making the impossible possible. And  some have flung their arms wide open to its embrace and in the process astonished us with their works of affirmation and wonder and zeal. All great artists it seems, are marked by pain, but it is the transposing of this pain into their art that produces outstanding vision, truth and beauty, ultimately releasing and overcoming it.

Almost makes you wish you'd signed up for a 9 to 5 easy day job doesn't it?? - No existential hang-ups, curious contemplating of the meaning of life and the self's suffering position in this 'tale of sound and fury'. Never. And besides - you don't really get a choice in it anyway. You may not be tortured to the point of cutting an ear off, but you've probably experienced a small degree of it or more. Not to fear. I see it as an essential litmus test; just a check to see if you're still in 'feeling' order and a push forward in your quest.

I regret that the term 'tortured artist' has become such a stereotypical and throwaway derogatory label nowadays and even necessary somehow to obtain the status of a 'great' artist. (It's not. There are plenty of great artists whose main ingredient is joy and produce amazing work.) But the suffering does exist, it is a true concept. *

And the upside? - Just look what these truly tortured people achieved; look how their work is revered and respected. Look what it has given us. They really did fly the flag for the greatness humanity is capable of under the weight of darkness. Their legacy, and that of all artists, is a gift to us, a gift that if appreciated, will steer us towards the stars and let us glimpse what they did. Realise that there is so much more to this thing we call 'life' than will ever meet the eye. How much of it depends on us and our way of seeing. And great art, it helps us see - it helps us feel.

Well, I didn't mean to patter on so long...! But this is a topic very dear to my heart.  And one that will continue to be such an important discourse in life and in art for a long time to come I'm sure.


*Addendum -  In no way am I glorifying the 'tortured artist' as an ideal or idea or cult status, but rather just acknowledging that it is real, despite how it has evolved into a contrived myth nowadays. And may I also say that today's pretentious suffering artist/emo/goth routine only serves to belittle the real mental anguish and emotional turmoil experienced by some artists, especially those noted authentic (and famous) cases.