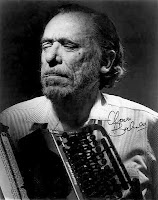 Poetry tells it as it is. Up straight and personal. And you couldn't get no more bullet-point-right-between-the-eyes than Charles Bukowski, famed American poet (otherwise known as Laureate of the low-lifes).  Radical, rebellious, raw and real. Alcoholic, low-life and womaniser. Poet, prose writer and artist. Melancholic, miserable and mean. Also, spectacularly brilliant.

For anyone who thinks poetry is complete upper-class snotty-nosed la-de-dah, read  some Charles Bukowski. He spent most of his life on the bottle, womanising and hanging around bars, unemployed, dispirited and hanging on to the edges of life. His poetry is an account of all this (hence the Laureate nickname).
And it's anything but stuffy. Indeed, it was a while before Bukowski made it onto the reading lists. His work was not mainstream, not anything near. It subverted every tradition and he himself never concerned himself with traditions, never thought of his work as 'literary', merely true.

I must admit, I have just recently discovered Bukowski. And so far, I'm loving his work. It has an edge, raw, but real also. Brave. Couldn't-care-less. Honest. True to the craft. True to himself.

What I really admire about him is how devoted he was to his art. So many poems explore instances of him at his typewriter, pouring words out painstakingly, or easily, practising the act of listening, waiting, while declaring how writing is a curse, and simultaneously a gift. He saw writing as it really was: a compulsion. An urge. A do or die vocation. And living much the same, both a curse and a gift.

On grey days like today, Bukowski is a breath of fresh air, a colouring. He tells things as they are, no bullshit. He injects a good dose of real straight-up truth, a slap in the face of daily dreary sameness, a much-needed wake-up call,  'Your life is your life/don't let it be clubbed into dank submission' (from the outstanding The Laughing Heart). Yes sir. This line has saved me from ennuyed emptiness many a time.

Included are some of my favourite picks below. Be warned some of his poems come with a R rating! (Maybe that's why he's so 'cool' and almost everyone likes him. Adores even.) He's one of America's most popular poets and when you read him, it's easy to see why.

Anyway, if you haven't read him yet, do! You won't be disappointed.

(I've included his infamous writer poem 'So You Want to be a Writer?' on a previous post in March.)

often it is the only
thing
between you and
impossibility.
no drink,
no woman's love,
no wealth
can
match it.
nothing can save
you
except
writing.
it keeps the walls
from
failing.
the hordes from
closing in.
it blasts the
darkness.
writing is the
ultimate
psychiatrist,
the kindliest
god of all the
gods.
writing stalks
death.
it knows no
quit.
and writing
laughs
at itself,
at pain.
it is the last
expectation,
the last
explanation.
that's
what it
is.

your life is your life
don’t let it be clubbed into dank submission.
be on the watch.
there are ways out.
there is a light somewhere.
it may not be much light but
it beats the darkness.
be on the watch.
the gods will offer you chances.
know them.
take them.
you can’t beat death but
you can beat death in life, sometimes.
and the more often you learn to do it,
the more light there will be.
your life is your life.
know it while you have it.
you are marvelous
the gods wait to delight
in you.