Once in a Blue Moon: Personal Poems Inspired by Prose 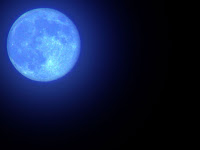 Seeing since it is a Blue Moon tonight and in keeping with the spirit of blue moons meaning that something unusual and seldom should happen (the adage 'once in a blue moon') - I've decided to post some of my own poems here all in the name of random and seldom and blue moon buffoonery.

I can't believe I've been on such a long summer hiatus! Lots of reasons for this, not least of all a sudden onset of extreme indecision - so many posts, so little time! Most of the time my head is bursting with different things to write on and then when I go to write them down, they suddenly don't look so hot-shot and so I decide not to. A case of stage-fright methinks.

So what better way to resolve it than this personal showcasing?!
(Again, I am not fishing for feedback, although it would be quite lovely, or by-the-by, a nitpicking scalpel-wielding criticism - these poems were written solely on and for the inspiration behind them - they are not for publishing or getting beyond their station as mere personal homages. Just for enjoyment sake really.) Also, I think the posting of personal writing is a kind of requirement for personal blogs isn't it? But not so much that it turns into your own narcissistic personal writing page. No no, that wouldn't do at all.

They are poems I like to file under the 'Under the Influence' part of my oeuvre - and no dear readers, before you think it not poems written while intoxicated by alcohol or any other opiate substance - but by other texts, Gatsby for example.

The book has been such a huge influence on me, its poetic telling of having a dream and watching it die and all the tragedy therein, has left an indelible imprint on my psyche. Not to forget the symbolism. Who can forget Fitzgerald's use of the green light in the book that will forever haunt readers after the last few lines? So what I've done here is put to use some of the famous (and my favourite) quotes from the book - can you spot them? - while taking from the story a very personal parable I can relate to.

The other is a personal reinterpretation of Flaubert's tragic heroine Emma Bovary from 'Madame Bovary,' a young married woman who becomes so obsessed with romantic literature and so deprived of romance in her lonely provincial life that after countless disastrous affairs and longings, her only escape from an unromantic existence is offered to her in death, her choice of poison -  arsenic. It's one of those stories that you don't forget easily.

And lastly, a salutation to classic film 'The Wizard of Oz' - because there's just so many metaphors to be found in that!

How about you? Any poems/prose you've written inspired solely by certain stories, films or plays? Do share. Even if it's not usually something you would do - it's a blue moon after all remember!

Not So Great After All

You were the Daisy to my Gatsby:
the dream to a dreamer
horizon to a hapless heart,
realist to an idealist.
You put the stars in my eyes
but they weren’t your currency;
love not enough to please
your gilded gold soul.

But there were summer parties:
blue lawns and green docks,
champagne, whispering and stars,
moments like moths flitting by


and the pearl of a dream shiny
from years of tending, thinking,
wishing  that life really did
begin again in summer;

a brief suspension of snatched silver
kisses and time like a tuning fork
on a star; reality suspended so
past almost become present.  Almost.
You preferred  a safe exit
from an owed nostalgia; love’s loyalty
too much trouble, too much thinking,
too much silver wishing.

And so the count of enchanted objects
diminished: a rose went back
to a rose and in the dawn
the green light grew to a spectre.
The dream became an illusion
then a web, a collision crash of fate
and your betrayal -a pistol
at point blank range.

So much for the green glow
of hope, the orgastic future.
Our boats weren’t made
to beat the current.


Poisoned by pining and looking for love
in a limbo of loneliness,
artificial arranged feelings
and misplaced misdemeanours
shattering a sentimental self.


I don’t want to be a heroine
if it means being heartbroken.
So I drink the arsenic of fantasy
to burn the feeling part
of my heart away.

What the Wizard of Oz Really Means

with a ruby-red heart,
in search of her over-the-rainbow
out-of-reach destination.

A house of fate fallen
on her fear, a tornado tearing through
her timid thoughts.


Following the yellow-brick road
of idealism, stuck at the crossroads
between home and horizon.

On a quest for a bright brain,
a well-oiled heart,
the bold bravery of a lion.

Saved by the good fairy of fortune,
the surprise sparking of inspiration,
melting the wicked witch of guilt.

Off to see the wizard, only
to pull the curtain on the great illusion
and learn the wisdom of intuition.

And a mere click of heels away
from turning black and white reality
into Technicolor wonder.