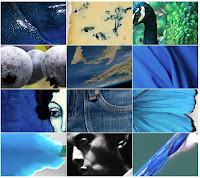 'The whole world, as we experience it visually, comes to us through the mystic realm of colour. Our entire being is nourished by it.' - Hans Hoffmann

What's your favourite colour?? Bet your bottom dollar you say blue? Seems blue is the preferred colour of most people. The New York Times ran this really interesting article on our fascination with the colour blue a few weeks ago (you can read it here:  http://nyti.ms/RTqHk4) which got me to thinking a little about, well...blue. Why is it such an important colour? And almost everyone's favourite? And as a fan of blue myself, it got me to wondering just why we are so taken with it.
Maybe it's because it is so multi-faceted. There's so many different varieties of blue. So many shades: cerulean, turquoise, lapis lazuli, cobalt, ultramarine, aquamarine, duck egg, midnight blue, electric blue, baby blue. (And artists out there will add more!) There are as many shades of blue as there are associations with blue.

Blue is all-inclusive. Blue is worldly. Blue is celestial, ethereal. Blue is the colour of creativity. The colour of uncertainty. Oceanic depths. Sorrow. Moodiness. Infinity.  Smoky jazz. The proverbial blues.

In colour psychology, blue is the colour of calmness. Studies have found that people feel calmer in surroundings with blue hues than in those with brighter colours like red and yellow. Blue is relaxing. Just think of all those tropical blue ocean holiday resorts. As well as a mood soother, it is also the colour of trust and loyalty. Did you know that being referred to as 'true blue' means that you are dependable and trustworthy and committed fully to something?

Feeling 'blue' is a well known euphemism for feeling sad, down in the dumps, under the weather. But why? Where did it come from?  There are several suggestions - the first comes from many old deepwater sailing ship traditions of flying a blue flag if the captain or any of the officers died. Others suggest that because blue is next in line to black on the colour spectrum it was as such  linked to depression and fear. Of course 'the blues' also refers to the popular music genre that exemplifies this feeling. It originated in African-American communities of the Deep South in America around the end of the 19th century, the rhythmic songs of workers eventually becoming known as the 'blues' as they expressed deep melancholy and woes.

The 20th century's most famous artist Picasso took this idea to a new level with his infamous 'blue period'. It marked a period in his art when after a friend died from suicide, he started painting in all blues to mark his sadness. The paintings from this period are all lamentative portraits, his most famous being The Old Guitarist. For him, blue was the colour of sadness and depression, a sort of absence of colour to depict a mournful view of the world. The blue period saw many of Picasso's greatest portraits, mostly of solitary figures set against almost empty backgrounds, the blue palette imparting a mood of melancholy and desolation to images that suggest unhappiness and dejection, poverty, despondency, and despair. Most prevalent among his subjects were the old, the destitute, the blind, the homeless, and the otherwise underprivileged outcasts of society.

It can relate to sadness yes, but also happiness. Bluebirds for example, are a famous symbol of happiness. The song 'Somewhere over the Rainbow' is partly responsible for this: 'where happy little bluebirds sing...' And you can't talk about blue and artists without mentioning Marc Chagall, the Russian Expressionist painter. He used blue in most of his later paintings - it became such a defining and important aspect of his work. And the blue he used doesn't appear melancholy or mournful (although he started to use it more fully after his wife Bella died)- but romantic, dreamlike, spiritual, surreal, emotional, enchanting. It is even referred to now as 'Chagallian blue' so famous and unique to him has it become -  a blue of love, of dreams, of intense emotion, of the soul: 'But perhaps my art is the art of a lunatic, I thought, mere glittering quicksilver, a blue soul breaking in upon my pictures.'

Blue is mysterious. Deep. The ocean is blue. Blue is the colour of the unknown: the fathomless depths of the ocean, the highest reaches of sky. Blue is in the ether around us. Actually when I picture 'ether' I picture blue, a deep dark blue. To me, creativity is blue. That spark of inspiration like the blue at the centre of a flame. And great creative ideas (and most random things) come 'out of the blue', that mysterious place/space of infinite miraculous resources.

Blue is rarity. Ask any gardener about growing blue flowers and they'll answer that the PH of the soil needs to be specially adapted, that only the more seasoned gardeners grow blue flowers successfully. Think about it - there aren't that many blue flowers (and all the more beautiful they are). A blue moon is the term used to describe a rare second full moon in one month. And just look at the sensation Elvis's blue suede shoes caused!

Blue is the colour of the sky, of endless possibility (did you know 'blue sky thinking' refers to outside-the-box creative thinking?). Blue is the colour of the horizon, the big beyond. 'Blueprints' are the name given to detailed etchings and plans.  Blue gives a feeling of distance. Artists use it to to show perspective. This is a good way to understand the energy of the color blue - it allows us to look beyond and increase our perspective outward. And blue is the colour of energy itself - of electricity. It crackles with power.

Blue is the colour of many beautiful things: blue butterflies, peacocks, skies, sapphires, water, eyes. Blue eyes are the most sought after colour of eyes all around the world. Brown is the dominant colour, blue is more rare - only around 8% of the world's population have blue eyes (which may explain the rise in popularity of blue contact lenses. Doctors in California have even come up with a new revolutionary laser treatment that can make eyes blue - by literally zapping the pigment from them...)

Oh and, blue eyes are also associated with innocence. The phrase 'blue-eyed-boy' or 'blue-eyed-girl' is the name given to someone who can do no wrong, who is wholly pure and innocent and sweet. (And on the contrary once again, we have 'blue movies' which refer to the X-rated kind...) 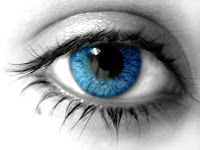 But maybe blue is so pleasing to us as it's an ever-shifting colour. Oceans look blue from far away but when you're wading in them, they're more grey or translucent. Skies, the same. The blue colour we see of skies is only a reflection from the earth's atmosphere, it is not really there. When it comes to blue eyes, the blue colour is really the absence of colour - brown eyes and green eyes are pigmented, blue eyes have no pigment. (Note how babies always have blue eyes when born, but then they change.) Maybe it's because blue is sort of an illusion, a colour only half-there that it so fixes us?

But how can it be half there? It is so intense a colour. Ever seen a piece of cobalt paper in a lab? Squeeze cerulean blue paint from a tube onto a canvas? Blue is at once natural and unnatural; basic and breath-taking. 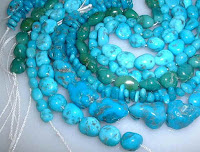 For me, blue is my talisman colour to enhance creativity. My lap-top is a shiny opalescent turquoise blue, my Word files are bordered in blue, my notebooks - maybe all this stems from using blue biro, blue ink to write with. Turquoise, indeed, is the blue gemstone to enhance creativity. The colour of our throat chakra or communicative energy space is blue and so turquoise resonates with that. Blue is the colour of communication. 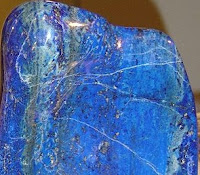 It is also the colour of the spiritual and celestial. Lapis lazuli stone was often considered to have magical elements. The Archangel Michael resonates with the dark blue colour of this stone. The ancient Egyptians used lapis lazuli to represent Heaven, with its dark blue colour and gold flecks. In the Catholic religion, the Virgin Mary wears blue and the colour has become exclusively associated with her. Blue, blue-green, and green are sacred colors in Iran where they symbolize paradise In India, paintings of the god Krishna often depict him as having blue skin. In Greece the color blue is believed to ward off the evil eye. Indigo, a deep blue, is the colour of our third eye chakra, the portal to our spiritual consciousness.

Blue is not an earthy colour - we do not eat blue, (well, apart from blueberries, which are technically more purple in tone). But no, we don't consume any blue foods. But it is an everyday colour. Apart from the presence of it in the sky it's popular in clothing - blue jeans have become an iconic fashion statement of the modern age. They are the symbol of casualness, hard-working, tough, take-it-easy lifestyle. In contrast to the phrase 'blue-collar' which refers to the more upper end of society. Blue is the colour of airmail and of post-boxes in America (maybe because of the sky?) In Ireland, you'll be met by a bright blue sign announcing the name of each street.

To artists, blue is a true colour - 'Blue is the only color which maintains its own character in all its tones... it will always stay blue; whereas yellow is blackened in its shades, and fades away when lightened; red when darkened becomes brown, and diluted with white is no longer red, but another color - pink.' -Raoul Dufy, (French Fauvist Painter, 1877-1953.)
'Blueness doth express trueness ' - the poet Ben Jonson said, and art historian John Ruskin noted that, 'Blue colour is everlastingly appointed by the Deity to be a source of delight.'

A source of delight - yes that's it! Blue is a constant source of delight. From the sky to turquoise jewellery to blue LED lights, to my own personal favourite - bubblegum ice-cream (yum!). It is the colour of the natural world, the celestial world, beauty and dreams and truth.

Is blue your favourite colour? If so, why? Are they any other associations you have with blue?

I'll leave you with Joni Mitchell's song 'Blue' (so many songs too with blue in their title!) sung here by Sarah MacLachlan.