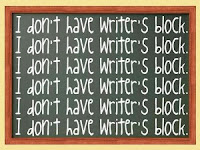 Oh God. The dreaded 'b' word strikes again... But at least I'm in good company. So here I take Charles Bukowski's advice and write about writer's block - as it's better that than not writing anything at all.

Because writing nothing is not an option. If I go several days without writing anything, I feel hollow and emptied out. I don't feel right. And it's a horrible feeling. For writing puts me in tune with the world; without it I'm all out of tune, distanced, disembodied.

Writer's block is a contentious issue among writers: some insist it doesn't exist and others swear by its debilitating powers. It's a bit of a taboo issue really. And lately, it's become a tired cliché.

But that's not to say it's not real.

Sometimes the block seems everlasting, other times fleeting. But one consistency it has is that it's not pleasant. And the longer it lingers, the worse it gets. Like fear in a way. It has to be nipped in the bud right away or else it festers. (Hmm, I wish I could take this advice I'm writing - I'm so far into the block's chronic clutches at this stage...)

Of what I know about writer's block - it is deeply personal and specific. Writers get blocked for different reasons - the easy kind of block being the one which involves the story, a plot question or such. The worst is the psychological block - what if I'm not good enough? The crippling self-doubt that can paralyze a writer.

But I think John Rogers has it right - that it's a 'thinking' block more than anything else; and that the only way out of it is to write.

If that's true, then here's my first attempt to write out of it.

Anyone else out there suffer from writer's block? Care to share your stories, fears, remedies...??

'Discipline allows magic. To be a writer is to be the very best of assassins. You do not sit down and write every day to force the Muse to show up. You get into the habit of writing every day so that when she shows up, you have the maximum chance of catching her, bashing her on the head, and squeezing every last drop out of that bitch.' ~ Lili St Crow

Writing about writer's block is better than not writing at all.' ~ Charles Bukowski

'Biting my truant pen, beating myself for spite: "Fool!" said my muse to me, "look in thy heart, and write.' ~ Sir Philip Sidney

'All writing is difficult. The most you can hope for is a day when it goes reasonably easily. Plumbers don’t get plumber’s block, and doctors don’t get doctor’s block; why should writers be the only profession that gives a special name to the difficulty of working, and then expects sympathy for it?' ~ Philip Pullman

'What I try to do is write. I may write for two weeks ‘the cat sat on the mat, that is that, not a rat,’ … And it might be just the most boring and awful stuff. But I try. When I’m writing, I write. And then it’s as if the muse is convinced that I’m serious and says, ‘Okay. Okay. I’ll come.' ~ Maya Angelou

'There’s no such thing as writer’s block. That was invented by people in California who couldn’t write.' ~Terry Pratchett

'Being a real writer means being able to do the work on a bad day.' ~ Norman Mailer