The Importance of Being Ernest: Hemingway's Wise Words 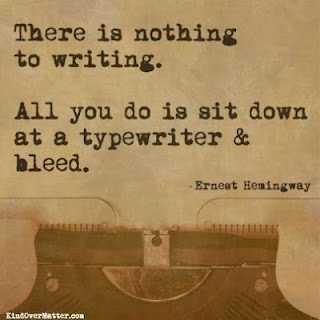 Hemingway knew the score. Yep. He was as straight-forward as a pistol at point-blank range, a whiskey neat, or a blunt stripped sentence.

Hemingway's prose is infamous for its pared-down, direct style. But so too are his sayings. He was harsh, up-front, abrupt and blunt.

I remember once watching one of those late-night murder/mystery shows where a writer was the main character involved. A writer with writer's block to be exact. (*For more on this portrayal - see two posts ago...!)  But anyway, he was being haunted by the ghost of Ernest Hemingway. Yes, none other.

He would appear in his room at night with the crashing of bulls or gunfire behind him. Once he even turned up with a rifle pointed at said frightened writer. The poor fellow was besides himself, but eventually came to realise that Hemingway's spectre was only terrorizing him out of his block.

I can't remember how exactly it turned out - but I will never forget that image of Hemingway - old, grey and bearded - as a relentless bellowing scary type of fellow! Haunting mopey writers with his blunt declarations, forcing an ultimatum on them - if you're a writer, write for God's sake! - or something to that effect.

Anyway, here are a few of his wise words. The unabashed, unedited truth. (Approach with caution...!) 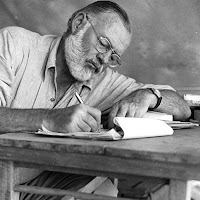 There is nothing to writing. All you do is sit down at a typewriter and bleed.

A writer should write what he has to say and not speak it.

There is no rule on how to write. Sometimes it comes easily and perfectly; sometimes it's like drilling rock and then blasting it out with charges.

In order to write about life, first you must live it!

Prose is architecture, not interior decoration, and the Baroque is over.

A writer's problem does not change. It is always how to write truly and having found out what is true to project it in such a way that it becomes part of the experience of the person who reads it.
Do you suffer when you write? I don't at all. Suffer like a bastard when I don't write, or just before, and feel empty and fucked out afterwards. But never feel as good as while writing.

Writing, at its best, is a lonely life. Organizations for writers palliate the writer's loneliness, but I doubt if they improve his writing. He grows in public stature as he sheds his loneliness and often his work deteriorates. For he does his work alone and if he is a good enough writer he must face eternity, or the lack of it, each day.

God knows, people who are paid to have attitudes toward things, professional critics, make me sick; camp-following eunuchs of literature.

I have drunk since I was fifteen and few things have given me more pleasure. When you work hard all day with your head and know you must work again the next day what else can change your ideas and make them run on a different plane like whisky?.... Modern life, too, is often a mechanical oppression and liquor is the only mechanical relief.

An intelligent man is sometimes forced to be drunk to spend time with his fools.

All good books have one thing in common - they are truer than if they had really happened.

The good parts of a book may be only something a writer is lucky enough to overhear or it may be the wreck of his whole damn life — and one is as good as the other.

It is all very well for you to write simply and the simpler the better. But do not start to think so damned simply. Know how complicated it is and then state it simply.

All you have to do is write one true sentence. Write the truest sentence that you know.

The most essential gift for a good writer is a built-in, shock-proof, shit detector. This is the writer's radar and all great writers have had it.

Forget your personal tragedy. We are all bitched from the start and you especially have to be hurt like hell before you can write seriously. But when you get the damned hurt use it — don't cheat with it.

The most solid advice for a writer is this, I think: try to learn to breathe deeply, really to taste food when you eat, and when you sleep really to sleep. Try as much as possible to be wholly alive with all your might, and when you laugh, laugh like hell. And when you get angry, get good and angry. Try to be alive. You will be dead soon enough.

We are all apprentices in a craft where no one ever becomes a master.