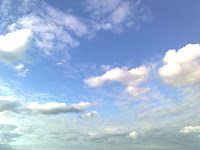 Aren't clouds the most glorious things?

Here in Ireland, when we are privy to blue skies, you'll find me with my face tilted upwards. Soaking up the sun yes, but more so as of lately revelling in not just the blueness, but the great white clouds that accompany it.

Yes, the clouds! Not those overcast grey monstrosities no, but the fluffy white ones floating around the blue like ships or mountains, or super-sized cotton wool. They're so huge and vast and majestic. So perfectly shaped and sculpted. So grand.


There's something just so optimistically picture-perfect about a blue sky with some cumulus clouds (the big fluffy-on-top-ones). They succeed in making the sky seem so endless. So mysterious. We're more aware of our planetary orbit while clouds are shimmying by in the sky. Cloud-laden skies remind us that we are moving through this universe, and time is moving, even though we ourselves may think we are standing still. Clouds beg to differ. They yell out horizon like nothing else.


And get this, they're not just white. I always remember a line from Tracy Chevalier's novel 'Girl With a Pearl Earring' in which the artist Vermeer talks about painting in relation to clouds. How full of colour they are - lilac lined and gold and silver-flecked and navy and purple. And this is not just from an artist's eye. Light plays on them offering a palette of colours.


I remember my first ever plane journey. It was dusk. We were above the clouds and the sun's light had them billowed in gold. Light streaming through cracks and crevasses and it was just beautiful. Ethereal. No wonder then, that clouds were referred to as 'essences' before being scientifically explained. And to this day I'm still delightfully amazed at the 'angel rays' of light dusk's stage show reveals. Sunsets you may argue are grandiose, but I've always been more taken with the moment just before the colour, the lit anticipation, when the sun dipping its head in a crown of clouds shines a light on all their glory.


But back to the blue. There's nothing happier and no natural phenomenon that induces happiness as much as blue skies I think.  And that got me to snapping (photographer I am not - spontaneous snapper I am...) super-awedly (new word creations are a symptom of giddy fascination!) and came up with a few pictures (below) that are most in need of words I think.

And that got me to googling these sky creations and discovering names like stratus and cirrus and cumulus. (And the Irish word for cloudy keeps popping into my head: 'scammalach' - the sound of which perfectly captures the fluffy volume and appearance I think!)

Which further led me to a poem by Carol Ann Duffy about the Londoner who first named clouds, Luke Howard.  Imagine that. Being so entranced by the great sentries of the sky as to create names for them, scientific or otherwise. Now that, as Carol Ann so powerfully points out, is pure love.


(and PS/ most utterly writerly happy again on my new turquoise HP Pavillion :)

Smitten,
he stared up evermore; saw
a meteor’s fiery spurt,
the clamouring stars;
what the moon wouldn’t do;
but loved clouds most-
dragons and unicorns;
Hamlet’s camels, weasels and whales;
the heads of heroes;
the sword of Excalibur, lit
by the setting sun. Mackerel sky,
mackerel sky, not long wet,
not long dry. 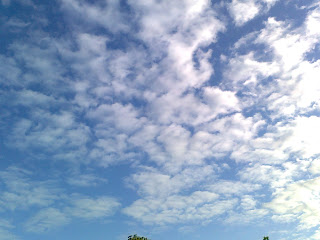 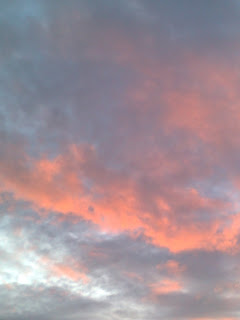 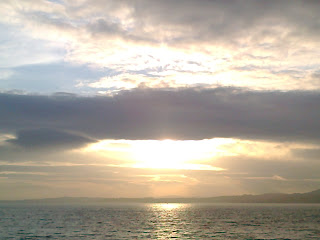 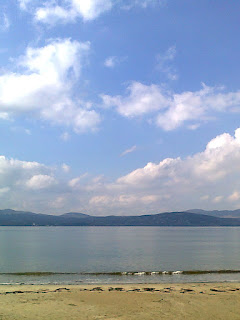 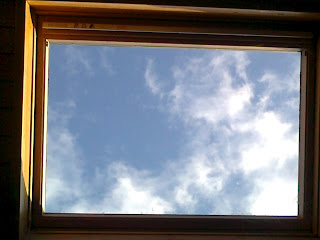 *All photos taken proudly by me!
Posted by Siobhán at 15:13