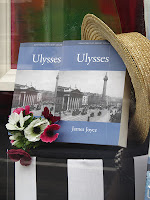 Today in Ireland we celebrate Bloomsday. Which is to say we celebrate Irish writer James Joyce, namely his infamous novel Ulysses.

Bloomsday has become quite the institution in Ireland the past few years. Especially in Dublin with all kinds of events like walking tours and readings taking place.

I have to admit, I'm not that huge a fan of Joyce. He's a brilliant writer no doubt, a truly original and trend-setting writer, writing as he was in the Modernist tradition, which set an entire new precedent for literature.

Maybe it's because we were force-fed him at college - University College Dublin that is, where Joyce himself studied - and as such had the pleasure (and challenge) of studying a heavily saturated compulsory course list of Joycean (yep he's so great he even has an adjective named after him!) content. Buildings everywhere on campus are named after Joyce. The leading authorities on Joyce in this country have often originated and frequently taught in UCD. But I never really got into Joyce. We had to read Portrait of the Artist as a Young Man and Dubliners which I both enjoyed, especially Dubliners, which at the time, was like an intimate companion guide to the experience (and epiphanies ha!) of living in the city. Ulysses, his masterpiece, we only touched on, looking briefly at selected episodes in the novel.

Everyone's heard of it - but how many can hold up their hands and say that they've actually read it? It has the reputation of being one of the most impenetrable books ever! Not least because of its length (it's a tome for sure, a doorstop, approximately 260,000 words!), but more so because of its maze-like structure, rambling vague plot, modernist stream-of-consciousness prose and all-over enigmatic meandering.

So what is it about anyway? Well, it chronicles the passage of the main character, Leopold Bloom through Dublin during an ordinary day, 16 June 1904 (notably, the day of Joyce's first date with his future wife Nora Barnacle.) 'Ulysses' is the Latinised name of Odysseus, the hero of Homer's epic The Odyssey, and the novel is a similar 'quest' one, following the structure of Homer's epic with chapters listed as correspondng episodes, eg Circe, The Sirens, Ithaca etc. It explores the 'epic' nature of everyday life, with experimental prose that delves deep into the human psyche and indeed the aesthetics of literature.


It wasn't until later, many years post-college, when I attended a talk on the book by a very enthusiastic Joyce lover, that I began to warm to it. He recommended that we 'enjoy' the flow of it, rather than get enmeshed in trying to find meaning in it, and introduced us to the remarkable beauty of its language with well-chosen excerpts and an enthused reading of Molly Bloom's ecstatic life-affirming monologue at the end of the book. I'll admit, I was impressed.

It's no denying the writing is revelatory and beautiful and full of wonderful neologisms. Stephen Daedalus' observations of a dog on the beach in the Proteus episode illustrate this:
'At the lacefringe of the tide he halted with stiff forehoofs, seawardpointed ears. His snout lifted barked at the wavenoise, herds of seamorse. They serpented towards his feet, curling, unfurling many crests, every ninth, breaking, plashing, from far, from farther out, waves and waves.' It's a text that begs to be read aloud - the sound of the language in this instance, as immersive and hypnotic as the sea itself.

And of course, it's hard to deny the exhilarating quality of the language of Molly Bloom's infamous soliliquy at the end of the book, consisting of eight run-on-sentences full of urgency and contemplation (punctuated by many affirmative uses of the word 'Yes'  (*You can read the full soliloquy here) But here's the finale of it: 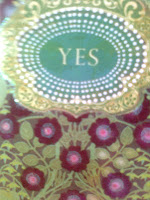 'O and the sea the sea crimson sometimes like fire and the glorious sunsets and the figtrees in the Alameda gardens yes and all the queer little streets and the pink and blue and yellow houses and the rosegardens and the jessamine and geraniums and cactuses and Gibraltar as a girl where I was a Flower of the mountain yes when I put the rose in my hair like the Andalusian girls used or shall I wear a red yes and how he kissed me under the Moorish wall and I thought well as well him as another and then I asked him with my eyes to ask again yes and then he asked me would I yes to say yes my mountain flower and first I put my arms around him yes and drew him down to me so he could feel my breasts all perfume yes and his heart was going like mad and yes I said yes I will Yes.'

But I think the lure of the book also lies in its celebration of Dublin. Bloomsday is in a way, a celebratory navigation of the city itself. From Sandymount Strand to Sandycove, Barney Kiernans pub to Sweny's Chemist, where Bloomsday revellers repeat Leopold Bloom's buying of lemon soap, now a staunch tourist souvenir of the city and the chemist itself a venue for regular readings of the novel. Yep, Bloomsday attracts not only Joycean admirees but also fans of Dublin itself.  (You can see more on locations in Ulysses here)

Ulysses is just one of those books I suppose. The kind that pique interest, curiousity and controversy, (in Joyce's day, if not today too!), confuse and compel, cause argument and admiration. I suppose it's a book you either love or hate; there is no in-between. Or, is there?

To my college self, new to literature, Ulysses seemed not only impenetrable, but a tad pretentious. It was a book I'd love to have said I'd read, but without the bother of actually having to read it! But now, my mind has changed on this matter (even though I have the tendency to steer clear of doorstop tomes!) Now it seems like a curious challenge, one which I no longer shrink from, but am intrigued and attracted by. A book I would actually like to read, more than say I had read it. If you know what I mean...!

And I think Bloomsday has a lot to do with it. There are a lot of Joyce lovers out there, and a lot of Ulysses lovers too it seems. And on Bloomsday, they seem to be having a really great time. It's enough to make you want to read the book, isn't it? To see what all the fuss is about? 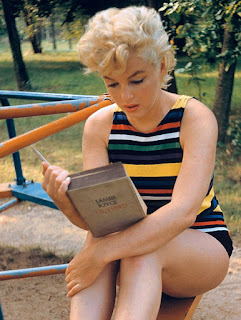 *Even Marilyn Monroe was a fan!