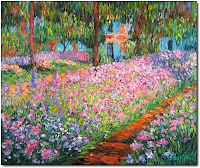 'More than anything, I must have flowers, always and always.' ~ Claude Monet


June is the month of big colourful blooms. And being a flower lover, I just have to have a say on them here.

I love flowers so much.  As Monet said, I must have them! (He cites flowers as one of the main reasons he became an artist). They lift the spirits like nothing else - 'flowers feed the soul.' They are a constant reminder of beauty and more than that, a sublime everyday presence in our world. I can't be without them! In the garden, in a vase, in a picture (in agreement with Vita-Sackville West - 'a flowerless room is a soulless room.'). Even the mere thought of them is enough of a reminder that beauty exists and is in surplus supply all around us.
It's not just artists that have a profound love for flowers, but poets and writers too. As writer Iris Murdoch commented, 'People from a planet without flowers would think we must be mad with joy the whole time to have such things about us.' Indeed! (And some of us are!) 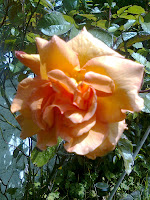 June is the month when the full fanfare of flowers come into bloom. Especially roses. Roses are the flower of the month, the harbingers of summer. So lovely to see them blooming everywhere, bursting colour upon their surrounds and sweet fragrance too. There's nothing more perfect than the composition of a rose. Look how perfect its petals fold upon each other, how delicately and symmetrically. You couldn't replicate it if you tried! It's a work of art.
Lots of interesting facts about roses too. Did you know that they originally came from the Middle East via the Crusades? That despite their eloquent beauty, they're pretty tough and don't need much in the way of preening and pruning? (My type of flower!) They're used in so many different sayings, most especially as a motif for enjoying life, ie.  'to smell the roses' and as an emblem of beauty and an appreciation of beauty, as Anais Nin says, 'I'd rather have roses on my table than diamonds on my neck.' They're associated with physical beauty too. To be deemed a 'rose' is to be acknowledged as pretty. Cleopatra is said to have bathed in rose petals to preserve her beauty. The scent of roses today is harvested for all kinds of perfumes. And not only is their appearance soothing, but rose oil used in skin tonics and the like, has a calming effect not only on the skin, but on moods too. (tried and tested!) 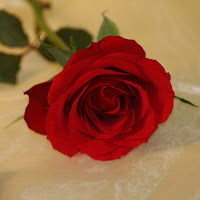 Roses are famed as the most beautiful flower of all. It's hard not to swoon at them. Maybe that's why they've become the official flower and symbol of romance? What would Valentine's Day be without a red rose? I mentioned how artists are taken with flowers, but poets and writers are too. Especially poets, with odes to this flower especially making a famous sonnet or two throughout the decades. Most famous of them perhaps is Robert Burns' 'My Love is Like a Red Red Rose', which goes along the lines of:
One poet who I'm particularly fond of, Alice Oswald, has a book dedicated solely to flowers, 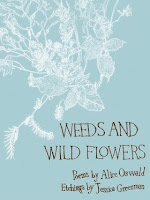 well,  wildflowers to be exact, in which she pens a poem to flowers we sometimes take for granted, describing them in humanly terms, attributing endearing personalities and stories to them.
She asserts that "flowers are recognisably ourselves elsewhere", and sets to work to achieve that recognition, "using the names of flowers to summon up the flora of the psyche". In 'Daisy', the flower becomes a "quiet child", too small for the author "to look in her open eye". The poem "Snowdrop" imagines "a pale and pining girl, head bowed, heart gnawed" very weak, broken-hearted, almost dead, "But what a beauty, what a mighty power/of patience kept intact is now in flower." (You can read 'Daisy' and 'Iris' here) Louise Gluck is another poet who has released a book on the theme of flowers, 'The Wild Iris.' In it, she compares life and relationships to flowers in a garden. (Read more on it here)
There's a lot more to flowers than meets the eye. Like language for instance. Yep. Did you know that flowers have/are a language of their own? That each one represents something? Well I didn't either until I read the novel 'The Language of Flowers' by Vanessa Diffenbaugh: 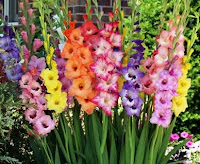 But it wasn't all associated with romance. Give someone a common thistle and what you're really saying is 'misanthropy' - i.e. stay away from me, I don't like you along with the rest of the human race, grrrr! The meanings were derived in some cases from how the flower looked, its growing characteristics and things it was associated with. For example, cherry blossoms mean 'impermanence', given their very brief blooming period. Daffodils mean new beginnings, arising as they do as one of the first flowers of Spring. Roses got their association with romance in part from their beauty and pain (those damn thorns). Daisies mean cheerfulness, and who isn't cheered by the sight of sprawling daisies on a summer lawn? And one of my favourites, gladioli (pictured left), which look like spears, say: 'You pierce my heart'. Of course.

Incidentally, the language of flowers has come back into vogue today with wedding bouquets. In the UK, the newspapers reported on Kate Middleton's bridal bouquet when she married Prince William. Apparently she chose all the right ones for a long-lasting marriage: hyacinth - for constancy of love and ivy for fidelity, along with lily-of-the-valley meaning a return of happiness. (Just like in the novel, Victoria's wedding bouquets prove to be a magic success.)

It's fascinating really, this language of flowers. But I  do say I prefer its meanings in everyday life rather than just weddings (-why do flowers always get associated primarily with weddings? It's a bit biased if you ask me!) Flowers should flourish in everyday life! And the language of flowers is something that can be incorporated in a more general way, for example giving someone a geranium is a mark of  true friendship. You can read more on all those meanings here! (But a warning, Google around, as some of them are inconsistent with each other! I'm going by the dictionary listed in the novel). Look up your favourite flower and see what it means? Could it be related to your personality, your emotions? Or next time someone brings you flowers, you'll be able to read into the situation further! 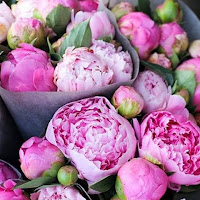 Now, I just can't end without saying a word on my favourite flower: peonies. Peonies are a type of rose, the most glorious of all the roses if you ask me. Their big fat and fluffy pink blooms remind me of cheerleader pom-poms or taffeta skirts. They're the biggest of all the blooms in the flower family (huge!) and loud in their bubble-gum pink petals.  Showy yes, but did you know that one of their flower meanings is bashfulness?  One of their other meanings is (wait for it) - anger. Anger, hmm. Maybe because peony buds look like clenched fists? They're almost as big as them. And tight and closed like you are when you're angry. And then when they burst into bloom, maybe it resembles the explosion of anger a little - all that pinkness of fury. Ha!

One of the reasons why I like them (despite the anger meaning, not!) is that they're hard to get, like a special delicacy. Their blooming season is the end of June, and when they do bloom, like the cherry blossom, they only last a short time. (But oh, while they last!!) Hardly any shops stock them, only really good florists. And because of this, they're quite expensive and elusive.

There's just something very special about peonies. I love their sugar-sweet colour, the pinkest of pinks, like blushes of or all the flush of youth (they do come in a darker tone too, but I love the light pink one). I love how they look like lollipops when they're not yet in bloom, a crafty disguise that conceals perfectly the frilled exuberance to come, like an overlooked ugly duckling that turns into a glorious swan. Their big magnaminous blooms, like a declaration, seem a mascot of happiness and sweetness. When you pass peonies in a street flower vendor's, they're the whoa! flowers that catch your eye first. Big and blustering and making a fuss. Not reserved or regal like other roses or perfect. Peonies don't care about elegance; they're all about blooming, the bigger the better. And instead of refined perfection, they go in more for big buoyant personality. 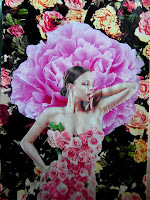 They're a much more romantic flower too I think than your red roses. They're more spontaneous for one: they make a big bold statement rather than a clichéd neat and defined one. They're far more able to express bountiful loving sentiments than small roses with their abundant mille-fois of petals and big smiling faces. A bouquet of peonies from a lover would be an enthusiastic declaration of love, all swagger and swoon, and blushing delight! They seem to denote an abundance of love. Yes, maybe that's what I see in them. An abundance and a willingness to open your heart, open it wide, until it's at a big beautiful bursting point.

Well, that's my take on them. Below is Mary Oliver's poem on peonies which reveals a little more about what they mean and represent. To her they are emblems of beauty, 'beauty the brave, the exemplary, blazing open.' Yes, they're a brave kind of flower, with their blatant beauty, impossible to ignore. But more than that, they are 'reckless' in their blooming, a testament to the fact that they're alive and desirous to make the most of it, as are we, as should we. Maybe they're what a self could look like in full bloom??

Oh, there's so much more that you could say about peonies. And roses. And any kind of flowers! But maybe to analyse them too much would be to destroy their endless capacity for wonder and delight?

Okay, so here I stop. What's your favourite flower, and why? What summer bloom makes you happy?

Smelling the roses, literally and metaphorically - 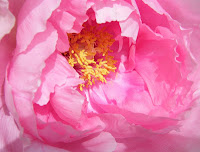 This morning the green fists of the peonies are getting ready
to break my heart
as the sun rises,
as the sun strokes them with his old, buttery fingers

and they open--
pools of lace,
white and pink--
and all day the black ants climb over them,

boring their deep and mysterious holes
into the curls,
craving the sweet sap,
taking it away

to their dark, underground cities--
and all day
under the shifty wind,
as in a dance to the great wedding,

the flowers bend their bright bodies,
and tip their fragrance to the air,
and rise,
their red stems holding

all that dampness and recklessness
gladly and lightly,
and there it is again--
beauty the brave, the exemplary,

blazing open.
Do you love this world?
Do you cherish your humble and silky life?
Do you adore the green grass, with its terror beneath?

Do you also hurry, half-dressed and barefoot, into the garden,
and softly,
and exclaiming of their dearness,
fill your arms with the white and pink flowers,

with their honeyed heaviness, their lush trembling,
their eagerness
to be wild and perfect for a moment, before they are
nothing, forever?