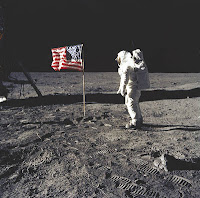 'One small step for man, one giant leap for mankind.'

Following the death of Neil Armstrong, the 1969 moon landing looms large in the public consciousness once again. But what about in the creative one?

What was surprising to read in some commentary about the moon landing was how it was never taken up to the degree it deserved by the arts. Although a magnificent feat for television, it was not 'communicated' as well as it might have been to the general public. In journalism sure, but not in fiction, poetry or art. Some commentators are even of the opinion that among those sent to the moon, there should have been a writer, artist or poet amongst them to transcribe all that other-worldliness into an explanatory and significant discourse.

That may seem a tad extreme - to have a writer tucked into a space shuttle complete with notebook and pen - but not when you think of how artists and writers are incorporated into areas of exploration today. For example, did you know that the American National Science Foundation provides residencies for artists and writers in its Antarctic base? It's a program  that's open to the whole world and one which has yielded tremendous artistic results. (One of the most concise written accounts of the Antarctic - scientifically, historically, psychologically and creatively - comes from one such accepted British writer, Sara Wheeler in 'Travels in Antarctica')

There are a lot of critical articles written on this literary lack of engagement with the lunar mission. It seems strange to these critics how the moon, such an iconic muse of arists and writers from Time began, was missed by literature and art's probing eyes after the 1969 landing. It did not give rise to a surge in science-fiction. And considering the influence of  close historical happenings - the previous World Wars as well as the age of exploration - on art and literature, the moon landing comes up as considerably low-key.

And it's got me to thinking why exactly.

Was it because the reality of landing on that miraculous muse put an end to all the dreaming of it? Was the scientific actuality of it not enough to live up to the centuries-long poetic contemplation? Did the metaphorical lassoing of it have much more pull than the real scientific one? Did the reality not live up to the imagining? It seems the 'leap' all artists and writers and poets took in imagining the moon, could not be followed up on by the simple 'step' of recording responses to the actual moon landing.  W.H Auden, in his poem 'Moon Landing' writes more of a rebuke than a reaction to the Apollo 11 triumph, calling it a 'grand gesture', before reverting to his preferred poetic muse image of it -  'my Moon still queens the Heavens.'

This in a way, corresponds to the sobering reality of modern space travel. I was also quite surprised to learn that Neil Armstrong himself was dismayed at the lack of impetus and diminished ambitions on Nasa's behalf in relation to lunar missions in the past few years. And downright shocked to learn that the last person to walk on the moon was in 1972! Imagine. Man first walks on the moon in 1969 in what seems the beginning of a new age of space exploration, but what seemed more so to be the beginning of the end. Fait accompli.

It seems once a dream is achieved, it fades away. Or when it is examined in detail, held up to the probing light of analysis, it fails to live up to its ideal: it appears 'seamed with scars and shadow-soiled/a half faced sycophant, its glitter borrowed.'

This idea is explored brilliantly in the poem below by May Swenson describing the 1969 moon landing, one of the few contemporary poets at the time who rose to the challenge of describing the reality of the moon landing. And just look at the amazing descriptions - curious and fearful and cautious, but real, unflinchingly real. I think she may have touched upon in this poem a mentality that relates not just to the moon landing, but to the general tension that exists between real and ideal, reality and dream; the ever-puzzling question of whether flesh can rub with symbol?, whether we can withstand to witness our ball of light turned to iron? 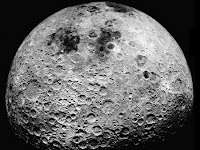 Landing on the Moon - May Swenson

When in the mask of night there shone that cut,
we were riddled. A probe reached down
and stroked some nerve in us,
as if the glint from a wizard's eye, of silver,
slanted out of the mask of the unknown-
pit of riddles, the scratch-marked sky.

When, albino bowl on cloth of jet,
it spilled its virile rays,
our eyes enlarged, our blood reared with the waves.
We craved its secret, but unreachable
it held away from us, chilly and frail.
Distance kept it magnate. Enigma made it white.

When we learned to read it with our rod,
reflected light revealed
a lead mirror, a bruised shield
seamed with scars and shadow-soiled.
A half faced sycophant, its glitter borrowed,
rode around our throne.

On the moon there shines earth light
as moonlight shines upon the earth…
If on its obsidian we set our weightless foot,
and sniff no wind, and lick no rain
and feel no gauze between us and the Fire
will we trot its grassless skull, sick for the homelike shade?

Naked to the earth-beam we shall be,
who have arrived to map an apparition,
who walk upon the forehead of a myth.
Can flesh rub with symbol? If our ball
be iron, and not light, our earliest wish
eclipses. Dare we land upon a dream?