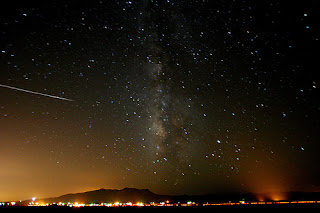 Anyone for shooting stars? The Perseid meteor shower occurs this weekend.  How exciting!

The Perseids occur in early August each year and are the most prolific of meteor showers. They are so-called because the point from which they appear to arise lies in the constellation of Perseus, named after Perseus from Greek mythology.

I don't know about you, but I find shooting stars and meteor showers magical. (Even though I haven't actually caught sight of one - yet.)

What is it about them that takes people out in their hundreds into the wee small hours of the morning, eyes fixed on sky, desperate for one glimpse of a momentary fleeting occurrence?

Maybe it's the cosmic significance - a reminder that there is a great big universe out there after all, a magnificent, magical universe, capable of great feats and wonders. Or maybe it's the connotations, the metaphorical associations, shooting stars as akin to revelations and realisations. Or could it be that they're a cosmic manifestation of our emotional meditations and reveries, a representation of sudden and sparking possibilities, lit upon the horizon as once-off opportunities that are gone in an instant, but leave their trail forever emblazoned on the heart? Or maybe they just point our hearts and heads skywards, stargazing, to something bigger than ourselves,  to the contemplation of the big bang and the world beyond this one? Or maybe, simply,  its just for the sheer luck and joy of seeing one and wishing upon it!

Me, I love their metaphorical associations: namely, revelations and realisations, epiphanies and moments of awed wonder. I love what they can mean.  Anything really, and everything.

So that's why I'll be out there in the dark tonight, looking skywards, stargazing, as I'm sure many of you will be.

Happy stargazing - of whatever kind it may be! 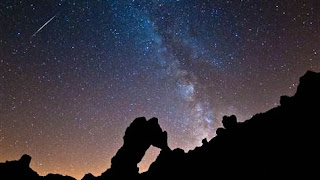 I couldn't find many poems on meteor showers, (except for one I've posted on my poem a day blog -The Mystery of Meteors) so here's one I made earlier (last year) of my own...

Every August, they make their appearance -
much-hoped for and expected, anticipated,
with all the precision of logistics, all the wishing
of children laid out under stars.

Simply, some debris passing through the atmosphere,
something that gets lost in circumstance,
in cloud-cover, too-bright skies or early dark,
in our forgetting to look up.

But metaphorically, really, a shower of sentiments,
an instantaneous scattering of sparks, all
the rapid flaring and fire of revelation, possibilities
burning the spot where they land.

And a most astounding fact indeed: we are made of stardust. We are not only in this universe, but the universe is within us...

And here's a sound of all the excitement of meteor watching, of shooting stars on the horizon, and in the heart....