What prompts this post is the host of upcoming book-to-film adaptations planned for the near future. Seems like every book I've read recently or am in the process of reading is being made into a film!

For example, I finally (after many years of avoidance) have picked up Anna Karenina only to see now that there's a lavish new screen version planned for release in September, which I must admit, has spurned me on in my consumption of the novel. I am not a fan of doorstop books, especially Russian classics, but now that I know my efforts will be rewarded by a screen version at the end of it has motivated me somewhat. (And I think this kind of motivation is much-needed for the classics....)

Last week I was drawn to David Mitchell's Cloud Atlas seeing since it was one of those books I always meant to get round to but never did. Not long after buying it, I was shocked and surprised to stumble upon a trailer for the upcoming movie version, an epic blockbuster by the looks of it, starring epic blockbuster actor Tom Hanks and lots of jaw- dropping visuals. I was glad I made the purchase then. Because there's nothing worse than watching a film adaptation of a book before reading the actual book.  You miss out on so much!

It's a given fact that most books lose their greatness when transposed to the big screen. There's just too many to mention right off, but recent ones include a rather disappointing and lacklustre Hunger Games, whose pages I was riveted to, but which came off as nothing more than a superficial special effects teenage romp as a movie, with all its subtle commentaries and graphic violence - the very lynchpins of the trilogy itself - completely lost in translation. Which was ok for those of us who had already read the books and been converted as fans, but not for those who were depending on the film as an invitation to read the books. Most would-be readers slunk off most unimpressed.

The Help was another book that, although not the worst film adaptation, failed to retain all the magic momentum and warmth and humour of the prose. In my opinion, it came out rather serious and monotone and missed out on all the greatest moments of the book. Bestseller yes, Oscar winning movie, no.

Extremely Loud & Incredibly Close was a novel that I doubted would survive as a film. But it did. It was a gallant attempt to capture the spirit of the book. But saying that, it was not as good as the book.  Films just can't capture the emotional nuances of a book, the subtleties fall through the film cracks. And for all of film's remarkable feats - Technicolor and visual effects and vibrant characterisation, its ability to render a scene powerfully, it can't communicate the finer, emotional and sensitive points of 'what lies between the lines', that only words alone can evoke.

This is especially true for Jonathan Safron Foer's unique novel. If you've seen the film but not read the book you've only gotten half the story! The main story of that novel lies partly in its original use of language. (If you've read it , you'll know exactly what I mean - the dense type, the blank pages, the red circles!, the different voices and fonts, the inclusion of pictures, the many detailed descriptions Oskar imbues his world with - in short, the literary devices that gives the book its affecting quality.)

I'm not knocking book adaptations entirely. There are some books that have benefited from big screen adaptations. A F. Scott Fitzgerald short story was converted into an epic almost 3 hour reverie on life, love, age and youth in The Curious Case of Benjamin Button. Alice Oswald's The Lovely Bones came visually alive and all the more disturbing in its film adaptation. Salmon Fishing in the Yemen was made more dynamic and dramatic in this year's screen version with Ewan Mc Gregor. It managed to speed up the story's slow progression and sieve the finer moments into symbolic significance. Nicholas Sparks' mushy romantic novels are direly written but make great romantic flicks (The Notebook, Message in a Bottle, The Last Song, Nights at Rodanthe, The Lucky One.) The big screen adds substance, colour and character as well as stunning locations (and good soundtracks) to his skeletal, superficial prose.

Upcoming book-to-film adaptations that I'm wary of include Life of Pi by Yann Martel, one of my absolutely favourite books ever. It's a completely absorbing book with a completely absorbing premise: a young boy, marooned at sea, with a tiger for company on a small lifeboat in the Pacific.  It's a book you'd read in one evening, one you can't put down, one which delves at all those tough meanings of existence, one that will read you. And now it's being sold out to big screen special effects, the magical realism of the text morphing into CGI surrealism, the thematic content of the story usurped by the spectacle.  I'm afraid to see it. I don't want my version of the book wrecked to (CGI) pieces! Some books are better left alone, and this one, I fear, is one of them. (Spoiler alert: don't watch the trailer if you ever want to read the book! My gosh, even the freeze-frame below is freaking me out!!! - Not what I pictured at all!!!)

Jack Kerouac's classic novel On the Road is also set to hit cinemas at the end of the year. The question on every fan's lips is: Can such an iconic novel survive the big screen transformation? I don't know. It doesn't look too bad. But will the ecstatic and oftentimes delirious tone of the language come across in the film? Maybe one good thing about a film adaptation in this case is that it will bring the book to a wider audience, a new younger audience. Maybe the film will send people to the book? I certainly hope so. That's all a die-hard fan can hope for I suppose! (A good film being just a bonus...)

The Great Gatsby (which I've been re-reading recently) is another book set for cinematic glory. Baz Luhrmann's dazzling production of Fitzgerald's classic novel has the media buzzing with anticipation. But will it shine a spotlight on the much-loved classic or merely obliterate all the beautiful subtleties with effects and extravagance? Remains to be seen. Gatsby has been converted successfully to the big screen before, most notably the 1974 film starring Robert Redford and Mia Farrow. Infact, many people don't know that The Great Gatsby is a book, so popular was this film version. But it is. And its decadent language can never be portrayed properly in scripted dialogue.


Some books make the transition to film, best qualities intact, but most, don't. The film is a poor man's version of the book. If you want a thorough exploration of the subject - look to the printed word. What we can imagine through its alchemy is so much greater, more vibrant, than what appears on the screen. Because that's what's so great about books - we all have our own wonderful original interpretations of them that are solely ours. But a film is merely someone else's interpretation, that may not come anything near our own. That's why films can never live up to their book sources. A studio's recreation has nothing on our own individual imaginings. 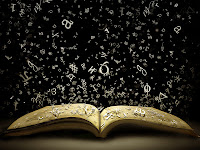 It really kills me though when people watch the movie, don't think much of it, and then totally dismiss the book! But no! - I yell at them - the book is so much more than its flimsy film adaptation!! You have to read it!!! You'll gain so much more insight into the characters and the plot etc etc!  Books have so much more to offer. (Not merely the smug advantage of knowing how the story will end, while fellow movie-watchers bite their nails in anticipation...) You really get to know and understand a character. From the moment you pick up a book, you go on a journey with them. You experience things as they do, in vicarious detail.

Books are all-involving; films are fleeting, they offer a suspension of reality for a mere 2 hours, but books offer so much more. Books offer not a suspension of reality, but an intense immersion in it and then, a transcending of it, an unparalleled understanding of it. Reading is more than a hobby, a pastime, it's an active analysis of life, up close and personal. We absorb stories more keenly through the osmosis of language in a way that we can't with movies. Movies affect and move us sure, but books leave a more long-lasting impression.

There are countless films that have come from books, far too many to mention here. Some have been good, exceptionally good - Gone With the Wind to name but one - and some have been average, and some have been bad. But given everything, I can't say that I'm against books being made into films. On the contrary!  It's a confirmation of their importance. A salute to the written word storytelling. And it keeps books in fashion, which is oh so important in this modern day.

Well now I'm going back to reading Cloud Atlas, which I'm really enjoying (and must say, the trailer looks fantastic!) But still, the joy of having a good book to read, to lose oneself in, can't be equaled by any film adaptation, regardless of its blockbuster status or not.

What about you? What's your least favourite book-to-film adaptation?  Or favourite? Do you love or loathe them? Or what upcoming one are you looking forward?

til the next time,