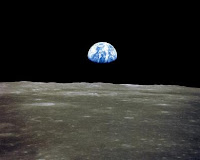 "It suddenly struck me that that tiny pea, pretty and blue, was the Earth. I put up my thumb and shut one eye, and my thumb blotted out the planet Earth. I didn't feel like a giant. I felt very, very small." ~  Neil Armstrong

All talk of the moon landing this week has brought up the idea of perspective for me.

It's a big world we live in, a big, vast, mysterious, marvellous universe. But then, when we lose sight of this, life becomes so small.

Life must be composed of big matter and small. The mystery and the mundane. But - from what I can see - most people are only concerned with the small. Well, lots of people. The mechanical necessities of existing: food, money, jobs, work, routine, societal status are their ruling concerns. Looking down all the time, they miss all the greatness and illumination of what it's really about.

Seems no one blinks an eye at a star anymore. No one stops to notice the moon. Or give impetus to dreams. Life spinning by us. Life composed of material matter, no mention of the stardust from whence we came.

Such an existence is not a life, it's just existing. Too much focus on the small things in life leads to mediocrity. Until everything loses its meaning. How empty everything would be then. How all the 'big' talk about life would become irrelevant, relegated to the background, to a bracketed by the way trivial footnote.

But, 'life I think is no parenthesis' - ee cummings. All these other things are.

It's hard for an idealist to survive in such a harsh realist world at times. Everywhere I look at the moment, miniscule mediocrity, making small of what's really big. Things all skewed out of balance. Someone once said that mediocrity was death to a poet. Of course it is. Because poetry is the complete opposite of mediocrity and meaningless. Not to rant, but sometimes it just sucks when everywhere you turn, you're faced with a big blank wasteland when there's a myriad of starry skies above.

And then reading about Neil Armstrong this week - how it seemed his one great achievement was subsequently eclipsed by the lack of space exploration in the preceding years of the moon landing - has added to my sense of disillusion on the big/small front.  How the amazing feat of stepping on the moon was soon forgotton and faded into the background of materialism and war and a world preoccupied with other more pressing practical agendas.  And how hard that must have been for him. A veritable Icarus of the modern age.

So I guess I'm just wondering how do we surpass it? This alienating insignificance that seems the modern creed. We artists, who feel everything so keenly, including the absence of feeling?

From an early age Armstrong was a pilot first and foremost. He learned to fly a plane before he could drive a car and is quoted as saying, 'pilots take no special joy in walking. Pilots like flying.' And fly they will I suppose, against all the odds. A good maxim which could be applied to every idealist and dreamer.

And now I'm thinking of a quote by ee cummings.  An illustration of this sense of idealism and enthusiasm and curiosity for what life's really about, an inclination to stars. As he says stage right: there's a hell of a good universe next door, let's go!

Let's. Of course I know this. Armstrong knew this, quite literally. Lots of people know this. Lots don't seem to. Or act like they don't. If only they would. If only. Maybe then we'd see life in perspective - appreciate what it is really, first and foremost and finally, ultimately: a brazen and brilliant gift. 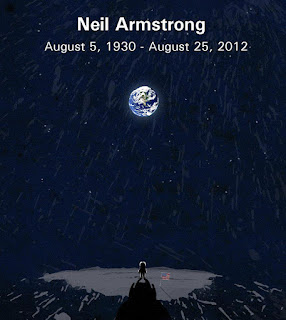 The Many Consequences of Moonwalking

Afterwards, I wonder
were his days
blank and ill-footed, each choreographed
careful step
nothing to compare with
that one giant leap.

And in the desolate
barren wasteland
of a material, alien world, no space
for heroes, how he could fly
when everywhere, gravity
was getting heavier.

When the pace of exploration
and enthusiasm slowed
to a stall.
When eagles’ wings were clipped
and laid carelessly
to rest.

And in his inner landscape
I wonder, was there
tranquility? Or just
craters of doubt
and despair
that could never be filled up.

He must have lived
until the star-scape became a scar,
until the perspective of the green and blue
perfect pea
was thumbed away
by lack of intent.

In a land of small men, he loomed
like a giant.
A satellite circling all lapse
of dreaming, an exclamation point
to the question mark of impossibility –
braving infinity.