April is the Loveliest Month

Are you enjoying April so far? 'April is the cruellest month...' TS Eliot once said. But I disagree! I happen to think it's the loveliest. And I'm not alone in this opinion either.

April is quite the beloved month in literature. So many writers have declared their fondness for it throughout the years, from Shakespeare to EE Cummings (*see quotes below.) Just google it and see the plethora of material that comes up. No other month is quite as written about, or, as lovingly written about, as April. Its mention in verse appears as a warm rosy glow, a love-light, a fresh hope, a promise, a horizon, a time of abundance and growth.

April is a muse for songwriters too. 'April in Paris' anyone? Or how about some 'April Love'? Queen's 'April Lady'? Or Simon and Garfunkel's 'April Come She Will'? Maybe it's because April is the first sign of spring in the year, 'well-apparel'd April', the first real benevolent month, an anticipated and welcome respite after winter's weary wreckage, the first time we start to feel love again for the outdoors, that makes it such a potent symbol and metaphor for the heart's new season. 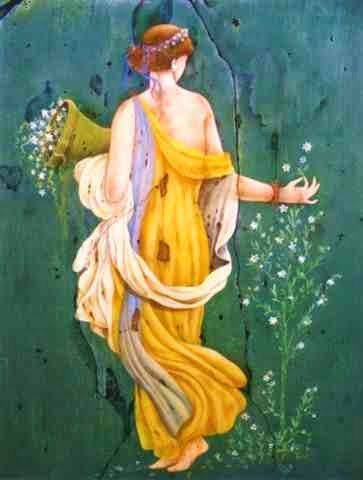 April's popularity is also evident in it being a popular girl's name, what with all those instant connotations of spring.  The month takes its name from the Latin verb 'aperire' which means 'to open', as in bud, from all the budding and blooming that was happening at this time of year.  Originally April was the second month of the year in the Roman calender and named also after the goddess of love, Aphrodite, (Aprillis in ancient Rome). No wonder it has such a nice ring to it. April is often personified in literature as a goddess coming over the hill strewing flowers, as John Masefield put it: 'I have seen the Lady April bringing the daffodils, bringing the springing grass and the soft warm April rain.'

Even the very sound of the word 'April' is lovely I think.  Ap-ril.  As I noted recently in a poem I wrote, it sounds a bit like something being peeled - a fruit like a peach or an apple, a coat, an item of winter clothes - don't you think? A peeling off of the old and revealing of something new! April. Something shiny. Reminds me of the French word 'brille' (pronounced 'bree') for 'shining', as in the sun is shining ~ 'le soleil est brille.' It has that sense of light breaking through, the first dawn of the year. It conjures up all kinds of yellow and apricot hues.  April. An echoing sound like the bell of the new ringing. It is definitely the most pleasant sounding of all the months, a prelude to a smile on your lips as you say it. (Try it :) 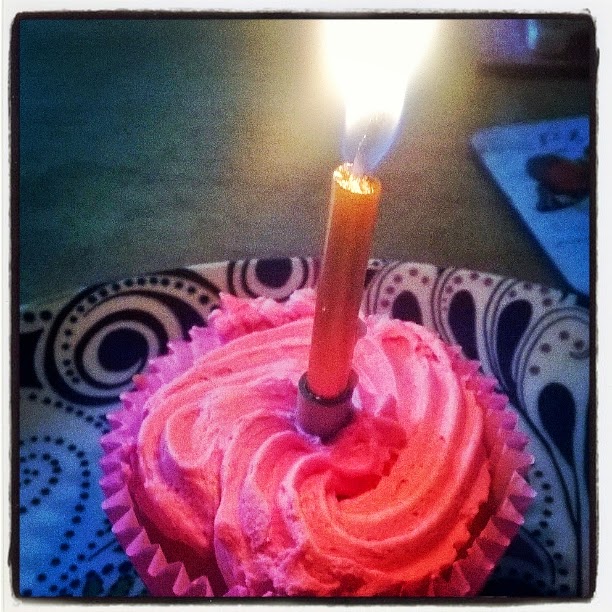 I love April. It's my favourite month, hands down. I love everything about it not least of all because it's my birthday in April and everyone feels a special affinity for their birth month, do they not? (Infact, a lot of birthdays of friends & family too.) It's the month I feel most at home in, the month I look forward to all year, the month in which I seem to get to be more me, if that makes sense. A decadent pink  blush of a month when everything turns sweeter than before.  The (pink) icing on the cake of the year.

It heralds a new beginning, not only astrologically, but seasonally too. You can't help but feel that everything is coming into bloom especially for you! There's no better time to have a birthday, when the 'greening of the earth' begins.  This feeling is heightened of course, by the fact that Easter is almost always in April with all its associations of rebirth and renewal. Delightfully, April is also the month when the first butterflies appear, little red and orange phoenixes, fluttering anew after their winter hibernation or caterpillar incarnation.  It is a time of new beginnings, not just on a personal front, but on an all-encompassing wider one. As ee cummings has noted the air is 'immortal with the fragrance of begin'. 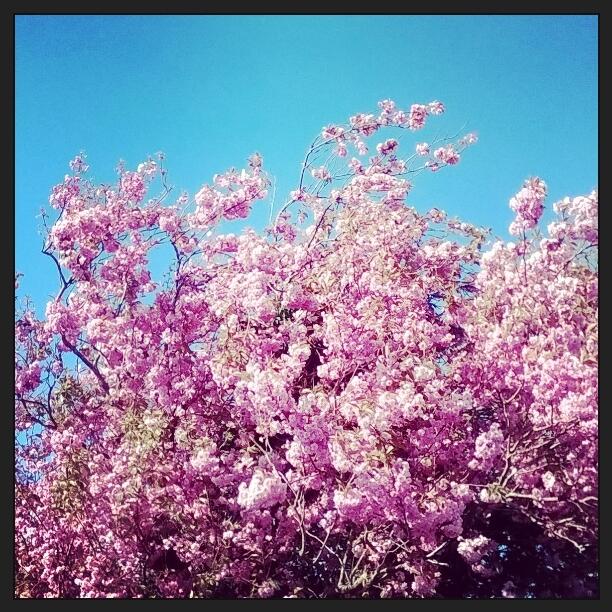 April is the month when spring starts to really take hold, when skies get bluer, days get longer and everything begins to bud and blossom rapidly. What Rilke spoke of here: 'Everything is blooming most recklessly; if it were voices instead of colours, there would be an unbelievable shrieking into the heart of the night.' And most beautiful of all these blooms has to be the cherry blossom trees. April is the month when they come into bloom, pink bunched blossoms hanging against a canvas of blue sky, like cheerleaders of the month. Everywhere you go, there they are, waving their pink blushing cheery blooms. They always seem to me like a heart in full bloom, utterly uplifting, filled to bursting point with love of life, blooming unabashedly and brazenly for the time they have. Perfect mascots of the month.

Staying with the 'pink' vibe, April is the only month with a 'pink moon' - the name given to its full moon. It's not pink, of course (although this year we did have a red 'blood' moon for a while with the eclipse). It takes its name from the pink phlox that begins to appear at this time of year and I should think all the other pink blossoms too - namely camellias, cheery blossoms and tulips. 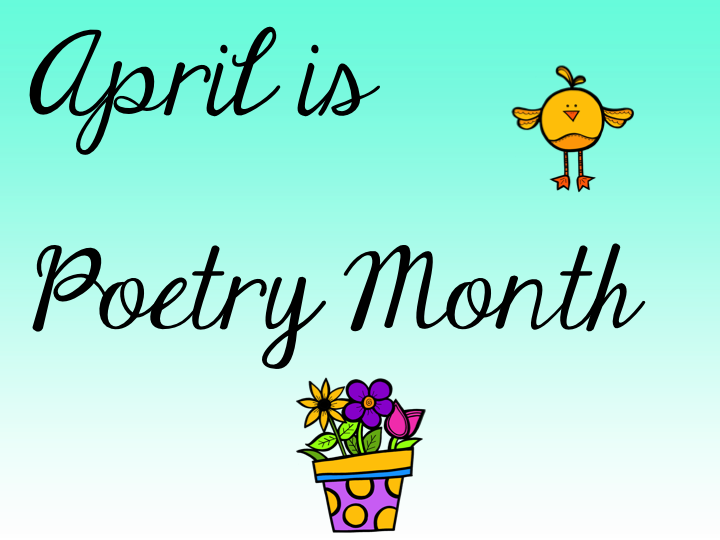 Another reason I love April is the fact that it's National Poetry Month and as such the NaPoWriMo challenge of 30 poems in 30 days. (See previous post.) What could be more pleasant than to have every day filled with poetry? (Sigh) And why was April chosen for this honour I wonder? Is it because of its strong poetry heritage? Or as it's the first month of the year when spirits are high? The perfect time for binge-writing after the dreariness of winter and before the busyness of summer? When poetic inspiration bursts forth into bloom with all the trees and flowers? And poems are like little chicks newly hatched making their way into the world...? Maybe. 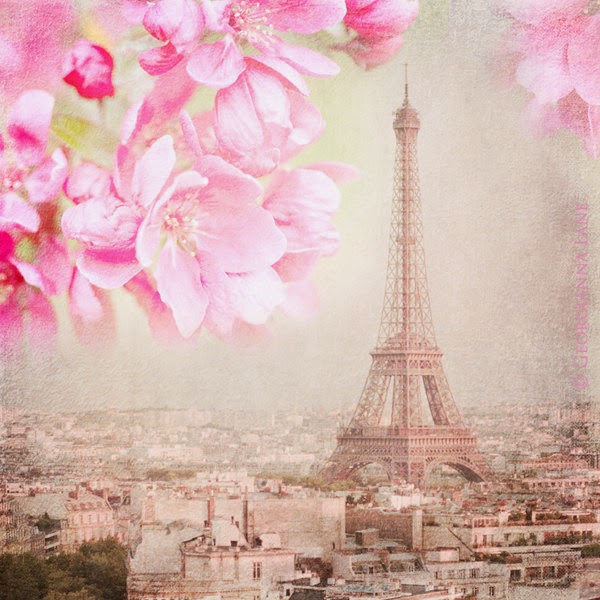 Another reason I adore this month is that it puts me in mind of Paris.  Paris. The two are intrinsically linked. (Have you noticed that April's 'A' shares the same shape as the Eiffel Tower?) April is the best time to visit the city (like the song and the film and all the guidebooks ever written say!) Paris and April go together well, like Lapland and Christmas, tropical islands and summer... peaches and cream, or two exquisitely matched lovers strolling hand-in-hand beneath the horse-chestnut trees lining the parks now at their most inviting. The city is at its most famously beautiful in April with the cherry blossoms and geraniums in bloom everywhere, the sun bringing life to the leafy boulevards, romanticising evenings and providing the perfect setting for café-sitting, wine-drinking and people-watching. All those writers who were in love with Paris sang its praises in the spring: Hemingway talked of how in the spring, 'there were no problems except where to be happiest' and Henry Miller, 'when spring comes to Paris the humblest mortal alive must feel that he dwells in paradise.'  Every year April is when my Paris-making-plans start - I peruse the guidebooks, order yet more books and re-read Hemingway's 'A Moveable Feast' as well as all the other Paris books I have - in keeping with the old adage that 'April is a promise that May is bound to keep.' Here's hoping. April is such a happy, pretty, cheery month, 'when every happy growing thing laughs like a babe just roused from sleep.' It is a powerful month too, its green an enduring hope against death, as Wallace Steven demonstrates in his poem 'Sunday Morning' (quote below.) I hope you are enjoying it is much as I am! So far the month has been filled with sunshine and smiles. The weather so far has been glorious  and for Ireland that's quite a spectacular feat!

I'll leave you with some examples of the lovely sentiments I've come across on April. Most of these lines come from poems (some of which I have in full version here: A Poem a Day) all echoing the same feelings: enthusiasm, energy, optimism, wonder, awe, rebirth, rejuvenation, mirth, magic even. Read them and feel the glee!

'Every tear is answered by a blossom/ Every high with songs and laughter blent/ Apple-blossoms upon the breezes toss them/ April knows her own and is content.'
~ Susan Coolidge 'April'

'It's april (yes, april my darling, it's spring!) it's spring!'
'Love is a deeper season than reason my sweet one (and april's where we're)'
~ ee cummings 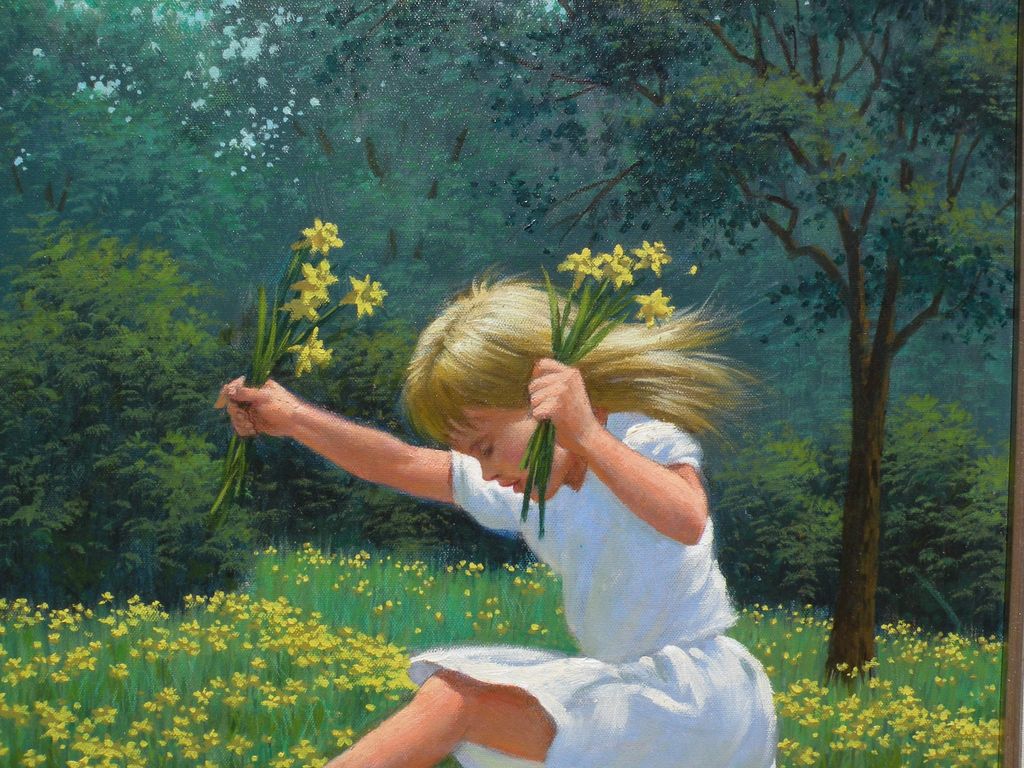 'April hath put a spirit of youth in everything.'
~ Shakespeare

'Winter’s done, and April’s in the skies.
Earth, look up with laughter in your eyes!'
~ Charles GD Roberts 'April Adoration'

'Sweet April, many a thought is wedded unto thee, as hearts are wed.'
~ Henry Wadsworth Longfellow

'Paris; this april sunset completely utters.' ~ ee cummings
'Yet with these April sunsets, that somehow recall
My buried life, and Paris in the spring,
I feel immeasurably at peace, and find the world
To be wonderful and youthful after all.'
~ TS Eliot 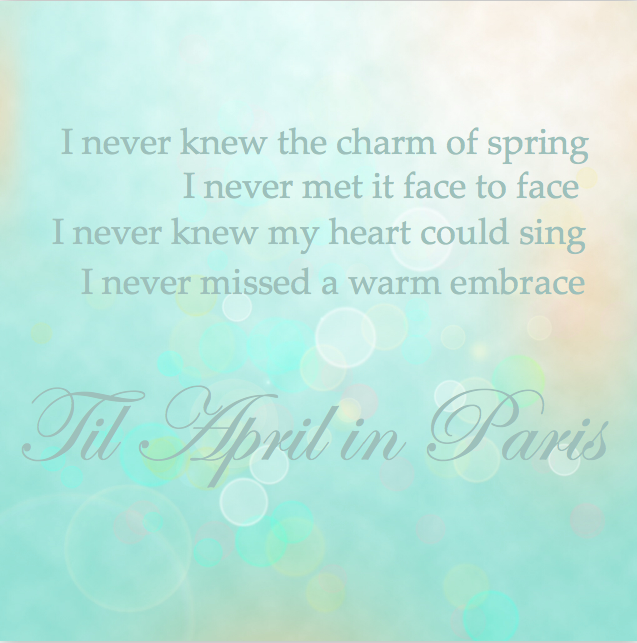 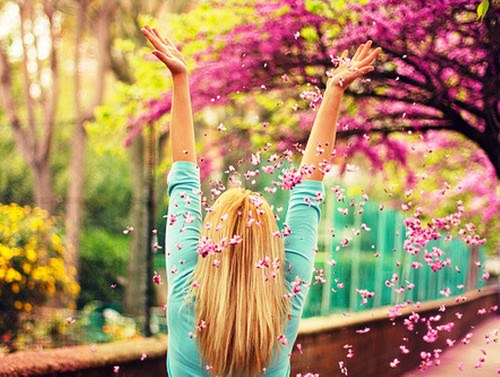 'Make me over Mother April... when thy flowery hand... and great heart beats and quivers to revive the days that were.'
~ Richard Hovey 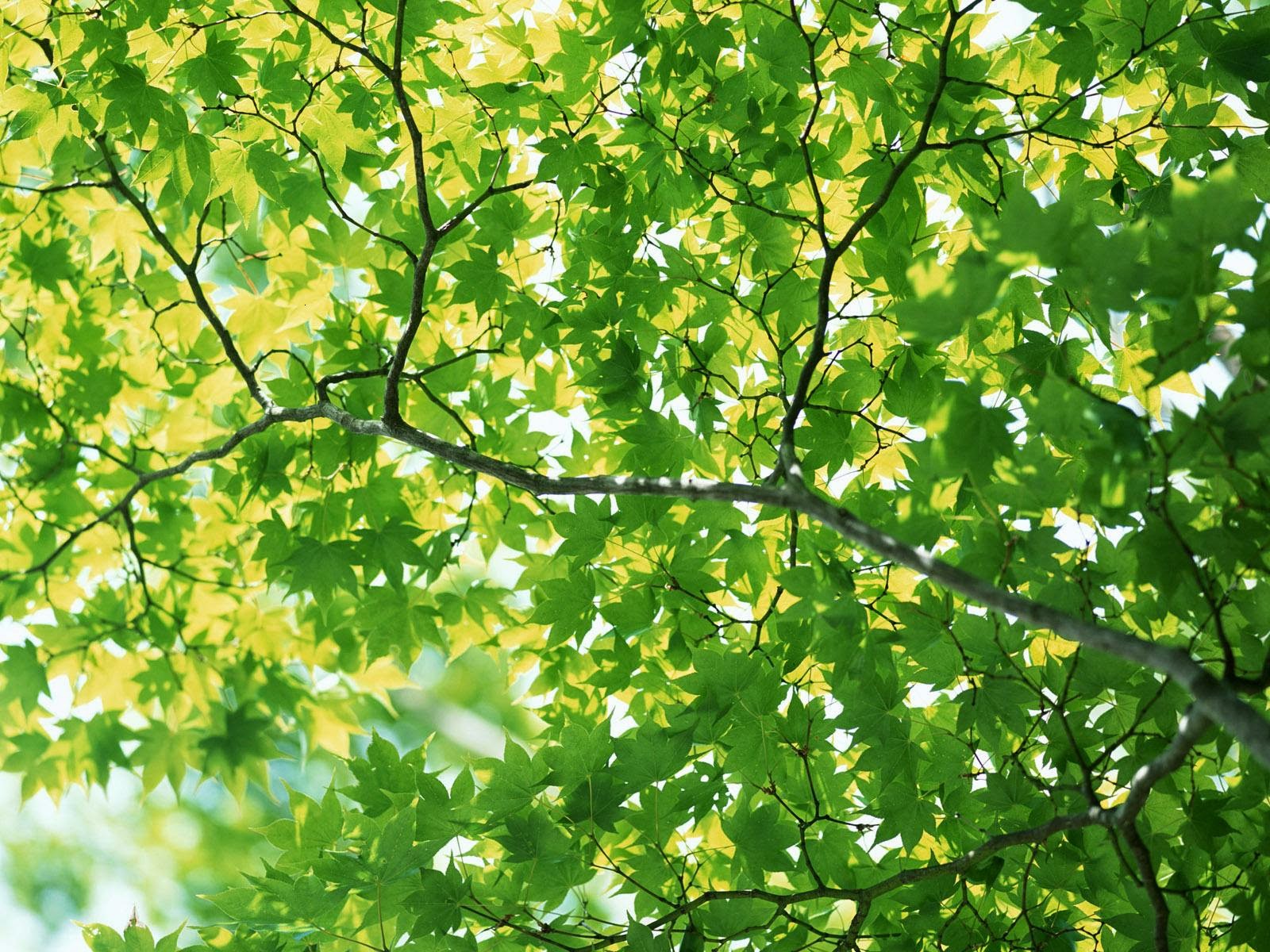 'There is not any haunt of prophecy,
Nor any old chimera of the grave,
Neither the golden underground, nor isle
Melodious, where spirits gat them home,
Nor visionary south, nor cloudy palm
Remote on heaven's hill, that has endured
As April's green endures;'
~ Wallace Stevens 'Sunday Morning'

Praise the spells and bless the charms,
I found April in my arms.
April golden, April cloudy,
Gracious, cruel, tender, rowdy;
April soft in flowered languor,
April cold with sudden anger,
Ever changing, ever true -
I love April, I love you.