An Ode to On The Road 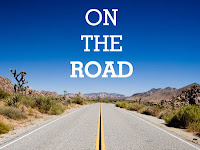 'There was nowhere to go but everywhere, so just keep on rolling under the stars' ~
Jack Kerouac, On the Road

It's Jack Kerouac's birthday today and as such, I am penning an ode of sorts to him and his legendary novel, 'On the Road.'

I'm sure everyone's heard of Jack Kerouac. But not everyone it seems has heard of The Beats, the literary movement he was a part of.  The Beat Generation was the name given to the literary/cultural movement that arose in America in the 1950s, partly an underground and subculture movement, a reaction to the conservatism of the times. Based mainly in San Francisco, it celebrated non-conformity and spontaneous creative expression, which bred a whole new school of young bohemian-like writers, dabbling in both literary experimentation and drug use to achieve a new authentic and exciting form of art.

It was pretty far-out to put it simply. The movement was a rebellious one, attacking social conventions, materialism and traditionalist literary structures. The most famous Beats works of the time were Allen Ginsberg's prose poem 'Howl', a rebuke to bourgeois society and the havoc it was wrecking on its young: 'I saw the best minds  of my generation destroyed by madness, starving hysterical naked...' (you can hear Ginsberg read it here) and Jack Kerouac's ground-breaking road-trip novel 'On the Road.'  Howl was revolutionary in tone and outlined the Beat manifesto, while Kerouac's novel was an experiment in prose that adhered to the creative expression of the movement: spontaneous, confessional, emotional, dramatic, transcendental.

Why On the Road is still so loved today is no mystery. It's theme really is freedom - the freedom that comes with hitting the highway and seeing where it takes you, both literally and metaphorically. The journey or 'quest', which was so central to many American novels before (Huckleberry Finn most notably) was interpreted to new heights in Kerouac's novel. It chronicled a journey to one's inner self, to the blatant beauty that was at the core of the world, until a harmonious intermingling of the individual, the self, with the communal and the  world occured.

It's earned a repuatation as being a 'cool' book, maybe the coolest book ever written. Why? Well it features sex, drink, drugs and youth letting loose, rebellious youth at that, liberated, passionate and high on life. It defined its new generation - a generation of young hipsters, dabbling in drink and drugs and go-getting as a way of transcending the humdrum of routine lives, individual free spirits searching for that elusive something that would give definition and meaning to life, the essence of life itself, the actual living of it and finding kindred spirits who felt the same, as the narrator realises early on: ''because the only people that interest me are the mad ones, the ones who are mad to live, mad to talk, desirous of everything at the same time, the ones that never yearn or saay a commonplace thing...but burn, burn, burn like roman candles across the night", an accurate description of  Kerouac and The Beats themselves.

The novel details a quest for self: 'the road must eventually lead to the whole world' which Kerouac's friend John Clellon Holmes has commented upon, saying that the characters of the book were 'on a quest, and that the specific object of their quest was spiritual. Though they rushed back and forth across the country on the slightest pretext, gatehring kicks along the way, their real journey was inward; and if they seemed to trespass most boundaries, legal and moral, it was only in the hope of finding a belief on the other side.'

Going 'on the road' in the novel is to lose one's sense of self, to leave the self open to discovery on the wild plains of the country, but also to immerse the individual self with America, with what America was, at ground level, to absorb it into your being:  "I woke up as the sun was reddening; and that was the one distinct time in my life, the strangest moment of all, when I didn't know who I was - I was far away from home, haunted and tired with travel, in a cheap hotel room I'd never seen, hearing the hiss of steam outside, and the creak of the old wood of the hotel, and footsteps upstairs, and all the sad sounds, and I looked at the cracked high ceiling and really didn't know who I was for about fifteen strange seconds. I wasn't scared; I was just somebody else, some stranger, and my whole life was a haunted life, the life of a ghost.” Being on the road is about discovery, self-discovery, as well as the revelatory discovery of the world.

What is so remarkable about the novel is not even its theme, but its style of writing. On the Road is written  in 'spontaneous prose' - so spontaneous that Kerouac wrote it almost all in one go, on one piece of unbroken typescript (which can be viewed in a museum today - right.) The writing was what Kerouac himself termed 'kickwriting' (and what could rightly describe the rest of the Beats' work) - 'write only what kicks you and what keeps you overtime awake from sheer mad joy.'  He said of his style in On the Road - 'Wild form's the only form holds what I have to say - my mind is exploding to say something about every image and every memory...I have an irrational lust to set down everything I know.' This became Kerouac's signature style (of which you can read more in his rules for writing below).


This free-association style is what gives the book its unique energy, verve and coolness. The Beats style in general was heavily influenced very much from the burgeoning jazz scene at the time, with their free-flowing and improvisational wordplay and sense of rhythm and lyricism. Kerouac's prose reads like an energetic fuelled stream-of-consciousness, a hallucinatory monologue in some parts, a spiritual manifesto in others, but always, in a language that is as frenetic as its subject-matter, as honest and confessional as its narrator and as vivid and energetic as what it is expressing. Here's an example of an epiphany moment described in language that is breathless and euphoric, rhythmic and spontaneous: 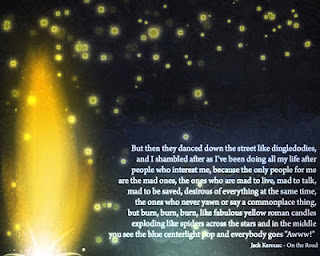 "And for just a moment I had reached the point of ecstasy that I always wanted to reach, which was the complete step across chronological time into timeless shadows, and wonderment in the bleakness of the mortal realm, and the sensation of death kicking at my heels to move on, with a phantom dogging its own heels, and myself hurrying to a plank where all the angels dove off and flew into the holy void of uncreated emptiness, the potent and inconceivable radiancies shining in bright Mind Essence, innumerable lotuslands falling open in the magic mothswarm of heaven.
I could hear an indescribable seething roar which wasn't in my ear but everywhere and had nothing to do with sounds. I realized that I had died and been reborn numberless times but just didn't remember especially because the transitions from life to death and back to life are so ghostly easy, a magical action for naught, like falling asleep and waking up again a million times, the utter casualness and deep ignorance of it. I realized it was only because of the stability of the intrinsic Mind that these ripples of birth and death took place, like the action of the wind on a sheet of pure, serene, mirror-like water. I felt sweet, swinging bliss, like a big shot of heroin in the mainline vein; like a gulp of wine late in the afternoon and it makes you shudder; my feet tingled. I thought I was going to die the very next moment. But I didn't die...”

Some think of On the Road as semi-autiobiographical, but it wasn't. The characters are fictional, a reflection of Kerouac's own feelings more than people - Sal Paradise is his main self and Dean Moriarty, his more rash alter-ego, the liberated passionate self he would like to be.  In the inroduction to the Penguin Classics edition, Ann Charters notes that what Henry James once said about Harriet Beecher Stowe's novel 'Uncle Tom's Cabin', could also be applied to On the Road: that the novel was 'much less a book than a state of vision, a feeling of consciousness'. Which perhaps explains its supreme place in the canon of literature as well as in people's minds and hearts. It has feeling, rather than plot; vision rather than theme; is an arresting amalgamation of heart, gut and mind.

I love On the Road for all these reasons. There is an energy and vibrancy and 'vibe' in its prose that can't be equalled in any other novels.  And it's just brimming over with a sense of urgency and freedom and lust for life! Real and raw and ready: a few free-spirits, hitting the road, seeking, searching, not knowing what life is, what life they want, except to feel things, to experience things, to  live it up while they can, to feel freedom as the wind blowing on their faces, the engine revving, en route to destinations unknown, or the stars hanging above them at night, an invitation, a lullaby, a blessing. It buzzes along, brims, sings, shouts and stings, brazen and wild, reflective, exhilarating and mystical. Novels are supposed to offer a view into life, but this one offers more than that - not just a view, but a visceral immersing in it.  Reading it is like an adrenaline shot to the soul.

Basically, if you haven't yet read On the Road - read it! See (and more so - feel) why it has become such a classic. Below are Jack Kerouac's pretty-out-there rules for writing, from Belief and Technique for Modern Prose which outlines his own core concepts on the writing process.  These are maybe the best rules ever written on writing, most definitely the most exciting and expressive anyway. I especially like #28  - 'the crazier the better'! Yeah, now we're talking. 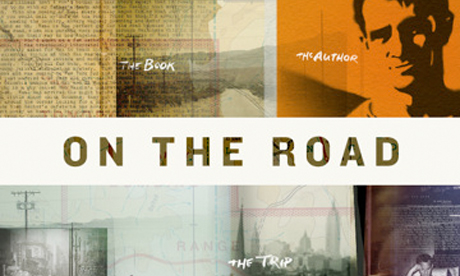