The Occupational Hazards of Being a Writer...

So I was thinking about writing and writers and the 'writerly' self and all the many wholesome advantages it has bestowed on me, but also its shadowed side, the negative repurcussions of being a writer, the occupational hazards if you will.

A writer's work has been defined as 'paying attention to the world' but sometimes paying attention to the world gets too much. Frankly, it can be dizzying at times. Trying to take in everything sometimes feels like you'd need ten eyes and a central processing unit instead of a brain. And it gets exasperating when you can't take account of everything. It causes sleeplessness, hyper and heightened sensitivity and an inability to concentrate on any one thing at a time.

One of the major occupational hazards of being a writer is that you read into things, in a really overblown way. I studied literature for my college degree and a recurring side-effect of learning to critically analyse texts is that I read into absolutely everything written now. We were taught how to interpret texts intimately, how to decode and deconstruct every sentence, every word, to see what's really going on beneath, theme-wise and meaning-wise and the handy skill of reading between the lines. Now I can't help but employ this skill in every written word context:  text messages, online messages, letters, notes, greeting cards. I read so much into what people write - how they phrase things, what vocabulary they use, line-breaks, structure, punctuation - it all says so much, whether they're conscious of it or not. I dissect any written document like a forensic scientist, looking for clues of personality (of which there are many), and also other things like what is not being said and what really wants to be said! (Yep, it's THAT revealing!)

I read an article recently on something similar - forensic linguistics to be exact. Which basically is the term for analysis of language and the written word being used as evidence in law convictions (You can read more about it here: Solving Crimes with Linguistics) There have been cases which were decided on the linguistic evidence presented - analysis and comparison of notes and emails proved ample evidence to link the accused with the crime. See, the way you write is so specific and unique, it can be used as an effective individual identification.

Another side-effect of this 'critical analysis syndrome' is you become particulary sensitive to grammar - more precisely - grammar mistakes. You morph into a Grammar Nazi, consistently on the watch for misuses of there, their and they're, too, two and to, your and you're, and worst of all, superfluous apostrophe use! I just can't stand it when I encounter bad grammar, especially in public places, like shop signs. Somehow I equate perfect grammar with a well-oiled, harmonious, functioning fluctuating universe; bad grammar just upsets the whole balance and throws everything off-kilter.

As a writer, I love words. I am, head-over-heels in love with words. Therefore I am wordy at times. Vaingloriously verbose. And when it comes to arguments, believe you me, verbose is a trait that you don't want to have! We writers are also prone to over-writing anything written - from birthday cards to text messages, grocery lists, post-its, business letters, the comments section in questionnaires, and even, I've been held accountable - social network statuses. Anywhere the written word is concerned - domestically, functionary or mandatory - you can be assured a writer will leave their verbal fingerprint (we quite rightly rejoice in this I might add).

Curiousity is a trait specific to being a writer. Apparently, we are notoriously so. Look - there's even a book/writing manual on it! (right). But curiousity can get you into  a lot of trouble - just look at crime writers and journalists. Those more lay writers of us just get termed 'nosey' by other people, whom we are frequently observing at close quarters, almost with the same keeness and intense awe as those nature documentary makers that stalk out and film wild animals. (One of the first exercises you do in writing workshops is called 'The KGB exercise' - write up a close observation of people and place).

Another hazard for writers is routine interference. It's been proven that writers do their best work either early in the morning or late at night. I'm the latter. My default work setting is now late pm. Early mornings I'm afraid are out for me. Lots of late night writing binges have meant that my mind has been programmed to perform better in the wee small hours. It's only then it becomes alive brimming and fizzing over with ideas. The result of which can mean lots of wasted, unproductive days and  sleepless nights.

Procrastination is a serious occupational hazard of writing. Due to the nature of the writing process - random, weird, and generally undefinable - procrastination develops in and around writing bouts. It's a veiled fear in a way, inverted adrenaline, a sort of coping mechanism, but it is real nevertheless. It's also a perilous pitfall. Handicapping. Paralysing. And can succeed in killing your writing career if it's left to develop ceaselesly, like an aggressive fungus growth. 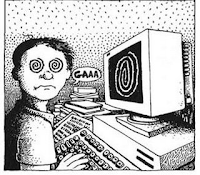 Physical hazards in writing are limited but include: stiff limbs, poor circulation and backache (exercise deprivation as sitting at a desk to write usually requires staying at a desk, no breaks, no leg stretches ). Another is that I always end up with pen ink all over my clothes. Even though I can't seem to keep a pen with me to save my life, I still manage to have ink scrawls everywhere - jeans, hands, even face (an embarassing result of frenzied inspired scribbling.) Bitten nails are also a side-effect of the profession, as is eye-strain, with glasses a necessity for most writers at some stage. Not to mention a predisposition to drinking copious amounts of coffee and if we're of the Hemingway school of writers - hard liquor.

I can't read books solely for pleasure anymore. I read them as a writer, actively not passively, poring over sentence constructions and dissecting well-chosen words. I read and re-read; I can't just read in a continuous manner, moving along at a fast pace, I keep stopping and starting, marvelling at the language, even noting some phrases down, so I'm a ponderously slow reader (my friend pointed this out to me circa 10 years old, when she noticed she'd have a whole chapter read in the time it took me to read two pages - I just couldn't move on until I'd absorbed everything they had to offer.) 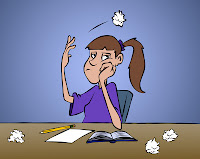 Environmentally speaking, we writers, on average, waste a lot of paper. All those countless atrocious attempts and aimless doodles pages (not to mention dumped manuscripts) that are  scrunched up and thrown in the bin before we even begin the real writing. We go through not just a lot of paper, but a lot of ink. Even though most submissions nowadays are online, we do like extra hard copies of our work to be somewhere within reach just to remind ourselves that we have produced something substantial after all.

Writing can turn you anti-social from time to time. Like it's hard to keep up a conversation while your mind keeps wandering to that half-written story in your head. You nod along vaguely but really, you've left your body. There has to be a name for this, this type of 'ghost' writing. You never stop being a writer, you don't leave the job behind at your desk - you are writing in your mind non-stop 24/7.

Another unfortunate consequence of being a writer is that you tend to make up things in real life as well as just on the page. Oh yep. This one can land you in a lot of trouble. Daily life becomes a sort of blank page awaiting your scribbles. You start to tell yourself stories from day-to-day happenings, everything becomes plot-driven and people take on the roles of stock characters. Also, you start to project characters onto real-life people. You turn real-life people into characters and sometimes, you start to believe the fictional version rather then the real one. You makes muses of people and start fictionalising them until they become myths, half-human, half-god (not good this, believe me I know #I'm a Poet) 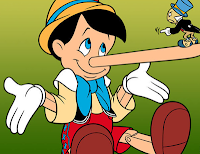 You're prone to fictionalising, full stop. You make things up, tell white lies, embellish - ah, yes that's the word - you're prone to embellishment: making things sound more exciting than they actually are. Boring subject-matter wouldn't cut it in a book and same in real life - so you harness your embellishing skills and set to embellishing - that is, adding an event here, a description there, a juicy bit of dialogue there until you yourself become the unreliable narrator of your own life.

But the worst occupational hazard has to be the backlash you will invariably receive when published. Lawsuits are not uncommon. And we writers are generally an opinionated bunch, and as scribes of the written word, we tend to you know - write these opinions down - therefore immortalising them forever in hardcore evidence. Which can lead to a lot of disgruntlement on our audience's behalf. But hey, we live our lives on the parapet, writing is expression and expression is truth, and truth will always get you into some kind of trouble. 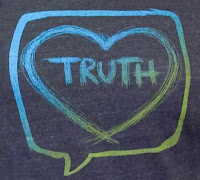 On the same note, writing can make you more outspoken. Writing, unlike speaking, insists that you put down only what is true (like a filter), and when you do it often enough, for long enough, happily enough, it kind of transposes into your speech medium too - until vóila -you start to speak the truth. And boy, do things get complicated then...

So you see, there's a lot of occupational hazards attached to writing. Here are just some. What about you? Are you afflicted with the same ones I am? Or do other  more grotesque ones haunt you dear writers? It's a dangerous game writing, but to give it up would be to live in a world of far worse afflictions.