Rules on Writing - Bending & Breaking Them!

Gosh, all the writing sites and Tweets and Facebook pages I've signed up to, they seem to like nothing more than to post endless lists on 'Rules for Writing.' Sometimes from famous authors, sometimes more obscure ones, and sometimes it seems, just off the top of their heads. Which basically makes me want to scream out in frustration!!!!

Because there are no real rules to writing. Advice on writing, sure, give me loads of that! (And the best advice is: Write!) But these so-called rules? - Pah!!! Writing is about breaking the rules is it not? It's about expressing your own unique take on the world in language, and to do that, to be original, you have to break some rules.

Like take this list of rules for example. I've never seen anything more limiting (even though it's trying to be funny/smart...)
I break every damn one of these 'rules' when I write (parenthetical remarks are always necessary I say!) And avoid alliteration? Never! Oh the audacity of that! Never end a sentence with a preposition? As if! Eliminate sentence fragments? No! It reminds me of my grammar textbook at school (and what writer didn't ever tweak grammar rules to suit their needs?)

My first rule-breaking was starting sentences beginning with 'and' and 'but.' Why ever not I thought? If used in the right way, these two conjunctions can be pretty darn powerful: and can be used as a defeatist sigh to a sentence; but as an irrevocable blunt declaration. I remember being penalised on a school essay I wrote circa 12 years of age for too much punctuation. Pah! So what if I used a semi-colon here or there?! I'm sure the piece made more sense than those limbo essays without any punctuation to tether them down, not even a full stop!
Another 'rule' that's been around the block a few times is to always use 'said' to carry dialogue, and never another speech marker. What about all those other words in the English language that signify dialogue - what's wrong with them? For example, what  about 'asked'? Because 'asked' is a world away from 'said'. Or even 'demanded'? Or  'declared' or 'drawled'? (Btw, drawl is good - can tell you a lot about a character)  All these words laying unused at the bottom of a writer's tool kit and said smacked everywhere? No thanks!

Other inane rules include to never use the word 'suddenly'. Apparently because it's a lazy word. But what if you make it do its work, tone it up, a few push-ups and pumps, pages of holding back and then - suddenly (aha) -  it appears and looks all brand new and shiny. Is that not ok?

These 'rules' that say 'don't do this' and 'never use this' really piss me off. Maybe it's the rebel in me - but when someone tells me not to do something, it just makes me really want to do it all the more! I especially hate the 'rule' to never have a sentence over 4 lines long or alternatively, a one-word sentence. But my gosh, haven't these rule-makers seen what an one-word sentence can do? Raymond Carver said that a full stop placed at the right place could 'pierce the heart.' Well one-word senteces are the bayonets that do the piercing. They are what a suspenseful score is to an exciting scene.

Whatever would those stuffy rule-makers say to Colum Mc Cann's novel 'Let the Great World Spin' when they come across the stream-of-consciousness sentence that goes on for a full paragraph - half a page in length - detailing all the various ways people die? A sentence that stuns us and forces us to look at death in an unflinching manner. A truly breath-taking tour-de-force of a sentence that puts everything in perspective. A sentence in which theme and style sync so harmoniously together as to cause a powerful reaction in the reader.

And that rule about not using too much dialogue - tell that to Hemingway whose story 'Hills Like White Elephants' is nothing but dialogue and all the better for it as it forces us to read between-the-lines. (And not to forget - has become a staple in classic short stories).

Of course, this is not new in literature. James Joyce was the master of stream-of-consciousness, Ulysses being a supreme example of a novel that broke the rules and set new precedents for experimentation in form in literature for decades to come.

Which brings me to the excellent writer Jonathan Safron Foer who pushes the boundaries to the extreme. His post-9/11 novel Extremely Loud & Incredibly Close is full of radical deviations from conventional novel writing. It's not just language that Foer plays with, twisting and moulding it to suit his theme and every nuanced emotion of what he is writing, but everything else too, including form, structure and layout. 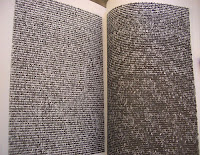 Each of his characters who narrate the novel have not only different voices, but different typeface templates too that relate to their character. Foer even manipulates the typeface in one chapter, making the print so tight and dense and squeezed together until it becomes a black blur, so as to highlight his character's emotional turmoil; he inserts doodles into another chapter and other pictures appear randomly throughout the book enhancing what the words say. In one startling and moving chapter, the type is marred by red-pen marks, the circling of 'grammar mistakes' that a character has circled on an array of letters from his father. The effect is shocking, given that the narrative is of the bombing of Dresden in WWII and the description of its harrowing aftermath, made all the more real and immediate and horrific with this red ink all over the pages like blood. The whole novel is  indeed 'extremely loud and incredibly close', the author's innovative stylistics making it cut to the core.

Foer is just one of the radical new writers that are pushing the boundaries of language. It may be classed as postmodern, but I prefer to think of it as 'exciting.' It's just one example of what can be done with language if we are brave enough to play around with it. Creativity is, after, all defined as 'intelligence having fun', so why not have fun with writing?

Why all these limiting rules? Let the only rule of writing be: write whatever way you want! Heed only your gut and not these gutless rules thought up by some disgruntled ego-centric grammarian! Yep, that's about it. Forget all this malarkey about grammar. Fuggghedaboutit! Make up words, use slang and parentheses and one-word sentences! I know too many beginner writers who quiver in fear at the thought of these so-called ''rules.' And spend the whole duration of writing groups worrying about their grammar and spelling like it's the be-all and end-all of writing. It's not grammar-school you sign up for when you commit to writing! That's only a technicality. Worry about the big stuff - like themes - rather than the mechanics I say!

These crazy grammar rules make for boring writers. Stifling and tedious and trivial. Everytime I come across them, I feel a bout of brain-sleep coming on. Really? What sort of boring writer went to the trouble of writing these all out anyway? They might as well talk about the correct way of sharpening a pecil or what type of notebook to buy or how to edit and paste on Word or.....(yawn).

Rules suggest regimentation, control, limits, fear, and conformity. But to write, you got to be BRAVE. You've got to laugh at the rules and write without them looming in front of you like an angry professor. You are a writer - language is your tool - respect it sure, but don't be afraid of it. If you want to be a jockey, you can't be afraid of horses. Or a professional swimmer, you can't fear water. You have to open yourself to all the wondrous possibilities that your field offers. Be fearless, be confident in your abilities and your knowledge of language, and its quite malleable qualities, and then you'll find your groove.

Rules suggest that someone has actually mastered the craft of writing and is all-superior, all-knowing. But truth is, writing is a craft we continually learn from. It can't be mastered; it is ever-evolving and its most defining characteristic is mystery: even the bestselling writers still don't know where most of their work 'comes from.' (It definitely didn't come from sticking to the rules that's for sure!)

Thankfully, most writers 'rules' on writing are in the form of advice and encouragement (which is great). Margaret Atwood urges us to 'write in pencil, especially on aeroplanes.' And one of my favourites, Hemingway recommends us to 'write drunk and edit sober.'  Never trust the ones who spout grammar rules - trying to enforce a sanitised form of regulated writing - it may have worked for them, but chances are, it won't for us. Each to their own.

The only rule of writing is to write often and whatever way you like. Even in gibberish if that suits your mood or theme! Why not? JRR Tolkien and Lewis Carroll invented their own language to authenticate their fictional worlds and had no qualms about inserting it into the narrative. Poets create their own words - neologisms -  all the time. Emily Dickinson brought the hyphen into fashion. Some writers have even opted out from using punctuation. Some refuse speech marks for dialogue. Some have one sentence chapters. Lots use the word 'suddenly' and to great effect.

Writing is expression, freedom of speech, so why should it be regulated by the paltry dictations of grammar or a few opinions of other writers?

It shouldn't. Rules are made for breaking after all. (Or at the very least, bending...) That's why I just ended with a cliché! ;)

'Til the next time,