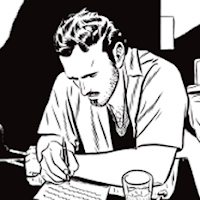 I came across this article in The New Yorker and just had to share it (here's the link: Jeffrey Eugenides's Advice to Young Writers)

It's the text adapted from a speech writer Jeffrey Eugenides gave to the Whiting award winners in 2010.  The Whiting Writers' Award is an American award presented annually to ten emerging young writers in fiction, nonfiction, poetry and plays with bursaries to advance their writing careers.

For one thing, it's one of the few articles I've come across that addresses young writers, yay! At last!

Because, really, what is it about young writers that they are often overlooked for the older ones, especially the older male writers, the so-called 'geniuses' of the craft? Apart from Rilke's 'Letters to a Young Poet', I can't think of any other pieces dedicated solely to young writers.  It's like we're a lesser species!

I especially remember one time being lambasted by an elderly gentleman when I said I write to which he replied he hadn't met any 'young' person before who writes and continued - 'that's probably because older people have more experience to write about', inadvertently igniting my defence firing missiles - which went something along the lines of: Pah! Writing ain't all experience  - rather it's about having an unique perspective and observer stance and talent and style and imagination and ability to express in language what most people can't even acknowledge. It is a craft that disregards how may years you've got clocked up!

Some of the best writers are (and have been) young writers. (Keats, anyone??) And the most exciting writers are often young writers - who are not afraid to embrace innovative styles - look at Jack Kerouac and the never-ending roll of stream-of-consciousness travelogue/existential manifesto (which can now be found in the 'Classics' section of most bookshops).

Young writers and their budding writer status are acknowledged in this article. Eugenides speaks of the spark of writerly otherness in these budding writers and encourages it - that's what I think is so great about the article.  Like here, in the first part of the piece when he addresses that moment of awakening within every writer which usually occurs in childhood (it is implied):

'When you started writing, in high school or college, it wasn’t out of a wish to be published, or to be successful, or even to win a lovely award like the one you’re receiving tonight. It was in response to the wondrousness and humiliation of being alive. Remember? You were fifteen and standing beside a river in wintertime. Ice floes drifted slowly downstream. Your nose was running. Your wool hat smelled like a wet dog. Your dog, panting by your side, smelled like your hat. It was hard to distinguish. As you stood there, watching the river, an imperative communicated itself to you. You were being told to pay attention. You, the designated witness, special little teen-age omniscient you, wearing tennis shoes out in the snow, against your mother’s orders. Just then the sun came out from behind the clouds, revealing that every twig on every tree was encased in ice. The entire world a crystal chandelier that might shatter if you made a sound, so you didn’t. Even your dog knew to keep quiet. And the beauty of the world at that moment, the majestic advance of ice in the river, so like the progress of the thoughts inside your head, overwhelmed you, filling you with one desire and one desire only, which was to go home immediately and write about it.'

And I don't know why, but for some reason, I've always associated New York with young writers. An ideal place of nurturing. (Maybe it's because I've seen countless TV serieses and films where young writers are taken under the bosom of older mentor writers in New York amongst the Brooklyn fire-escapes and panelled libraries and the buzz of The New Yorker  and multiple writing retreats and internships and the cityscape a happening background to all kinds of verbal comings-of-age.)

I've seen new publications recently hit the shelves entitled '30 Under 30' and the like celebrating and showcasing young writers, which is great. Maybe the stereotype is shifting.


'To die your whole life. Despite the morbidity, I can't think of a better definition of the writing life. There's something about writing that demands a leave-taking, an abandonment of the world, paradoxically, in order to see it clearly. This retreat has to be accomplished without severing the vital connection to the world, and to people, that feeds the imagination. It's a difficult balance.'

And maybe that's what that man I was talking to (briefly I might add) was referring to when he said older writers have more 'experience.' Maybe some might think it's easier for older people to remove themselves from life in order to to observe it and write about it, seeing as they have already 'lived' their life and are now keen to pen the autobiography! But this entirely wrong view sees writing as a step you progress to, a maturity badge, an older people only practice. But, as Eugenides says here, writing requires two conflicting things: to immerse oneself in life and to remove oneself from it almost simultaneously; it is a balance to be maintained consistently, the whole way through life. And only from this balance, will good writing flourish forth.

And I might add, it is this balance that young writers have been coming to terms with ever since they first laid pen to paper. As such, we've become quite adept at it.

25 Best Novels Written by Writers Under 30