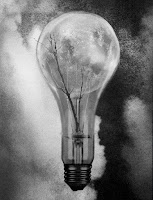 I am aware that I have countless posts on this blog about the moon. But what's one more eh? Especially since we have just experienced a blue moon last week.  That's right, a rare blue moon. It must be its bright pendulum that is still swaying my thoughts at the moment to all things lunar.

The moon of course is a poet's most beloved muse. Muse and mentor. Metaphor-maker and talisman. A currency. A lightbulb of inspiration.  An occupational heart-ed object. A slice of sky on which all hopes and dreams get pinned, poetic preambulations plotted. The moon pulls the words in us like it does the tides: back and forth, to and fro, skimming and flooding the blank page of the mind. Our luminous patroness.

The moon, as I've mentioned in other blogs (you can access them by clicking on the 'moon' label below this post') is something special to poets. We, supposedly, write by the light of the moon. This may not be true literally, but it holds metaphorically. Its luminescence is our light by which we 'see' things, its steady orbit of earth our mind in its forever watchful pose.

If you are a poet, it's a surefire bet you've written one or two poems about the moon, if not a truckload. I know I have. The moon in all its manifestations: new moon, half moon, full moon, dark of the moon, harvest moon, pink moon, blue moon. And indeed, by the light of the moon - of which I mean at night, bathed in the glow of its unobtrusive light.

The moon offers countless imaginings to poets: it can be a female deity (this is especially true for many female poets' poems - Carol Ann Duffy's 'Woman in the Moon' is a highlight as is Anne Sexton's 'Moon Song, Moon Woman'; Alice Oswald also has a few great feminine odes to the moon), a disco ball, a disembodied person, a source of romance, of mysticism, of inspiration, of myth vs reality, of ever-constant guardian or silent witness. There are poems in which the moon speaks or in which the poet addresses the moon like an old friend, a romantic overseer. I particularly love Carl Sandburg's 'Backyard' poem in this respect, it's so jubilant and full of the notion of romantic celebration/transformation.  And Billy Collins' 'The Man in the Moon' has such an endearing quality to it. It describes so nonchalantly the moon's ever-there presence in a poet's life, moving through extremes of emotion for that grand ending which also expresses the poet's own unbridled joy at the sight of the moon.

Poems in which the moon is mused upon from a scientific perspective (Archibald Mac Leish's 'Voyage to the Moon' was an imaginative inquisitve response to the 1969 landings; May Swenson  also does a great one on this topic, of which I've posted here before in a previous blog so won't again), a romantic enchantment, or most often a luminously inspired state, even, a lonely solitary one.  Loneliness and the moon are so often intertwined, the moon has come to stand as a symbol of the state, a talisman, a globed sigh hung in the night sky. But it also seems to represent beauty through solitude - a lonely, but beautiful presence. Sara Teasdale's short poem on this 'Morning Song' is gorgeous and offsets loneliness and sadness so beautifully with the idea of solitude, of independent freedom of mind and body, it is one of my favourites for sure. Or the last poem I've posted here, a concrete poem on the moon, pokes fun at all the descriptions heaped on the moon, but then ends on a simple, short almost whispered confession of one truth - the loneliness of the moon.

For some, the moon is light, proof of life beyond our earth, and to others it is the light of the mind, the illumination within when inspiration strikes. I adore Mark Strand's musing on it, 'Open the book of evening to the page/where the moon, always the moon appears...'  Or Kojiju's ode proposing that even to know that the moon exists is to be certain of light not only in night, but in the uncertainty of our universe, in the darkest mysteries of life and what lies beyond.

The moon as it appears in poetry can be magic, can be balm,  or just mystery. A constant companion or an aloof indifferent onlooker, sometimes an advocate for lunacy.  Always though, it is a charm, which exerts an undeniable and sometimes inexplicable power on the poet and the reader.  I cannot get enough of moon poetry - writing and reading it. I search out poems on the moon with something of an explorer's gleeful momentum. Every time I find a new one, it is like the moon has been rediscovered - it is new and gleaming once again. Moon poems shine with a light that comes from awed observance and perceptive finely-tuned poetic antennae.

It seems every poet has written at least one ode to it. Some seem truly smitten, the likes of: Carl Sandburg, Emily Dickinson, Billy Collins, Mark Strand, Alice Oswald, Ted Hughes, Sylvia Plath, WH Auden.  I want to post a few of those poems here today, a few of my my favourites, poems that I have not already posted here.  I hope you will enjoy them and feel moved to suggest some of your favourite moon poems?

*Most of these poems are taken from this wonderful anthology:

Merely to know
The Flawless Moon dwells pure
In the human heart
Is to find the Darkness of the night
Vanished under clearing skies. 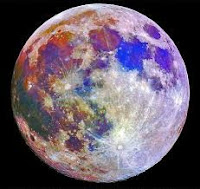 The Man in the Moon - Billy Collins

He used to frighten me in the nights
of childhood,
the wide adult face, enormous, stern, aloft
I could not imagine such loneliness, such coldness
But tonight as I drive home over
these hilly roads
I see him sinking behind stands of winter trees
And rising again to show his familiar face
And when he comes into full view
over open fields
he looks like a young man who has fallen in love
with the dark earth
a pale bachelor, well-groomed and
full of melancholy
his round mouth open
as if he had just broken into song.

Open the book of evening to the page
where the moon, always the moon appears
between two clouds, moving so slowly that hours
will seem to have passed before you reach the next page

where the moon, now brighter, lowers a path
to lead you away from what you have known

into those places where what you had wished for happens,
its lone syllable like a sentence poised

at the edge of sense, waiting for you to say its name
once more as you lift your eyes from the page

close the book, still feeling what it was like
to dwell in that light, that sudden paradise of sound.

I stole forth dimly in the dripping pause
Between two downpours to see what there was.
And a masked moon had spread down compass rays
To a cone mountian in the midnight haze,
As if the final estimate were hers;
And as it measured in her calipers,
The mountain stood exalted in its place.
So love will take between the hands a face...

At sixteen I believed the moonlight
could change me if it would.
I moved my head
on the pillow, even moved my bed
as the moon slowly
crossed the open lattice.

I wanted beauty, a dangerous
gleam of steel, my body thinner,
my pale face paler.
I moonbathed
diligently, as others sunbathe.
But the moon's unsmiling stare
kept me awake. Mornings,
I was flushed and cross.

It was on dark nights of deep sleep
that I dreamed the most, sunk in the well,
and woke rested, and if not beautiful,
filled with some other power.

I am alive at night.
I am dead in the morning,
an old vessel who used up her oil,
bleak and pale boned.
No miracle. No dazzle.
I’m out of repair
but you are tall in your battle dress
and I must arrange for your journey.
I was always a virgin,
old and pitted.
Before the world was, I was.
I have been oranging and fat,
carrot colored, gaped at,
allowed my cracked o’s to drop on the sea
near Venice and Mombasa.
Over Maine I have rested.
I have fallen like a jet into the Pacific.
I have committed perjury over Japan.
I have dangled my pendulum,
my fat bag, gold, gold,
blinkedly light
over you all.
So if you must inquire, do so.
After all I am not artificial.
I looked long upon you,
love-bellied and empty,
flipping my endless display
for you, you my cold, cold
coverall man.
You need only request
and I will grant it.
It is virtually guaranteed
that you will walk into me like a barracks.
So come cruising, come cruising,
you of the blast off,
you of the bastion,
you of the scheme.
I will shut my fat eye down,
headquarters of an area,
house of a dream.

Voyage to the Moon - Archibald MacLeish

Wanderer in our skies,

A diamond of a morning
Waked me an hour too soon;
Dawn had taken in the stars
And left the faint white moon.

O white moon, you are lonely,
It is the same with me,
But we have the world to roam over,
Only the lonely are free. 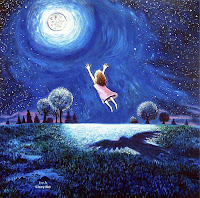 Shine on, O moon of summer.
Shine to the leaves of grass, catalpa and oak,
All silver under your rain to-night.

An Italian boy is sending songs to you to-night from an accordion.
A Polish boy is out with his best girl; they marry next month; to-night they are throwing you kisses.

An old man next door is dreaming over a sheen that sits in a cherry tree in his back yard.

The clocks say I must go—I stay here sitting on the back porch drinking white thoughts you rain down.
Shine on, O moon,
Shake out more and more silver changes.