Here in Ireland we're in the midst of a Yeats frenzy. This year sees the celebration of our esteemed national poet's 150th birthday (13 June) and a series of events and publications to mark the occasion. (You can check out the content with the hashtag #Yeats2015).

Yeats is our great national poet, the poet responsible for the forging of the national character in letters. We owe him a great deal. Yeats the smiling public man, Yeats the learned man, the politician, the arts and culture activist who was involved in the Anglo-Irish Literary movement and more, who campaigned for the place of the arts in our new national consciousness, Yeats the Nobel-Prize winning poet whose skill sharpened as the years went on, Yeats the lovelorn suitor forever in love with Maud Gonne, his greatest muse, his unrequited love, Yeats the dreamer, the romantic, the believer in fairies and magic. I like this last persona of him best I think. The story of how his neighbours in Sligo would see him out walking, muttering away to himself, 'talking to himself' as they put it, or 'away with the fairies', as locals were wont to say, is one I always think of first when I think of Yeats. Of course as every poet knows, he must have been only testing his lines, trying out their rhythm, measuring and moving the words until they were pitch perfect. A man whose profession was a projection of who he was, and vice versa.


Truthfully, I must admit that Yeats wouldn't be one of my favourite poets.  I admire him greatly, but a lot of his poems for me seem either too coded what with all the allegories and references both classical and mystical, or, too vague. (It was with a certain degree of glee alright that I debunked his rural idyll construct in an essay once, preferring the realists of contemporary writers.) But I do love his language. All the lyrical ardor of it. And I love his romanticism ,even if it is misplaced at times. I especially love the descriptive word 'Yeatsian' for all that it implies: the dreamy, romantic, magical, lyrical world in which his poems are set and scripted, the lyrical, finely-wrought verse that pleases the eye as well as the ear, the heart as well as the head.

I find that I love specific lines from his poems more than the entire poems themselves. I couldn't really name you a favourite poem of his (there's a few that wrestle for attention), but I could joyfully recite many favourite lines like: "Come away oh human child, to the waters and the wilds, for the worlds's more full of weeping than you can understand," or the beautiful and evocative "the silver apples of the moon, the golden apples of the sun," or that dramatic tragic declarative refrain of Easter 1916: "All changed,changed utterly, a terrible beauty is born." In all historical accounts of the 1916 Easter Rising I've read, nothing has so effectively summed it up as those terse lines.

I love Yeats's lines as they are so condensed: so much is said in so short a space and said so eloquently. They are resplendent with deep reverie. Feelings, theories, politics, lessons are mashed down into a compact pulp that carries all the meaning of the poem, and can relay a lengthy thesis into a bite-size caption, one that will stick in the head and heart. Truths are coined and contained in the concrete of his sentences: 'The best lack all conviction, while the worst are full of passionate intensity' from 'The Second Coming' is a simple way of explaining the complex problems inherent at the heart of all world crises. Yeats has so many of these lines and it is them that I think of when I think of Yeats' poetry.  Lines that lap on the shores of my mind with syncopated loveliness. Lines that  rhyme just enough to be easily remembered.  Lines that soothe and swoon. Lines that shine the bright light of epiphany. Lines that demand recitation, that long to be spoken aloud, sounded on the breath. Lines that are like words from a spell, incantations of dreaminess. Lines as fragile as dew drops that loop an ethereal idea. Lines that are hearts ease. Lines that are stepping stones to a different plane of existence, that transform and transcend.

Yeats' lines are famous, not only on the tip of tongues but in popular culture too. Did you know that Cormac Mc Carthy's book (and the subsequent film) 'No Country  For Old Men' took its title inspiration from that very line in 'Sailing to Byzantium'? And that Spielberg's film 'A.I.' about artificial intelligence used the refrain from 'The Stolen Child' as a way of illustrating the young robot boy's wish to be human? And I remember once reading a book which took its whole premise and plot from the main character's remembrance of the poem 'The Song of Wandering Aengus'.

For my marking of #Yeats 2015 here, I'm going to share some of these lines here. I hope you enjoy them and, if you feel so inclined to, share your experiences or favourite lines or poems of Yeats. 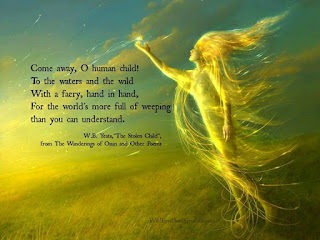 "I will arise and go now, and go to Innisfree...
And I shall have some peace there, for peace comes
dropping slow...
There midnight's all a glimmer, and noon a purple
glow...
I hear it in the deep heart's core."
~The Lake Isle of Innisfree 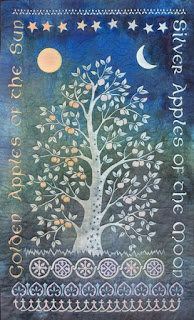 "And pluck till time and times are done
The silver apples of the moon,
The golden apples of the sun."
~ 'The Song of Wandering Aengus'

"From our birthday, until we die,
Is but the winking of an eye;"
~'To Ireland in The Coming Times'

"A line will take us hours maybe;
Yet if it does not seem a moment's thought,
Our stitching and unstitching has been naught."
~'Adam's Curse'

"How can we know the dancer from the dance?"
~'Among School Children'

"The best lack all conviction, while the worst
are full of passionate intensity."
~'The Second Coming'

"An aged man is but a paltry thing,
A tattered coat upon a stick, unless
soul clap its hands and sing, and louder sing..."
~'Sailing to Byzantium'

"Irish poets learn your trade,
Sing whatever is well made."
~ 'Under Ben Bulben'

"I shall have written him one
Poem maybe as cold
And passionate as the dawn."
~'The Fisherman'

"I must lie down where all ladders start
In the foul rag and bone shop of the heart."
~ 'The Circus Animals' Desertion'

"I have spread my dreams under your feet;
tread softly because you tread on my dreams."
~ 'He Wishes for the Cloths of Heaven' 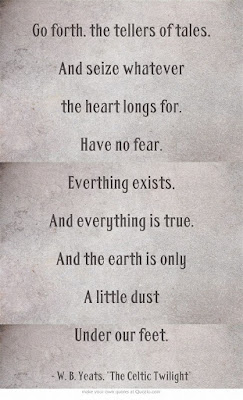