I just have to share this amazing article by Neil Gaiman for The Guardian last week:
Neil Gaiman: Why Our Future Depends on Libraries, Reading & Daydreaming

It was an instant hit online and has been doing the rounds since. If you haven't read it already, I urge you, do!

It was taken from Neil Gaiman's lecture for the Reading Agency last week explaining why using our imaginations, and providing for others to use theirs, is an obligation for all citizens. For anyone who doesn't know, Neil Gaiman is a popular fantasy/sci-fi/genre-bending writer of notable works such as The Graveyard Book and noted for providing much commentary to the discourse on the importance of literature in our lives. In this article, he surpasses himself though. He states his aim as the beginning:

'I'm going to suggest that reading fiction, that reading for pleasure, is one of the most important things one can do. I'm going to make an impassioned plea for people to understand what libraries and librarians are, and to preserve both of these things.'

'...words are more important than they ever were: we navigate the world with words, and as the world slips onto the web, we need to follow, to communicate and to comprehend what we are reading. People who cannot understand each other cannot exchange ideas, cannot communicate, and translation programs only go so far.'

He makes the point that fiction builds empathy (a recent article on this in The New York Times has also been an Internet viral success: For Better Social Skills, Scientists Recommend a Little Chekhov ) and adds that:

'You're also finding out something as you read vitally important for making your way in the world. And it's this:The world doesn't have to be like this. Things can be different.
Fiction can show you a different world. It can take you somewhere you've never been. Once you've visited other worlds, like those who ate fairy fruit, you can never be entirely content with the world that you grew up in. Discontent is a good thing: discontented people can modify and improve their worlds, leave them better, leave them different.'
The piece is a singing homage to the imagination and flourishers of the imagination - language, literature, reading, writing. He ends with a rousing declaration stating an obligation to daydream:

'We all – adults and children, writers and readers – have an obligation to daydream. We have an obligation to imagine. It is easy to pretend that nobody can change anything, that we are in a world in which society is huge and the individual is less than nothing: an atom in a wall, a grain of rice in a rice field. But the truth is, individuals change their world over and over, individuals make the future, and they do it by imagining that things can be different.'

An obligation to daydream? Imagine that! How many times have we been told to get our heads out of the clouds, stop staring into space, stop fantasising? Now, here is a writer and an accomplished man of letters making a public plea NOT to listen to this. To daydream on defiantly. Blessed are the daydreamers; they maketh the world. To imagine to infinity (and beyond). And by doing so, to make the world a better place. 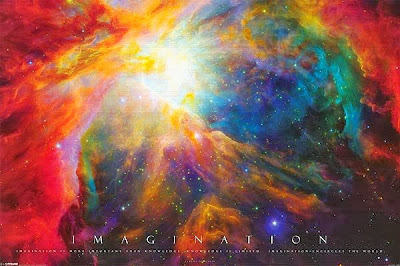 'Imagination is more important than knowledge; knowledge will get you from A-Z, imagination encircles the worl.' ~ Albert Einstein