A Meditation on Time

Last night the clocks went back into what is now known as official Winter Time. I read a wonderful article in the paper yesterday by  Dermot Bolger on this phenomenon, and what time and this new season really mean (unfortunately it doesn't have a link!) He talked about how  winter is a time to reflect upon our lives, a 'time-out' if you like. A time, as he quoted Byron of saying - that 'the heart must pause to breathe'.

Which got me to thinking (and googling) a lot about - Time. Some of my favourite quotes I found on it I've posted below for you to read.

Note the either positive or negative attitude to Time in them. Time as a 'tyrant' or Time as a gift. Time as a thief, out of our hands, or - entirely in them. I love the quote from The Curious Case of Benjamin Button rebuking Time. This F. Scott Fitzgerald short story recently made into a movie, tells the story of Benjamin Button, a boy who is born 'old' and throughout his life ages backwardly. A curious meditation that causes you to ponder what is the real meaning of Time. Is it an obstacle or an irrelevant detail? Should we be squashed under its steel fist or ride on the crest of its ever-moving wave? 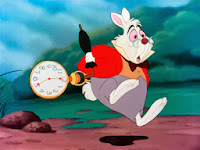 How often do we feel the burden of Time on us in day-to-day living, not just wholesome reflection. Sometimes I feel exactly like the white rabbit from Alice in Wonderland running around with a pocket watch all the time, perpetually late (I'm even haunted by him - often when I'm in mid-rush to something I'm late for, his blasted refrain is running through my head: 'I'm late, I'm late! For a very important date! No time to say hello, goodbye, I'm late, I'm late, I'm late, I'm late! Which just puts me into more of a frenzy...!) It's only recently I've decided to ditch the watch and move in a more relaxed manner,  adopting the easy manner of many friends - ie. the 'we'll get there in the end, what's the hurry?' maxim.

A lot of people profess things like 'There's not enough time in the day!' and the like, but there is. There is ample time. Everyone's day is the same length let's not forget. We have to start kicking the ghoulish time-masters looming over us, be ita white rabbit refrain, Labyrinth king David Bowie or a looming scythe. Everyone moves at different speeds - literally and metaphorically. Comparing our time and what we've done with it to others is certainly going to be a slam-stopper.

When we look back on our life so far and think, like everybody, 'where the heck did all those years go?!, maybe we can console ourselves with some of the wise theories from these thinkers below. Time and its passing, is always a mystery to us. But what do we have against its sheer force? Well, for one, memory. Just look at Dali's painting below, 'The Persistence of Memory', in which the clocks (ie. Time) have been melted by the power of memory. Memory is a magic that makes everything seem in the here-and-now. And not just a reliving, but a rekindling of experience, a recalibration of wisdom gleamed.

Another way to 'melt' Time, is to forget about it, to live your life as thoroughly and enjoyably as possible. To lift the many self-imposed curfews and deadlines and appreciate the 'Now'. To be aware and appreciative of the present moment, so that every moment swallowed by time need not be lost, but live on well in service of us. Then Time becomes no longer a master, but a servant, a gift not a ghoul, bearing flowers rather than a scythe.

And now in Winter Time, we have an extra hour in the day (well, what seems like so) for the next while (before its effects wear off). No matter dark or light the hour, another chance given to us by Time to make the most of our wonderful lives. For 'we have all the time in the world' according to Louis Armstrong, 'nothing more, nothing less... only love.'

How about you? What's your take on time? Are you burdened or buoyed by it? What is your favourite quote on it?

For the time being (aha)

'Time in the hand is not control of time' ~ Adrienne Rich, 'Storm Warnings'

'This time, like all times, is a very good one, if we but know what to do with it.' ~ Ralph Waldo Emerson
'Dost thou love life? Then do not squander time, for that the stuff life is made of.' ~ Benjamin Franklin
'Time sometimes flies like a bird, sometimes crawls like a snail; but a man is happiest when he does not even notice whether it passes swiftly or slowly.' ~ Ivan Turgenov

'Oh! Do not attack me with your watch. A watch is always too fast or too slow. I cannot be dictated to by a watch.' ~ Jane Austen, Mansfield Park

The Persistence of Memory ~ Salvador Dali: '
'We all have our time machines. Some take us back, they're called memories. Some take us forward, they're called dreams.' ~ Jeremy Irons
'Time is an illusion.' ~ Einstein
'Time is the coin of your life. It is the only coin you have, and only you can determine how it will be spent. Be careful lest you let other people spend it for you.' ~ Carl Sandburg
'Time is the most valuable thing a man can spend.' ~ Theophrastus
'Time you enjoyed wasting, is not time wasted.' ~  John Lennon

'Time stays long enough for anyone who will use it.' ~ Leonardo Da Vinci
'But what minutes!  Count them by sensation, and not by calendars, and each moment is a day.' ~Benjamin Disraeli
"Clocks slay time... time is dead as long as it is being clicked off by little wheels; only when the clock stops does time come to life." ~ William Faulkner, The Sound and the Fury
“Life is but a day: A fragile dewdrop on its perilious way from a tree's summit”~ John Keats
'Time isn’t precious at all, because it is an illusion. What you perceive as precious is not time but the one point that is out of time: the Now. That is precious indeed. The more you are focused on time—past and future—the more you miss the Now, the most precious thing there is.' ~ Eckhart Tolle

"Life is fleeting. Don't waste a single moment of your precious life. Wake up now! And now! And now!” ~ Ruth Ozeki, A Tale for the Time Being
“I confess I do not believe in time. I like to fold my magic carpet, after use, in such a way as to superimpose one part of the pattern upon another. Let visitors trip. And the highest enjoyment of timelessness―in a landscape selected at random―is when I stand among rare butterflies and their food plants. This is ecstasy, and behind the ecstasy is something else, which is hard to explain. It is like a momentary vacuum into which rushes all that I love. A sense of oneness with sun and stone. A thrill of gratitude to whom it may concern―to the contrapuntal genius of human fate or to tender ghosts humoring a lucky mortal.” ~ Vladimir Nabokov
“For what it’s worth: it’s never too late or, in my case, too early to be whoever you want to be. There’s no time limit, stop whenever you want. You can change or stay the same, there are no rules to this thing. We can make the best or the worst of it. I hope you make the best of it. And I hope you see things that startle you. I hope you feel things you never felt before. I hope you meet people with a different point of view. I hope you live a life you’re proud of. If you find that you’re not, I hope you have the courage to start all over again.” ~ The Curious Case of Benjamin Button