The Seasonal Turn: A Meditation on Change & Loss

'You expected to be sad in the fall. Part of you died each year when the leaves fell from the trees and their branches were bare against the wind and the cold, wintery light.'
~ Ernest Hemingway, A Moveable Feast

'And you would accept the seasons of your heart just as you have always accepted that seasons pass over your fields and you would watch with serenity through the winters of your grief.' ~ Kahlil Gibran

It's September. The end of summer, the start of autumn. The month when nights start to overtake days. Back to school month, back to work, back to basics. The 'scythe' of the harvest coming to cut us down or sweep us onwards.

And I'm having a hard time adapting, a very hard time. Like a lot of people I suffer from SAD - Seasonal Affectional Disorder (self-diagnosed but not self-inflicted) and dread this time of year. It's like I 'rage, rage at the dying of the light', but to no avail. The darkness keeps on seeping in, evening after evening, and with it, the fading of all summer memories, those shiny evenings and days full of possibility. Now all that seems null and void somehow, a vague far-off memory. And I'm left miserable and moping, trying, but failing, to find my feet in a new season, a new interior and exterior landscape.


Everyone identifies with a season. My favourite is spring - the season of beginnings, when the earth is starting to awaken after a long winter's sleep and everywhere hope gleams in the brightening of the sky, the lengthening of days, the greening of our surrounds. If I could describe it in a few words it would be: hope, possibility, enthusiasm. And you're supposed to embody the attributes of the season you were born in. Autumn is the complete opposite to spring and so I find it incredibly difficult to set my inner bearings to. It is the opposite of everything I love inherently. 'Season of mists and mellow fruitfulness....' I think Keats forgot to mention 'melancholy' in there when he penned his famous 'Ode to Autumn.'

I know there are so many people who love Autumn, seeing it as the crowning jewel of the four seasons with all its colours and poetic licence. Next month, when we're almost knee-deep in leaves, I'll have adjusted just enough to learn to like the season, because of course I appreciate that every season has its merits, and as an artist, you can't but be open to them. But it still stings my soul a little, all the while.

The seasons of course have their reflections in life. The cyclical process of change and the different emotional landscapes we must go through are signalled by the earth's seasons.


And it's especially this year that I feel so keenly the stripping of the trees and the approach of the dark. I feel it because I have just lost someone -  a light, a love, a muse, a possibility. And with that, the season creeps in as a spectre I suppose.

'Pathetic fallacy' - that technique in writing in which the weather mirrors the emotions of the characters - feels so true to form right now. The past month it's done nothing but rain. And the sky has greyed over with big steel clouds, suffocating, heavy, pressing down like a gag.  And if that wasn't bad enough, now comes the turn in the season: the odd yellowing leaf in foliage, the chill in the air, the dark days, the long-lasting nights - the pre-cursors to the barreness and bleakness that is to come. Change, change, 'a terrible beauty' being born. Everything seems to underscore the emptiness and sadness I feel. In another season, maybe I could triumph over this personal loss, but in this one, I feel like I'm sinking into its sorrow.

There's no more euphoric sight in nature to me than trees in full bloom, thick and green. They represent new beginnings, possibilities and hope, in thick leafy abundance. When I see them lose these leaves in winter, I can't help but despair a little - that pathetic fallacy again, but vice-versa. Exactly as Hemingway said, it was like 'part of you died.' And now I feel it all the worse, because this time, it's the same with my personal situation. I know the change has to happen, I know emptiness will only lead the way to new growth, is actually necessary for it, but still, it doesn't lessen the pain of it.

'In this world of change, nothing which comes stays, and nothing which goes is lost.' I know everything is a part of the cyclical process, but is it ok sometimes, to step back and mourn some losses? I know people come and go from our lives, I know no one is permanent. But still, it's hard when you have to say goodbye to someone who has made such an infallible difference in your life. It's hard to let go. With all those memories of spring and summer, all those possibilities, lighting the mind, it's hard now to suddenly to let go and embrace the darkness of the oncoming unstoppable autumn/winter.

But resistance is futile. And letting go necessary. It is an act of love too. Letting people go to get on with their lives, to take paths more suitable to them, and in the long run, better. I know that. 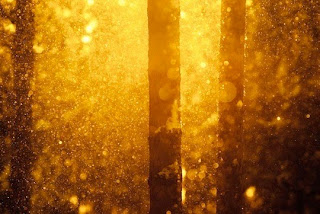 Well, now I must say goodbye to not just a person, but a possibility. The grand gleam of a life gilded gold with his touch. Myth or not, his presence was a light in my life. A light that dispelled many darknesses. A golden thread to follow. An inspiration. A muse of the highest calibre, the sweetest disposition. Always, there was the golden possibility of finding treasure within ordinary days because he was there - underlying them, as a presence, an influence, an inspiration, a beacon, a motif of magic. Always, there was the possibility of so much more. Potential, like bottled gold light. Summer no matter what the season. Nothing could be brighter.

Now - to do without that.

The only thing I can compare it to is going rapidly from summer to winter. Loving the sun, and then learning to live without it. Like the displacement of SAD, or a kind of jetlag of the heart, a leaking and losing of light like blood. Now, I must learn to stand tall with bare branches and brace against the wind. With possibility gone, the bleakness of the season looms large. I wonder do the trees ever dread the winter, ever fear it?

So now as this person moves on into a different season of his life, I must too. Confront the season ahead - hunker down, wrap up, find new ways of lighting the dark - and stop dwelling in what might have been, in summer memories full of butterflies and sunlit amber evenings, nectar and giddy shine. Because summer doesn't last. No matter how much we wish it did. Life moves on. The great world spins on. And with it, I must too. As Tennyson put it,' forward, forward let us range, let the great world spin forever down the ringing grooves of change.'

I don't know if this post has any place here, but maybe it'll resonate with someone. I just needed to write it. To shed this deadening feeling that's been on me, like a deadbolt of chains, a stiffening of stone, since September has started. And to write something without acknowledging it, would seem a lie somehow.

As I sign off, I'll say I know there's gold in autumn too. The light, the leaves, the harvests that can be reaped. And that's where I'm trying to set my sights on now. And not endure the fate of Lot's wife, who turned to stone for looking back.

In the epigram to this post, I've quoted Hemingway. Though not the full quote. After those lines, he adds: 'But you knew there would always be the spring, as you knew the river would flow again after it was frozen.' Yes, I know it. Now just to believe in it.  And to find that 'serenity' to watch through 'the winter of my grief' as Kahlil Gibran says so beautifully. That would be nice.

A poem to illustrate these thoughts:

Learn from the winter trees, the way
they kiss and throw away their leaves,
then hold their stricken faces in their hands
and turn to ice;

or from the clocks,
looking away, unloving light, the short days
running out of things to say; a church
a ghost ship on a sea of dusk.

Learn from a stone, its heart-shape meaningless,
perfect with relentless cold; or from the bigger moon,
implacably dissolving in the sky, or from the stars,
lifeless as Latin verbs.

Learn from the river,
flowing always somewhere else, even its name,
change, change; learn from a rope
hung from a branch like a noose, a crow cursing,

a dead heron mourned by a congregation of flies.
Learn from the dumbstruck garden, summer’s grave,
where nothing grows, not a Beast’s rose;
from the torn veil of a web;

from our daily bread:
perpetual rain, nothing like tears, unloving clouds;
language unloving love; even this stale air
unloving  all the spaces where you were.