Tonight of course, is the Harvest Moon. For anyone who hasn't heard of it, it's simply the name given to the moon nearest to the autumnal equinox (Sept 21) and like other the moons, takes its name from the activities of the natural world at this time, which would be the harvest.

The harvest moon is the biggest of all the moons. This is due to the moon rising early and on the horizon at this time of year. It appears orange as we look at it through the earth's atmosphere, a gilded gold.  (for the science, you can read here)

I'll never forget the first time I saw a harvest moon - absolutely huge! The size of Jupiter I'd reckon if it happened to float by us. Massive. Compared to other moons. And low down on the horizon, pure gold in colour. It was a stunning sight.

A bit like this reaction:
"I was walking with a friend one hot August... As we rounded a corner we were both halted mid-stride by what lay before us. Looking out across the ocean we saw what appeared to be the lights of a great ship approaching, glowing orange across the water... As we watched, we realized our eyes had been playing tricks on us. What we were seeing was the rim of the harvest moon emerging from the sea, a monstrous, swollen apparition, its shape distorted by the atmospheric conditions; glowing and pulsing like an ember, craters and canyons were clearly visible on its surface like purple veins. 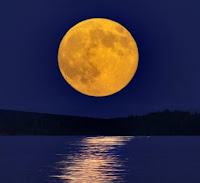 We stood for a few minutes before hurrying back along the path to the house where we were staying and calling our friends outside to toast the moon as it wobbled up into the sky. Later that night I was woken by the mournful bellow of a foghorn. Going to the window I saw that the moon had changed colour from tangerine to silver and was casting a blade of light over the perfectly still sea, across which a solid wall of fog was advancing towards the shore. On this night at least, in this distant corner of our crowded, congested archipelago, the moon still reigned supreme." - from 'Nocturne: A Journey in Search of Moonlight' ~ by James Attlee

Or this poem from Carl Sandburg, that describes the magic of it, the mystery it seems to embody, 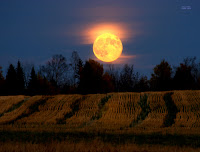 Under the Harvest Moon - Carl Sandburg

Under the harvest moon,
When the soft silver
Drips shimmering
Over the garden nights,
Death, the gray mocker,
Comes and whispers to you
As a beautiful friend
Who remembers.

Under the summer roses
When the flagrant crimson
Lurks in the dusk
Of the wild red leaves,
Love, with little hands,
Comes and touches you
With a thousand memories,
And asks you
Beautiful, unanswerable questions.

Then there's Ted Hughes descriptive take on it that neatly sums it up, 'the flame-red moon,' 'like a gold doubloon' on the horizon, 'booming softly through heaven like a bassoon': 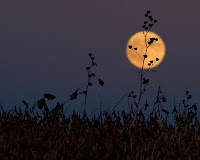 The flame-red moon, the harvest moon,
Rolls along the hills, gently bouncing,
A vast balloon,
Till it takes off, and sinks upward
To lie on the bottom of the sky, like a gold doubloon.
The harvest moon has come,
Booming softly through heaven, like a bassoon.
And the earth replies all night, like a deep drum.

So people can't sleep,
So they go out where elms and oak trees keep
A kneeling vigil, in a religious hush.
The harvest moon has come!

And all the moonlit cows and all the sheep
Stare up at her petrified, while she swells
Filling heaven, as if red hot, and sailing
Closer and closer like the end of the world.

Till the gold fields of stiff wheat
Cry `We are ripe, reap us!' and the rivers
Sweat from the melting hills.

Then, there's this lovely meditation on just what it is the moon can mean: 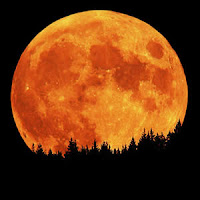 You are not beaten. The simple music rises up,
children's voices in the air, sound floating out
across the land and on to the river beyond,
over the valley's floor. No, you cannot go back
for those things you lost, the parts of yourself
that were taken, often by force. Like an animal
in the forest you must weep it all away at once,
violently, and then simply live on. The music here
is Bach, Vivaldi; a chorale of children, a piano,
a violin. Together, they have a certain spirit
that is light, that lets in light, joyful, ecstatic.
"Forgive," said The Christ, and why not? Every day
that you still breathe has all the joy and murderous possibilities of your bravest dream.
Forgive. Breathe. Live. The moon has entered Virgo,
the wind shifts, blows up from the Delta, cools this valley,
and you are not beaten; the children sing, it is Bach,
and you are brave, alive, and human.

And what it means in cosmic terms? Well, astrologer Jonathan Cainer outlines it clearly today:

...We often feel a need, at Full Moon, to let out more of our true selves, to reject boundaries and barriers that normally keep us in check and to feel more aware of hidden magic. All Full Moons are powerful but when a Full Moon falls quite so close to the equinox, there's a strong celestial suggestion of 'recalibration'. Individually and collectively, we're growing aware of imbalances that may need rectifying and complications that could be simplified with surprising ease. (www.cainer.com)

In other words - change, renewal, a reaping of what is done in our lives and a moving on to sow for future seasons, a simultaneous saying goodbye to the old ('No, you cannot go back/for those things you lost...') and welcoming the new. What's that feeling called I wonder? I'm sure it's something like this -  'Love, with little hands, /Comes and touches you /With a thousand memories, /And asks you /Beautiful, unanswerable questions.'

But there's nothing that can sum up the feeling the Harvest Moon engenders than this famous song of the same title by Neil Young:


'Because I'm still in love with you I want to see you dance again
on this Harvest Moon...'

There, I hope I've given you a glimpse into what the Harvest Moon means. To me personally, it will always be that evening in September, on the cusp of change, the yellow fields beneath, the blue sky above, and the huge  harvest moon, poised like a tossed golden coin on the horizon, a harbinger of all good things to come.

I hope, wherever you are, you get the chance to see this year's Harvest Moon and if not, at least feel it.

It is the Harvest Moon! On gilded vanes
And roofs of villages, on woodland crests
And their aerial neighborhoods of nests
Deserted, on the curtained window-panes
Of rooms where children sleep, on country lanes
And harvest-fields, its mystic splendor rests!
Gone are the birds that were our summer guests,
With the last sheaves return the laboring wains!
All things are symbols: the external shows
Of Nature have their image in the mind,
As flowers and fruits and falling of the leaves;
The song-birds leave us at the summer's close,
Only the empty nests are left behind,
And pipings of the quail among the sheaves.
- See more at: http://www.poets.org/viewmedia.php/prmMID/20493#sthash.4PpT0dxH.dpuf
Posted by Siobhán at 20:34