Well, we're midway into April almost and I have to say I'm enjoying the #NaPoWriMo challenge of writing a poem a day! So far, I've missed none (probably go and jinx the Muse saying that....hmmm) and I'm feeling very self-disciplined for a change, yay!

Usually, poetry for me is a come-and-go business; I only write it when something strikes me: a word, a phrase, a thought, an image,  an emotion that needs to be pressed into words.

So it's oh so new for me to 'sit down and write' a poem not on a whim, and just on the responsibility I've set myself. And you know what, scared as I was of it, it's actually turned out to be quite fun. (And it also helps that I'm aided and abetted by two poet friends, joining in the challenge - thank you girls!) So hopefully, by the end of the month I'll have a boxful of poems, like butterflies (see above)... ready to let loose on the world. (Well, maybe.)

Anyway, seeing as it is National Poetry Month (and April, my favourite, most motivating of all the months!), I'm going to share a few of my poetry writing efforts here - something which I never really do, due to:
a/An innate fear. Poetry bares the soul you know - writing prose and blogs and stuff is relatively safe compared to the risky platform of poetry.
b/Not being good enough. Oh the affliction that every writer is plagued with! But Poets, being more sensitive (aha) feel it more.
c/ Copyright issues. If ever publication becomes a possibility...
d/ I don't want to bore everyone to tears or seem to be self-promoting! It's not that I particularly want any commentary, it's more so just to salute the whole idea of NaPoWriMo, as in -  lookey here, I'm doing it! And guess what? It's fun. Yes, poetry is fun!

BUT, I will make an exception in honour of the month that's in it and also, all posts from now on, I am triumphnat to announce - will be on the theme of poetry. Stay tuned for that! (I know I haven't been posting regularly, but will be back on form soon!)

And by the way, for those of you intrigued by the poem a day challenge - log on to  www.napowrimo.net for more details as well as a daily prompt!

Or so  -
the saying goes.
But really, you
could fool me

a hundred times
over and again,
and I'd still be
a fool
for you. 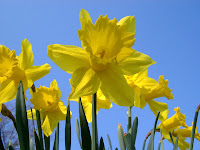 Narrative For A Bad Hair(Cut) Day

A loss of self, of strength? Like Samson -
all those lustrous locks
lobbed off, his source of power
hacked to pieces by sneaky
scissors (not an axe or a hatchet
blow) - warrior no more, denuded,
vulnerable, as if his hair
were sword and shield together.
Moral of the story? Vanity,
for sure. (A man with long hair?)

Or Rapunzel brave? Selfless -
sacrificing your own charms
to free yourself, abseil down
a forty foot tower terrace
(metaphorical, of course)
feeling the wind, finally
in your hair, leaving behind the coil
of the past, in a feminist twist.
Moral of the story? Freedom, self-realisation.
(Or, getting rid of the knots)

Exclamation point eyes
when you look at me,
stun my full-stopped self
into revision.

They say he came running up the rear
like a flash of sunlight.
No one expected it. Punters
clutched their prayer pleas
and huddled further
into the smacking down sun.
They were sorry now they’d chosen wrong.
But so is luck: sixty-six to one.

The wild whim of unheralded victory,
so much sweeter
than the oh-so-certain win.
Like Larkin's old horses
coming round again,
late on, like a cheer.  Dawn
again, a second chance, a new light,
a fable: sixty-six to one.

short
and sweet
and
to
the
point

a
peek-
a-
boo
sentiment
a hit
and
run
say
and
split
heart
flutter,

but
forever
lingering;
one simple
image
and a million
after-
thoughts
to hang on
to

the floating lotus
unaware of its beauty
keeps the eye watching.

The rise,
the fear,
the floating

the up, up and away
inflated giddy feeling
of being carried

to a different altitude,
a vantage point,
a grand vista view

where everything
is suffused with light
and the revelation

of new appreciation
harnesses hearts
together, fire and air

and faith combining
to make an apparatus capable
of sustaining flight.

But the dangers too:
putting yourself
in the arms of the elements,

steered by the whims
of an indifferent wind,
while always the threat

of deflating, of falling
back to earth,
back to ordinary.

© Siobhán McLaughlin
Posted by Siobhán at 20:42