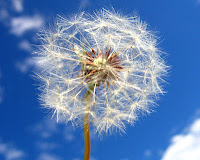 Hmm. This is my new venture - the Sunday poem. Sounds very literary doesn't it? But, it's just this: a poem offered as a whisper, a piece of peace in a sometimes chaotic day. Instead of a 'thought for the day', a 'poem for the day.' Like in the Sunday papers, but better choices of course! (Why, oh why must they serve up the traditional pickings as predictable as a Sunday roast when there are so many more fascinating poems and poets out there??? They certainly aren't doing anything to help poetry's reputation!!!)

I thought I'd start with one of my favourite poets - Alice Oswald. Why? Well honestly, because I just happened upon a collection of hers I have -  'Woods Etc' and opened it randomly. And how appropriate to May this one, with dandelions in full bloom, their fuzzy heads an invitation to fits of childish picking and blowing and wishing.


Alice Oswald is renowned for her original use of language, which can be clearly seen here, comparing the dandelion to an old woman being shaken to pieces. It is the flower of amnesia she points out -  ditsy and forgetful and scattered and scatty.  But it is also much more than that, a playful invitation to contemplation. The tipping point in the poem comes in the last line, with an unexpected reference to Osiris (mythical god of the afterlife) weighing the soul with a feather. (There are lots of mythical references in Oswald's poetry.)

Who would have thought the dandelion to be representative of the soul? Well, that's the beauty of poetry - uncanny comparisons that'll jolt you awake and link the seemingly ordinary everyday with the extraordinary world that exists parallel to it, layered in beauty  and meaning and spirit.

You can read more of Alice Oswald here.

Have a great Sunday,


Head of a Dandelion - Alice Oswald

This is the dandelion with its thousand faculties

like an old woman taken by the neck
and shaken to pieces.

This is the dust-flower flitting away.

This is the flower of amnesia.
It has opened its head to the wind,
all havoc and weakness,

as if a wooden man should stroll through fire…

In this unequal trial, one thing
controls the invisible violence of the air,

the other gets smashed and will not give in.

One thing flexes its tail causing widespread devastation,
it takes hold of the trees, it blows their failings out of them,
it throws in sideways, it flashes the river upriver;

the other thing gives up its skin and bones,
goes up in smoke, lets go of its ashes…

and this is the flower of no property,
this is the wind-bitten dandelion
worn away to its one recalcitrant element

like when Osiris
blows his scales and weighs the soul with a feather.