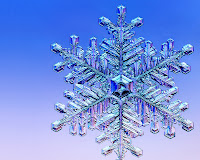 Oh, the weather outside is frightful....but I wish it would snow and be delightful!

Right now, there are threatening forecasts of snow, but no white stuff as of yet. (Sleet and so-called 'wintry showers' do not count). No, it has to be proper snow, snow that goes shin-deep and requires boots and trudging, snow that really is a parade of raindrops wearing fur-coats (came across this apt metaphor in a children's grammar book, and have memorised it since.)

To me, snow is the icing on the cake of Christmas (blaringly obvious simile, sorry.) And to lots of other people too. But snow is so many things more than the perfect meterological trimming. It's metaphor. It's revelation. It's discovery. Transformation. Magic. A manifestation of all those delicate wishings and notions that swarm in our hearts and minds like dust motes, never settling. Dreamings. Confirmation. A fulfilled promise. A benevolent blessing. Epiphany.

Just like every snowflake is unique and various, so is every snow. Every memory associated with it. Every happening. (Granted, last year the sheer exhausting extent of it did become characteristed by nuisance in the end-up!) But before all  of that, it's awe-inspiring beauty. A sort of deep transient beauty that stops you in your tracks, makes you ooh and ahh  at white wonderland scenes even as the cold seeps through your multi-layers and your extremities begin to freeze. It has the power to bring practical workings to an utter standstill. With this effect on the machinations of routine, what of that on our minds, and the less-insulated territory of our hearts?

Well I've included some of my favourite snow poems here to provide those answers.

First, Louis Mac Niece's 'Snow' which is incomparably fabulous in describing the comfort of sitting by a fire and  watching the snow, all the while basking in thoughts of the world being 'incorrigbly plural' and reeling in 'the drunkeness of things being various.' It perfectly captures that feeling of how snow transforms our ordinary world into something so different, so excitingly random and so much more open to the contemplation of possibilities and the pursuit of the extraordinary.

A previously used poem in this blog 'Snow' By Carol Ann Duffy, is the poem which depicts the harshness of snow and the deathly symbolism of it, 'a huge unsaying.' (See November post,  'Gilded Gold'.)  Snow can be death  indeed to many people, either a physical hardship or  just a never-ending wasteland to the mind, presenting, in unfathomable terms, the huge blankness of the existential dilemma - which is conjured so well in Wallace Steven's poem 'The Snow Man', a pondering at the end of the haunting puzzlement of  'nothing that is not there and the nothing that is.'

Or then there's just the fervour and excitement that comes with a 'snow-day', no work or school to go to, the whole day to yourself, to marvel at the snow and the new freedom from routine 'the world fallen under this falling' as in Billy Collins' 'Snow Day'. Indeed, who can resist 'the revolution of snow, its white flag waving over everything'? And do nothing but listen to its 'the grandiose silence', that is so truly grand and all-encompassing and full of soft nuances of meaning.

And in the famous sublime short story by James Joyce 'The Dead', the snow a sort of epiphany at the end, a quiet realisation of the inevitability of things, a subtle understanding of life and death and an acceptance of this, 'the soul swooning', I think is the ultimate use of snow in literature that I've come across. Certainly one of the most memorable. (And one on which I subconsciously base all my significant snow encounters for some reason...)

Lastly, on truly Irish terms, the Christmas ad from Guinness, which somehow reminds me of 'The Dead' everytime I watch it (maybe it's the Dublin/Dubliners setting?) and manages to roll all of what I've just said about what snow means - magic, revelation, epiphany etc- into a  simple 1-minute reverie. Watch and see.

I hope you enjoy reading these selections. And, I'm still hoping for the 'white stuff ' this year, even after last year's deluge.

The room was suddenly rich and the great bay-window was
Spawning snow and pink roses against it
Soundlessly collateral and incompatible:
World is suddener than we fancy it.

World is crazier and more of it than we think,
Incorrigibly plural. I peel and portion
A tangerine and spit the pips and feel
The drunkenness of things being various.

And the fire flames with a bubbling sound for world
Is more spiteful and gay than one supposes–
On the tongue on the eyes on the ears in the palms of your hands–
There is more than glass between the snow and the huge roses.

One must have a mind of winter
To regard the frost and the boughs
Of the pine-trees crusted with snow;

And have been cold a long time
To behold the junipers shagged with ice,
The spruces rough in the distant glitter

For the listener, who listens in the snow,
And, nothing himself, beholds
Nothing that is not there and the nothing that is.

Today we woke up to a revolution of snow,
its white flag waving over everything,
the landscape vanished,

not a single mouse to punctuate the blankness,
and beyond these windows

the government buildings smothered,
schools and libraries buried, the post office lost
under the noiseless drift,
the paths of trains softly blocked,
the world fallen under this falling.

In a while I will put on some boots
and step out like someone walking in water,
and the dog will porpoise through the drifts,
and I will shake a laden branch,
sending a cold shower down on us both.

But for now I am a willing prisoner in this house,
a sympathizer with the anarchic cause of snow.
I will make a pot of tea
and listen to the plastic radio on the counter,
as glad as anyone to hear the news

So this is where the children hide all day,
These are the nests where they letter and draw,
where they put on their bright miniature jackets,
all darting and climbing and sliding,
all but the few girls whispering by the fence.

And now I am listening hard
in the grandiose silence of the snow,
trying to hear what those three girls are plotting,
what riot is afoot,
which small queen is about to be brought down.

from 'The Dead' by James Joyce:

It had begun to snow again. He watched sleepily the flakes, silver and dark, falling obliquely against the lamplight. The time had come for him to set out on his journey westward. Yes, the newspapers were right: snow was general all over Ireland. It was falling on every part of the dark central plain, on the treeless hills, falling softly upon the Bog of Allen and, farther westward, softly falling into the dark mutinous Shannon waves. It was falling, too, upon every part of the lonely churchyard on the hill where Michael Furey lay buried. It lay thickly drifted on the crooked crosses and headstones, on the spears of the little gate, on the barren thorns. His soul swooned slowly as he heard the snow falling faintly through the universe and faintly falling, like the descent of their last end, upon all the living and the dead.