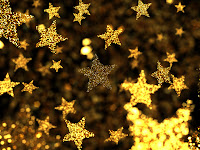 'Tis the season. To be jolly. To be over-indulgent. But also, to be reflective.  Peace-filled. And what better way to succeed in the latter than a few well-chosen poems?

Christmas is the ideal subject matter for poetry and poetry is the ideal medium for conveying the ethereal feel of Christmas. One of my favourite Christmas memories consists of watching a TV programme on Christmas poems, with some well-known actors reciting  a few festive favourites to montages of snow, brightly-lit shopping districts and tinsel and trees.

So I thought I'd try to replicate that somewhat here by including some of my favourite Christmas poems. (And very wise ones too, as all poems are of course.) All following the star of inspiration that this time of year provides and encapsulating the stardust-like magic of the season. And all based on the Christmas star motif and the wise men, strangely enough.

TS Eliot's The Journey of the Magi of course, is a classic, a poem about redemption and the search for something more in the midst of all the flippancies of modern life, 'I should be glad of another death'. UA Fanthorpe's BC:AD is a simple but stunning meditation on the season, 'walking haphazard by starlight' - aren't we all haphazardly stumbling around at this time of year? And then a favourite poet of mine, Alice Oswald's Various Portents. I adore this poem. I love the variety of it, the repetition, the emphasis, the whole wide-ranging vision,  how it speeds along, stop-starts frequently and then slows towards the end, towards the epiphany-quiet moment that we're all steering for, the winds 'blowing the stars towards them, bringing snow'. Read it and feel the tingles of recognition as some stars blow towards you.

And lastly, the star letter. In 1897, a young girl, Virginia, wrote a letter to the editor of The New York Sun, asking if there really was a Santa Clause. And the answer she received was the now infamous line: Yes, Virginia, there is a Santa Claus. Words that, everytime you hear them, cause a swelling up and a warm glowing of something, something that I like to refer to as belief. What the essence of the letter contains. And the essence of the season.

Happy Christmas to all my followers, readers and randomers. Thank you for taking the time out from all the madness, mayhem and materialism of the season and dropping by to read some poetry and inhale a frankincense, myrhh and golden breath of what the season is all about.

This was the moment when Before
turned into After, and the future's
uninvented timekeepers presented arms.

This was the moment when nothing
happened. Only dull peace
sprawled boringly over the earth.

This was the moment when even energetic Romans
could find nothing better to do
than counting heads in remote provinces.

And this was the moment
when a few farm workers and three
members of an obscure Persian sect
walked haphazard by starlight straight
into the kingdom of heaven.


Journey of the Magi - TS Eliot 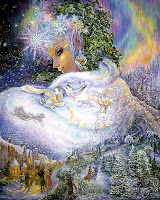 Many minute attentions, many knowledgeable watchers,
Much cold, much overbearing darkness.

Various long midwinter Glooms.
Various Solitary and Terrible stars.
Many Frosty Nights, many previously Unseen Sky-flowers.
Many people setting out (some of them kings) all clutching at stars.

Many visions, many digitally enhanced heavens,
All kinds of glistenings being gathered into telescopes:
Fireworks, gasworks, white-streaked works of Dusk,
Works of wonder and or water, snowflakes, stars of frost …

Many exile energies, many low-voiced followers,
Watchers of whisps of various glowing spindles,
Soothsayers, hunters in the High Country of the Zodiac,
Seafarers tossing, tied to a star…

Various people coming home (some of them kings). Various headlights.

Two or three children standing or sitting on the low wall.
Various winds, the Sea Wind, the sound-laden Winds of Evening
Blowing the stars towards them, bringing snow.