Word Up: Blocks, Jolts, and the Big Blue 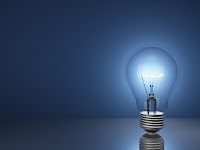 And now a sort of cheat post. I know I should be posting more regularly, but what's that they say about the best-laid plans and all....never work out do they? So here I go  - no plans, just some dive-in ad-libbing. Brought about by a finger-tapping frenzy to get writing something!!  (You got it - block is back -boo-hoo!)

The urge to write has been buzzing around me for days now, like an annoying turbo-powered blue bottle. But now finally I'm swatting it! Here's how:

Admitting the problem: I find that I seem to be doing what the bible of writing proclaims you should NEVER do: sit around waiting for inspiration. Well, not technically.  Not necessarily sitting, just waiting. Waiting for the right frame of mind to write, the right idea to burst into a bright bulb above my head, waiting for the right time.  And I know what they say: inspiration doesn't come to you, you've got to go out and chase it down with a club, writing is 1% inspiration and 99% perspiration and all that, but... I know, I know! (Knuckles rapped already.) But see here's the thing - 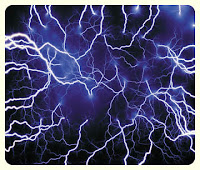 Knowing the cause: Ideas do come to me at the strangest times. Like the other night when I was washing my face, right there, in mid-splash, something hit me out of the blue (and I am so intrigued by this blue - where and what is it exactly? The blue-sky space I talked about before? Infinity's ink well? Imagination's unending ocean? Inspiration manifested in cerulean swirling electricity?) Well, there it was, a line, a bolt from the blue, and these bolts, I've come to recognise them as otherwordly. Creatively ethereal. And good. Exceptionally good. So good it's hard to equal them with long-staring ordinary labour at a computer screen, when each word comes at a sweat and a struggle. These 'floaters'  from somewhere in the Big Blue, are like a heaven-sent typescript. They can either open up a whole piece of work, be the missing piece of the puzzle that just makes the whole thing perfect, or a flash of an idea, an aha kickstart to a whole new writing project, be it poem or prose, feature or blog, or nicely-nuanced new notebook scribble.

Consequences: This is when block can set in (I have duly noted and experienced), like gangrene, eating away at imagination and all your best-laid plans and ideas. Your own words seem like stick-men scrawls now, useless gibberish, and the block, personified as a huge grey cloud-type monster, smothers you with its doubt and almost finishes you off.

Rescue: Until it happens again that is. Another little zing from the well. Another blue stab of inspiration, firing you up, setting your mind racing again with ideas. An electric resuscitation, just like in hospital ER rooms. Suddenly, asystole, back beating and breathing!

Ongoing Solution (Hurray!): But here. Let me share with you some kind of daily miracle-enhancer. A tool to administer this first-aid when there's no cosmic defibrillator around: www.oneword.com It's simple. You're given a word and a minute and you write. Block unexplainedly disappears in this kind of pulse-thumping setting. You write for the buzz of it, the electricity flowing back into your fingers. I don't know why or how exactly, but it really does work!

And now, in a 'heres-some-I-made earlier' gesture, here's some one word renditions I made earlier. In times of great blank block I might add, a saving proof of ability.  Infact, just a few moments ago, I was sober-stoned-silent, my mind a mute blank , words a sanskrit I couldn't read. Now, one one word, later, I'm back in blog business! It's a key I tell you, a key that unlocks all those shut doors.

So next time you find yourself staring at a blank screen, a blank page and whiling away the minutes with worry and doubt - get active word-wise instead and slay that beast of block. Go to one-word and write, for fun, for a kick-start, for an electric blue jolt.

(Now, to put this damn buzzing blue-bottle out; no metaphor intended, this is real! This bedamned blue-bottle gave me my metaphor at the beginning, but the stupid thing keeps flying against the glass of the window now, unable to get out (in the words of Emily Dickinson - 'with blue, uncertain, stumbling Buzz')  I feel kind of sorry for it - myself well-acquainted with this kind of action against  brick walls. Not anymore though, well for the time being, anyway. To  freewriting and the infinity of beyond!)

'Suppose'
Suppose I knew you. And you knew me. A pursed lip wondering, a surmising. Brain blowing bubbles of maybes that burst leaving water-stains of tears. Suppose that we’d met before now. Long ago. BC: before complications. Suppose love was easy. Suppose that love is easy. Suppose that we admitted this. I blow a pink chewing-gum bubble and it bursts. You daydream a bright bulb idea and it breaks. Suppose we stop supposing and try it out.

'Crouch'
Crouching tiger, hidden dragon. Crouching is not hiding; it’s waiting, whiling time, waiting to pounce on the right moment, the right possibility, the right prey. It’s a comfortable and crafty patience. Muscles bent ready to spring into action. Crouching is being ready.