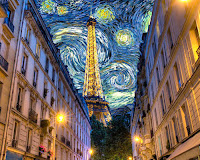 What a perfect way to spend a Sunday night.... humming along to whimsical French violin notes and swooning thoughts of Paris, á la 'Midnight in Paris', the new Woody Allen movie, which is utterly and deliciously delightful.

Paris, I love. Je t'aime, je t'aime, je t'adore. And this movie is yet another love letter to the city from the kooky director, but also a swansong to art and its 1920s heyday in Paris, when the city was a mecca for all the great artists and writers and musicians, the creative thrumming hub of the world.

'Midnight in Paris' is a quirky, comical and magical tale, almost bordering on the fairytale-esque.  The main character is Gil (Owen Wilson), a Hollywood screenwriter/wannabe novelist who is holidaying in Paris with his incompatible girlfriend. He is a nostalgic romantic who hankers back to periods like the 1920s when the golden age of Paris was in full swing. And  so, his nostalgia is indulged at midnight every night when he is transported back to the 1920s and gets to rub shoulders with the likes of Hemingway and Gertrude Stein and Picasso, just like that. See, Paris is magic - winks the underlying theme, and anything can happen here, especially at night. In the realm of Paris, every dream and dreamer is embraced.

I'm not usually dying about Owen Wilson in films, but here he does an excellent job of an unassuming, stuttering, unsure-of-himself writer. Especially when he comes face-to-face with Hemingway and F.Scott Fitzgerald and the likes! And giving his manuscript to Gertrude Stein to read, ha, priceless! He is endearingly comic. One funny moment is when he pays hommage to the French practice of mistresses, telling tour guide Carla Bruni, that the French are more highly 'evolved' than Americans when it comes to this taboo of love and romance. The encounter with Salvador Dali in a café with his comparison of Gil to a rhinocerous was crazily accurate and funny. And I can't help but be impressed with Gil's earnest love for the city and openness to the inspiration it offers.

And what really struck me about the time period was how easy it was to declare yourself a writer or an artist. You were welcomed with open arms into the burgeoning community indeed as Gil was. Paris was (and is) unique as a community for the arts; it revelled in art, embraced it, was committed to the pursuit of it, valued art above all other things. Art and everything that went with it: love and passion, truth and freedom and living life to the full, the essence of la joie de vivre.

Artists and writers were the celebrities of the day in 1920s Paris, not seeking fame, but excellence in their own genre. Take Hemingway for example. He is portrayed in the movie true-to-form as an extremely intense and devoted writer. One piece of advice he doles out to Gil goes along the lines of not letting other writers read your work, because they'll hate it if it's bad, and they'll hate it even worse if it's better than their own. Writers are competitive. Point taken like a bullet! 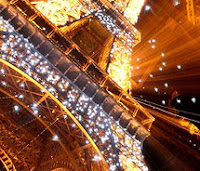 Paris of course, is the film's main star, spinning scenes into  wonder-filled whimsy. What the film does is capture that 'je ne sais quoi' element of Paris that is so hard to describe in words. The opening montage offers a luxuriously long take of Paris in all its glimpses: Eiffel tower with trees in foreground, sidewalk cafes with red brassieres, and black-tie waiters, cobblestones, rain lashing on streets, the lanterns, the steps of Montmartre, the many bridges,  the magnolia banks of the Seine, the Eiffel tower with twinkling lights at night.

One of my favourite moments in the film is when Gil tries to describe the allure of Paris - how the fact of its very existence makes him happy, that everywhere in it is somehow a piece of art, a scene and a story, a poem and a painting. (See clip below).  And it's not as if he's star-struck, it's real, this love and awe for Paris. It gets in the heart like no other city, no other place. Especially if you're a creative person, and for most it's love at first sight, first visit, first postcard reverie, first black-and-white picture, first midnight musing.

At the beginning of the film, Gil dreams of living in Paris, which is deemed a 'fantasy' by his oh-so-down-to-earth-and-practical girlfriend, but becomes a reality at the end by way of magic and mischief and musing, and a realisation that although there are some people who live in reality and some people who live in dreams, there are also some people who turn one into another, and in Paris, this is exactly the thing to do. And art, art is a catalyst in this change. As Gertrude Stein comments to Gil who is beginning to despair about his 'perplexing' situation and the rewriting of his novel - 'artists don't despair, their purpose is to find the antidote to the emptiness of existence.' And this is what Gil is in the pursuit of and does, and what Woody Allen has done with this film.

And you would think it, but 'Midnight in Paris' doesn't require a suspension of disbelief, it was in its own right, believable. As well as being heartwarmingly humorous, endearing and witty, this offbeat and upbeat film will delight and inspire too. When the clock strikes midnight, who knows where you'll end up (in your head of course, but better still, in your heart....and what better place to be than in Paris???)

*And if you like this movie and the 1920s era - you'll love Ernest Hemingway's memoir of the time in his book  'A Moveable Feast.'