Who hasn't been taken with the moon at some stage in their lives? From the fanfare of the moon landing or the wide-eyed glory of a full moon, the romance of moonlight or the link to lunacy, its emotional significance in astrology, the moon plays a part in all our lives.

But to artists, it's inspiration. When there's a full moon in the sky, it's like a crystal ball of inspiration gleaming, and our pens are ready for plucking, as Yeats remarked, 'the silver apples of the moon.' Maybe its because our intuition is at a peak and so we're more able to attune to insight. Whatever, the moon plays the role of creativity's advocate.

So, before September is over, I thought I'd write a bit on the harvest moon. (I know it's already passed and I've missed it - damn - but anyway...) For those of you who don't follow moon lore, the harvest moon is the full moon closest to the autumnal equinox, which means it usually occurs before or after September 21st. You can't miss a harvest moon - a huge golden full moon, low in the sky, so close it seems to be sitting on the horizon.

The harvest moon is my favourite moon. One worth waiting and watching for.  I'm especially taken with the whole lore of it. I've always thought there was something special to the harvest moon: the time of reaping and sowing, September's scythe moving us on through the fields of life, letting the old stuff fall away, while embracing the new, the simultaneous contradictory acceptance of regret and rebirth, and all its connotations with seasons and the cyclical nature of life. To me, the harvest moon represents change, the pale gold light of it a new currency, a horizon harbinger, the quiet shimmering significance of autumn transition.

I'll never forget the first time I saw a harvest moon in the sky - it was absolutely HUGE! Like a magnified moon.  Hanging just above the hills, yellow-gold in colour and so close. I remember holding a palm up to the car window and having it dwarved in comparison. And I was so full of regret at the time, I felt it all related somehow to this huge moon in the sky. We were right in the transition period, mid-September, when life begins again, when moving on is a natural occurence, and I couldn't move on from one particular thing, and this moon suddenly put it all in luminous perspective.

So anyway, I wrote a poem about it. About the whole reap and sow, sow and reap aspects of it.  I couldn't but, it was so damn strange and extraordinary and hung in my mind for months later until I did. (Well actually I wrote a few poems, a repetitive villainelle proving a handy form for the subject matter.) One of which I've included (ta-dah) here: 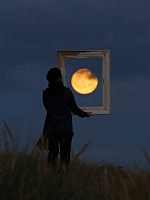 Last time I was supposed to see you and didn't -
there was a looming harvest moon in the sky, scythe
bent low to sweep the barren fields of my soul,
what I didn't reap, what I didn't sow.

Blinding, bright, like an optic nerve of sky, searing
nucleus of Fate and mirrorball of revelation,
mirage of maybes and white-washed whimsy,
illuminating all that was dark before.

So promising - a luminous wafer, haloed horizon,
orb of pale gold possibility, pearl of potential,
lucky penny wish found and framed in sky,
harvest, of what a heart could have at full loom.

Or so obvious. Your lit-up face, that wounded wide-eyed stare;
full moon a magnifying glass on my half-heart haunted
from moments missed and memories shadowed
by the looming lunar ghost of what might have been.