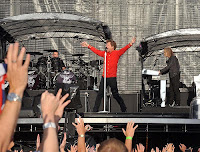 Passion. Where would we be exactly without passion? Well, without Art for one. Without music.  Without la joie de vivre. Without a pulse, metaphorically at least. If passion were a colour what would it be? Red. Red, red and more red.  If it were an image what would it be? A kaleidoscope of red roses? A red flag waving?  And if it were a sound? Well, that's easy: music of course. Loud, proud and pounding rock'n'roll to be exact.

Music is the most obvious and all-encompassing place where passion lives. 'In music the passions enjoy themselves' Nietzsche remarked. Its foundations are built in passion; its creation; its performance; its intentions and its effects. Every song a musician records is a piece of their passion moulded and melted into music to transfer to us, so that we too may recognise this quintessential ingredient of living. Music provides the pulse to our lives, its rhythmic discourse. It gives life a tune and in turn, tunes us in to life. Music is the one thing in this world most people go crazy over. The devotional term 'fans' relates primarily to music fans, die-hard groupies who crave music like hardcore junkies.

You see, I've just had my first taste of some summer music and I'm still on a soaring chorus-high!  Now, I won't attempt to review them, (I'm not a snotty music critic flaunting the language of haughty-taughtyism) but I will try to describe the atmosphere (as I am most certainly a fan).

First of all, watching U2 at Glastonbury last week (on tv merely) but the atmosphere was  so contagious it crossed the border of tv screen to the ears and heart easily. (Despite what the critics had to say about it.  It is their job to criticise after all, not praise. Pah. Besides, music should be reviewed by the heart and not the head, but sadly criticism demands only the latter. ) All of U2's songs have a core of passion, beginning in quiet and contemplative lyrics  before rising to chorus crescendoes of longing and surrender and full-pour-your-heart-out rock. Anway, this was a raw, real and stripped down performance by U2. Highlights for me included 'With or Without You,' their enduring cut-to-the-bone love song that is as sharply true as a knife-edge; the wonderful blue-sky enthusiasm and green vivacity of 'A Beautiful Day'; the high hope and invincible resolve of new beginnings in 'Where the Streets Have no Name'; and lastly a quiet zen-like reflection and acceptance in 'A Moment of Surrender.' 'Nothing moves us like music', it's been said, and it's hard not be moved while listening to U2 (even if Bono's swagger does get on your nerves...) If music can channel passion like this, then it must exist. Within and without. This set by U2 was a truly glorious goosebump-inducing one that would inject lust-for-life into any lacklustre soul. Check out a clip here: http://www.youtube.com/watch?v=ml3Z0wSZVaw 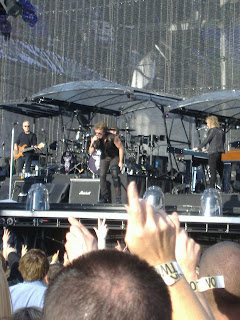 Second, a stadium concert I was at in the RDS Thursday last by Bon Jovi, the legendary US rockers who haven't faded into obscurity with the decades change in music styles, but steadily survived with their strong brand of radio-friendly rock. Standing in a stadium of thousands of people clapping and stomping in sync to their loud airborne rock'n'roll - the beat so much fleshier live - ricocheting through every body there like an en masse heartbeat, I have to say was a truly passionate and memorable experience. Is there anything better really than listening to rock'n'roll on a sunny blue-sky evening, feeling the pounding beats course through every pore, and nothing, nothing to do, only enjoy the music, submerge your self into it until you're a part of it, and the crowd a part of you, and join in rejoicing at the altar of sing-along anthems and kick-ass guitar riffs, pumping choruses, chanting lyrics that are suddenly the testament and truth of living? Ahh, no I think not...

Mass sing-alongs are a hallmark of any good gig (and a by-product of a charismatic frontman; the energy and enthusiasm of Jon Bon Jovi spread to the crowd from the minute he walked on stage, decked out all in black with complimentary rock-star shades and a 'let's rock' attitude, the gruelling tour schedulue clearly not an obstacle to much high-powered arm-raising and running-around.) And this gig had many.  From the loud and independence proclamative 'It's My Life' with the infamous line 'like Frankie said, I did it my way...'; to the feisty '90s foot-stomping riposte in the face of society's woes 'Keep the Faith' where the screen temporarily lights up with digital pyrotechnics (my personal highlight with the irrestible beat channeled by the signature maracas); to the glorious country-twanged 'Blaze of Glory', title self-explanatory when it comes to killer guitar riffs; to the overwhelming collective crowd singing of the 'together-forevers' in a surprise acoustic rendition of 'Never Say Goodbye';  right through to the encore of the band's classic anthem 'Living on a Prayer', the incomparable 'Always'  and the electro-backed dreamy new tune 'Love's the Only Rule' with black and white and red visuals a backdrop to the heartfelt sentiments, this band of veteran rockers had the whole stadium on their feet singing every word, as ingrained as any religion, clapping and waving their hands fervently as a show of support the entire night. (Phew...! Major long sentence, please excuse!)

While Irish audiences are known to sing the most and the loudest, the band still seemed stunned at the participation, with Jon Bon Jovi frequently looking awed (and humbled) on several occasions, most especially when the crowd carried on the fade-out 'whoa-oh-ohs' of 'I'll Be There For You' long after the song had finished, and when the last chords of the final song reverberated around the stadium delaying the band's departure from the stage and forcing a clearly endeared JBJ to join in on the insistent humming. Oh, and in what had to be one of the highlights of the night, we took over the singing in  'Wanted Dead or Alive' - the rebel/cowboy/free-spirit themed-song, regarded as the band's best, all plucked guitar strings and triumphant hand-in-the-air choruses - so much so that Jon Bon Jovi took a backseat on the vocals, too surprised and delighted at the reaction to interrupt (pictured, official photo from www.facebook.com/BonJovi). Yep, we Irish can sing. Is there anyone in the country who doesn't know the lyrics to a Bon Jovi song tell me??  Everyone was singing - old, middle-aged and teenager, men and women, hardcore and casual fan alike, from the old '80s tunes right through to the new ones. Maybe that's why Bon Jovi are the 2nd-highest grossing band in the world when it comes to concerts (behind only U2 incidentally). 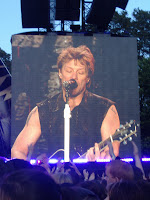 I remember listening to Bon Jovi circa 12 years of age on a brick-like Sony walkman, remember their dodgy hair and leather and a faded-jean wearing Jon, complete with bandana, Superman tattoo and earnest lyrics, but mostly, I remember the passion in the music, namely  -Always, Bed of Roses, Blaze of Glory, Keep the Faith. (Anyone remember that TOTP performance of Always against a Niagara Falls background? I defy you to find a more intense performance - setting-wise at least!) Over 20 years in the music industry, and how they still have it. Amazing watching  49-year-old frontman Jon Bon Jovi - still as dashing as ever - dance and frolick around the stage for 3 full hours, interacting with the crowd not as  some glorified rockstar with his fans, but more as old buddies meeting up, kicking back and listening to some tunes, any tiredness a mere tedious triviality to the astounding basking glory of the music he's making and sharing (with an injured strapped-up knee too no less). I'm ashamed to admit I'd never been to a Bon Jovi concert before (they slipped off my radar in school...kicking myself now though - they were never completely gone - Blaze of Glory chords are tattooed in my heart!) and it kept occuring to me throughout that 'I'm at a Bon Jovi concert', I should be feeling...star-struck. But I couldn't seem to I was instead... song-struck. First and foremost, this concert was about real music performed with real feeling.  No fancy stage-show special-effects, no theatrics, no bullshit. Just straight-up music-making and all the better for it. From sky-blue to midnight blue (and black-clad band members and beats in between), the crowd at the RDS last Thursday enjoyed several hours of rockin' music before going home and making their way back to 'the real world,' as JBJ called it, but also advised us to '"try and loosen things up for a couple of nights", like we all, band included, had done tonight. And maybe it was the euphoria of the encore - Living on a Prayer, Always, Love's the Only Rule - or the band's genuine thanks and appreciation, the deep blue summer night sky, or the still-lingering sweat and enthusiasm, but I think everyone did go off carrying something of the night with them: the escapism and hyper-realism that music simultaneously is, and the drumbeats of passion it can kick off in our routine-quieted souls.

So thanks to Bon Jovi for some classic rocking out! They definitely still have it, much to critics chagrin, who have thrown abuse at them for years. But they carry on, regardless. They're resilient, genuine, appreciative of their fame and fans, and proud of their music. And  they left us with a tasting of true raise-your-hands rock'n'roll lust-for-life, in other words - the passion that is the experience of a live gig by a great artist with great songs (painting some more red onto a black-and-white background wahey!)

Oh, and  a 10/10 on my personal gig-o-meter - came home sweating and hoarse, and the songs are still playing in a blaze of glory in my head a week later! I'll leave you with a word from the man himself - 'Nothing is as important as passion. No matter what you want to do with your life, be passionate.' - Jon Bon Jovi.  Said with the appropriate rockstar cool and gusto. Yeahhh!

(photos & videos my own, except where otherwise stated. Enjoy.)