The Boo in Books: Storytelling Magic

Last night I attended a stage production of one of my favourite seasonal reads, Bram Stoker's Dracula, in the form of Jonathan Harker & Dracula, an one man tour-de-force re-enactment of the classic novel.

I was a little skeptical as to how it would play out  - but no need - the performance was absolutely magnificent, spellbinding even. Better than I ever expected. Because it revolved mainly on the magic premise of authentic, dramatic, impassioned storytelling.

The stage itself was sparse - the only props a red velvet chair and chaise lounge which would double as coffins and carriages, ships and horses when needed. But it didn't matter. The performance was more than enlivened by the background screens and sounds setting the scenes - from wolves howling under moonlight to the shadowy interior of Dracula's castle, an insane asylum cell, a ship at sea and the rocky outcrops of Transylvania. Each of the many characters that people Stoker's novel were brought to life by actor Gerard McCarthy so astutely with just the basic aid of lighting and accents, that there was no need for costume changes or other actors. Although the production was minimal, the execution was brilliant.

The audience's disbelief was well suspended from the first few minutes when Harker's coach traverses across Transylvania: a land of darkness, howling wolves, superstitious villagers and mysterious coachmen. And from there, the imagination constructed the world of the narrative being told us. We were in the story from the get-go and reluctant to leave it at the interval at which I overheard someone remark: 'I'm a nervous wreck!' -  a testament to the story's (and our storyteller's) captivating power. 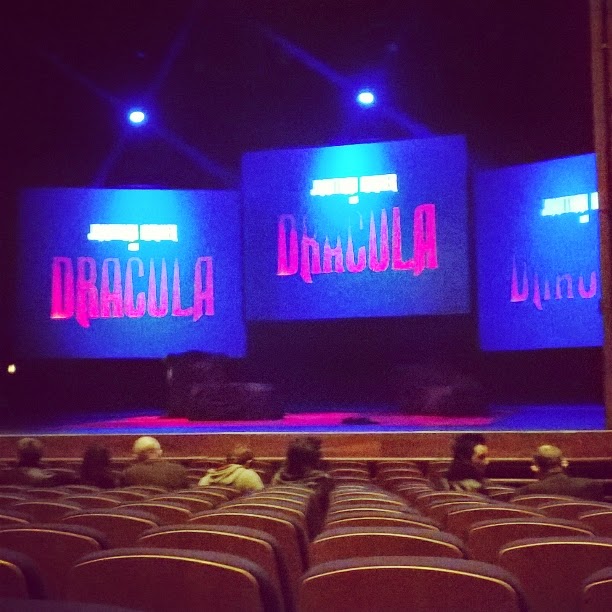 The whole performance, which stayed true to the book entirely (a welcome first for a Stoker adaptation) was a triumph. It just goes to show you the power of a good story and a good storyteller. I found myself thinking throughout, if this were a film we were watching, would it be as good? As believable? As atmospheric? As completely absorbing? No way. With movies, there is always a distancing disbelief. A look away from the screen and we know we're in fantasy land. From the moments the credits and score roll we know we are being ushered into make-believe land. But not so with storytelling. It is far more immediate and dramatically direct. Its roots in our culture are too powerful I suppose to dismiss it as mere entertainment. It mimics reality too well. There are truths within storytelling that may prove unfathomable in another medium, but not in spoken word form. It has a special power to hook us.

Stoker's classic gothic tale in all its spookiness in this performance, had taken on new life; or rather come newly to life. I loved every minute of it and even though I knew the plot well and always what was going to happen next, I was in a state of tense suspense the whole way through. There was no straying from the fixation it had - no one left the theatre for a bathroom break during the performance, no one spoke or fidgeted or ate or drank or even moved (now, what movie can claim those feats?). There was one point midway through that I became aware of the suspended state we were in - the simple act of telling a story had submerged us in it. Magic. Like Dracula's victims, we were entranced, unable to look away. 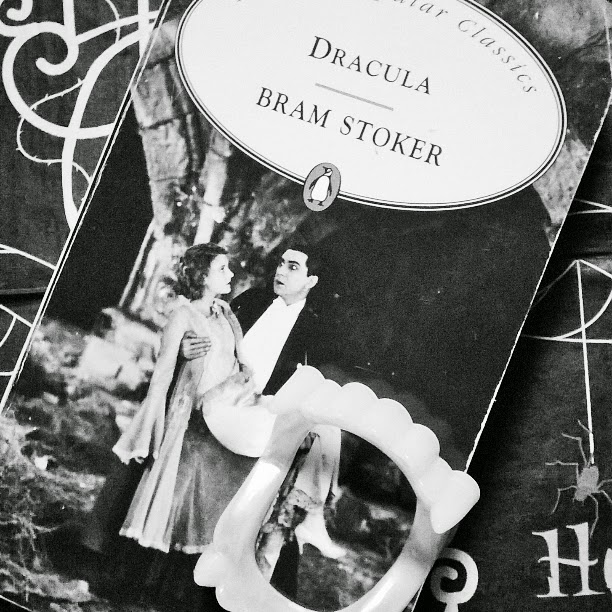 Dracula itself, the novel, to many, is an outdated Victorian yarn by now, not in the least scary what with all those gory vampiric entities filling up our minds today. But I beg to differ. The horror movie genre relies on shock tactics, on visceral reactions to graphic imagery and violence; the book genre relies more on a building-up of atmosphere, a creepiness that just can't be shaken a long time after reading. It is more affecting in that it is articulated in detail and is open to personal interpretation, which may be far worse than any movie director's. Dracula is one such example. Its creepiness and strangely 'Other' atmosphere is perfectly rendered, enough to rival any modern day piece. The atmosphere evoked at the beginning of the novel, while Jonathan Harker is traveling through a strange land to meet an even stranger person, effectively establishes the setting and feel of the novel:

"I struck a match and by its flame looked at my watch; it was within a few minutes of midnight. This gave me a sort of shock, for I suppose the general superstition about midnight was increased by my recent experiences. I waited with a sick feeling of suspense. Then a dog began to howl somewhere in a farmhouse far down the road - a long, agonized wailing, as if from fear. The sound was taken up by another dog, and then another and another, till, borne on the wind which now sighed softly through the Pass, a wild howling began, which seemed to come from all over the country, as far as the imagination could grasp it through the gloom of the night..."

Maybe the creepiest passage in the whole book follows shortly after when Harker, kept against his will in Dracula's castle for a few days, beholds a very strange incident when gazing out his window at night:
"What I saw was the Count's head coming out from the window. I did not see the face, but I knew the man by the neck and movement of his back and arms. In any case, I could not mistake the hands which I had so many opportunities of studying. I was at first interested and somewhat amused, for it is wonderful how small a matter will interest and amuse a man when he is a prisoner. But my very feelings changed to repulsion and terror when I saw the whole man slowly emerge from the window and begin to crawl down the castle wall over that dreadful abyss, face down, with his cloak spreading out around him like great wings. At first I could not believe my eyes. I thought it was some trick of the moonlight, some weird effect of shadow; but I kept looking, and it could be no delusion. I saw the fingers and toes grasp the corners of the stones, worn clear of the mortar by the stress of years, and by thus using every projection and inequality move downwards with considerable speed, just as a lizard moves along a wall..."

Of course this scene could be rendered by special effects in a film, but runs the risk of appearing silly or ridiculous. But in the book, where everything is taken at face value, where we rely on the narrator (and in this novel, most especially so, since Harker's voice is one of fact and logic, the epistolary structure reinforcing this) the scene comes as a shock, in its otherness and juxtaposition with reality. I don't know about you but it sends a shiver up my spine everytime I read it. And to hear and watch it re-enacted, added a whole new level of creepy. There was no background image for shock effect, just the word themselves carried by an utterly disgusted and fearful Harker were enough to conjure the grotesque feeling this induces. (That's another thing about the performance - Jonathan Harker became more of a presence. We thought more of him as a real person and not just our narrator; in the book he was our eyes and ears, here he was our heart and our hope, our vital link to the familiar.)

The fact that Count Dracula is not present for the whole middle of the book, lurking in the background as a shadow, literally (and bats, storms and moonlight), mentioned in references and appearing in brief cameo moments recited in letters and diaries - ratchets up the fear factor considerably. We are left to imagine his comings-and-goings and jumpily await an inevitable confrontation.  There is no gore in this book, no gratuitous violence, no jump-out boo moments, but the creepy atmosphere is relentless, set mainly at night and wandering in and out of reality and dreams and different character's accounts.  It all makes for a kind of surreal effect, where the storyteller has whisked us into his world expertly. The letters and diary extracts in the novel give the illusion of reality, helping to create a very believable world. At the end of the show last night, a surprising added fictional extra provided the final slice of reality biting: a letter from Jonathan Harker to Bram Stoker telling his story, hinting that the novel was composed on the basis of this correspondence. For a moment, I could nearly have believed it, ha!

When I was younger, for Halloween enjoyment, myself, my sister and cousin used to scare ourselves by reading horror tales aloud in candlelight. (Reading them ourselves, wasn't near as atmospheric.) There was something about the words on the page being spoken, incantations almost, that brought them more to life, and the goosebumps to our skin. Edgar Allan Poe's 'The Tell-Tale Heart' was a frequent favourite, the tense atmosphere bubbling to boiling point when read aloud. I can still, to this day, remember the chills. Perhaps storytelling is a kind of spell then, for there is magic in the result. 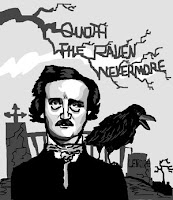 Another gothic staple that never gets old of course is Edgar Allan Poe's narrative poem 'The Raven'. Now this gloomy piece of gothic grandeur translated to film would never work, but read aloud is quite the spine-tingler. The language, the rhyme and the rhythm all work together to create the mournful beguiling atmosphere. I found a version read by Christopher Lee (posted below) which is perfectly goosebump-inducing. The background music too highlights the dramatic darkness of the scene and eeriness of the setting. Do give it a listen - preferably in a darkened setting. It's the next best thing to Bram Stoker I think.

Spooky Reads: Scary or Not?
Vampires 101