Did you know that yesterday was Global Tiger Day? A day designated as of a few years ago to raise awareness for tiger conservation. Sadly, their numbers are dwindling and they are close to the verge of extinction.

Tigers are magnificent animals aren't they? The most admired of all the big cats, they hold a mesmeric fascination for many people, myself included. There's something so mysterious about them, beautiful, intense, and fearsome. They are animals of myth, of metaphor, of meaning, animals of life and death, of great beauty and simultaneously, great terror.

And where can we experience these animals in more detail? Why, literature of course. Nature documentaries tell us the facts about tigers; literature, the myths. Tigers often feature in fiction, majestic in their metaphorical appeal. From Shere Khan in Kipling's classic 'The Jungle Book', to modern day Richard Parker, the shipwrecked tiger in 'Life of Pi', tigers are an intriguing addition to narratives. What I want to do here is mention a few books and poems that I found particularly memorable.

Tigers in Red Weather - Ruth Padel
"Whatever artist dreamed up the tiger face exaggerated the eyes. White butterfly patches wing up like higher, bigger eyes above surprisingly small real ones of ochre. Black hierogliphics in these patches vary from tiger to tiger. Over his right eye is a blurry black triangle with three crescent moons above. Over the left a worm of black flame."

First off, it's poet's Ruth Padel's brilliant part travelogue, part poetic reflection on notes from her journey/quest to Asia to understand more about tigers. The book chronicles the history of tigers in their diverse habitats, ranging from their symbolic importance to cultural influence.  This unique book offers a detailed analysis of the tiger, in its rapidly changing habitat, in culture, in literature and what is most arresting, in the author's own personal life. The chapters are interwoven with a personal narrative arc in which Padel explores her own fascination with tigers and the wild in the light of a bitter break-up. The book strives to answer - explore rather -  the question of why tigers fascinate us, and what this fascination means. It is a book like no other; genre-defying and filled with passion and poetry.  To read it is to delve into the world of tigers: to wade knee-deep in Asian forests, in staggering conservation facts and figures, in fantastic myths and legends (did you know that some Eastern religions revere the tiger as a god?), into the fecund poetry of the wild, and in the process, of the heart.

“In my earliest memory, my grandfather is bald as a stone and he takes me to see the tigers.”
This book by debut young author Tea Obreht uses the symbol of a tiger in a most compelling manner.  The novel is set in a Balkan country of modern day, and the story is one about death, in a world marked by old legends and war wounds, love and loss. The tiger appears in the story as a sign of power, of strength, befriending the abused wife of a brutal butcher, the seeming key part in the complex riddle of the plot. It's up to us to interpret it, but what the tiger means is never obvious, it is always changing, like a mirage or a myth from the moment it appears in the novel - escaping from a bombed zoo to lurk in the background of the story, only to appear in crucial moments and hasten the climax of this confusing, yet affecting story.

Life of Pi - Yann Martel  "Richard Parker rose unsteadily to his feet on the tarpaulin, eyes blazing as they met mine, ears laid tight to this head, all weapons drawn. His head was the size and colour of the lifebuoy, with teeth."Perhaps the most famous and favourite animal in fiction is Richard Parker, the 400lb Bengal tiger that ends up in a lifeboat with sole survivor Pi in this magical realist tale from Yann Martel. The book's original spark revolves on the presence of this character and unlike other fictions that feature tigers, this tiger is a mainstay in the story, not fleeting or lurking, but in the main stage of the lifeboat for two thirds of the novel, up front and scarily personal! Richard Parker is not just a plot device but a fierce frightening character that keeps the pages turning and the suspense wire-tight. If you want to experience a tiger in close-up quarters, read this. And if you want to read a swashbuckling adventure tale with a spiritual centre, read this. And if you want to read a really good book, read this!

In poetry, I suppose William Blake's 'The Tyger' (above) is the most well-known poem about tigers, the image of the animal with its 'fearful symmetry' 'burning bright' in the poem a suggestion of the fearful presence and allure of evil. But, I want to turn your attention to some other poems. (You can read  the typescript of 'The Tyger' on my Poem a Day blog today.)The first one by Ruth Padel, 'Tiger Drinking at Forest Pool' is the end result of  her tiger quest, and is found as a preface to 'Tigers in Red Weather'. It is both dramatic and beautiful, just like the animal itself, offering flitting glimpses of the tiger, and in these images, everything it represents. The poem fittingly captures the essence of the tiger as described in her book: mysterious, majestic, mythic.

Tiger Drinking at Forest Pool - Ruth Padel Water,moonlight, danger, dream.                                                                                                      Bronze urn angled on a tree root: one Slash of light, then gone. A red moon Seen through clouds, or almost seen. Treasure found but lost, flitting betweenThe worlds of lost and found. An unjust lawRepealed, a wish come true, a lifelongSadness healed. Haven, in the mindTo anyone hurt by littleness. A prayerFor the moment, saved; treachery forgiven.Flame of the crackle-glaze tangle, amberReflected in grey milk-jade. An old songRemembered, long debt paid. A painting on silk, which may fade.    The second is a metaphysical classic from South American poet Borges, where the tiger begins as a symbol, but then is interrupted by the realisation of its real self, the 'deadly jewel' that stalks the forests in Bengal and Sumatra, as being superior to the one of thought. The poem presents a conflict between the imagiantion and reality, the mind's pursuits as opposed to the physical world, essentially the tension involved in writing - can we writers ever note down life as it truly is? It ends cryptically with the poet talking of the need to find a 'third' tiger, one that is neither symbolic or real, an elusive creature no doubt. 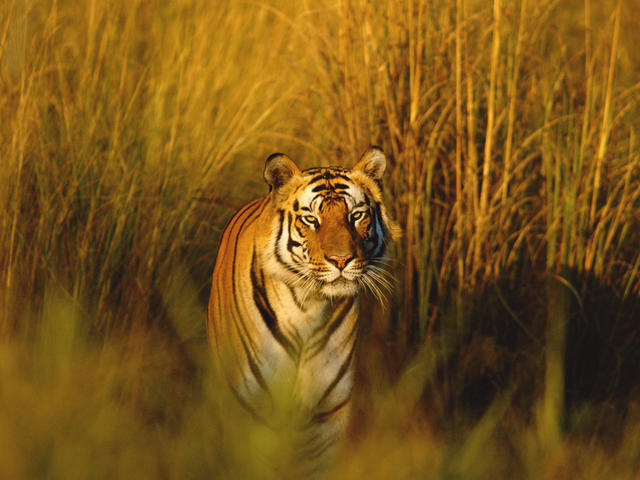 The Other Tiger - Jorge Luis Borges A tiger comes to mind. The twilight hereExalts the vast and busy Library
And seems to set the bookshelves back in gloom;
Innocent, ruthless, bloodstained, sleek
It wanders through its forest and its day
Printing a track along the muddy banks
Of sluggish streams whose names it does not know
(In its world there are no names or past
Or time to come, only the vivid now)
And makes its way across wild distances
Sniffing the braided labyrinth of smells
And in the wind picking the smell of dawn
And tantalizing scent of grazing deer;
Among the bamboo's slanting stripes I glimpse
The tiger's stripes and sense the bony frame
Under the splendid, quivering cover of skin.
Curving oceans and the planet's wastes keep us
Apart in vain; from here in a house far off
In South America I dream of you,
Track you, O tiger of the Ganges' banks.
It strikes me now as evening fills my soul
That the tiger addressed in my poem
Is a shadowy beast, a tiger of symbols
And scraps picked up at random out of books,
A string of labored tropes that have no life,
And not the fated tiger, the deadly jewel
That under sun or stars or changing moon
Goes on in Bengal or Sumatra fulfilling
Its rounds of love and indolence and death.
To the tiger of symbols I hold opposed
The one that's real, the one whose blood runs hot
As it cuts down a herd of buffaloes,
And that today, this August third, nineteen
Fifty-nine, throws its shadow on the grass;
But by the act of giving it a name,
By trying to fix the limits of its world,
It becomes a fiction not a living beast,
Not a tiger out roaming the wilds of earth.

We'll hunt for a third tiger now, but like
The others this one too will be a form
Of what I dream, a structure of words, and not
The flesh and one tiger that beyond all myths
Paces the earth. I know these things quite well,
Yet nonetheless some force keeps driving me
In this vague, unreasonable, and ancient quest,
And I go on pursuing through the hours

Another tiger, the beast not found in verse.  My last choice comes from Wallace Stevens, 'Disillusionment of Ten O' Clock.' In it is the phrase that became the title of Padel's book - 'tigers in red weather.' The association, from a mere mention, is of tigers with the wilder side of life. In the poem they seem to be motifs of the go-getting ambition and passion that lies within us all - that flip side of life that we all hunger after. 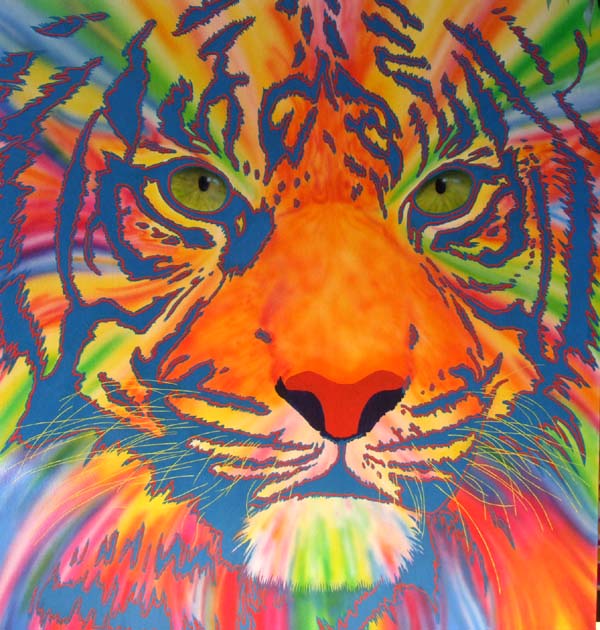 Disillusionment of Ten O' Clock - Wallace Stevens The houses are haunted
By white night-gowns.
None are green,
Or purple with green rings,
Or green with yellow rings,
Or yellow with blue rings.
None of them are strange,
With socks of lace
And beaded ceintures.
People are not going
To dream of baboons and periwinkles.
Only, here and there, an old sailor,
Drunk and asleep in his boots,
Catches Tigers

In red weather.   It's clear that the tiger is an animal that appeals to all and yet can mean so many different things. What do tigers represent to you? To me it's a fierce kind of freedom, a fearlessness, a wild ultimatum to live, a vibrancy of being alive, a certainty of spirit, a ferocious resolve.  In Life of Pi at one point, with the seas and skies swirling around him, everything in monocolour, Pi notes how his eye and resolve is drawn to the colour of Richard Parker - the same colour as the lifeboat, a vibrant colour of life, of survival, of wanting and fighting to live. There's also that 'fearful symmetry' to tigers that Blake talked of. Padel describes in her book a moment of looking at a tiger's face up close - how excruciatingly terrifying it is, like looking at a 'death mask.' Tigers are intriguingly both beautiful and terrible, a thing of vibrant life and violent death, powerful, yet now, in our modern world, vulnerable. But their power is such that they can mean many things - metaphors, motifs, symbols, allegories.  Do you have the 'eye of the tiger'? Can you unleash the 'tiger inside'? Modern life is filled with such references. As is literature. But sadly, the forests of the world are emptying with tigers.  The 'painting on silk' which Padel's describes,  is beginning to fade. You can read more on tigers plight here: WWF Tiger Day.  ~Siobhán