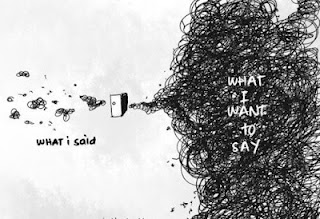 It's fair to say that there's a lot of difference between the spoken word and the written word. A colossal difference in fact.

Speech - chatting, talking, gabbing, yapping, nattering - just doesn't measure up to writing for me. Is this every writer's perspective I wonder? For me, writing is true and exciting and exhilarating and revelatory. And speech I'm increasingly finding, is tiring, predictable,  draining and bland.

Maybe it's been my experience of late. Cul-de-sac conversations that are flat and featureless with phrases worn to rags and been-there-said-that fillers. One size fits all conversation caper, talking by ticking the usual boxes. Why can't people glitz up their conversations? Say something different. Add a bit of crackle and dare. Or better still, some truth. Some hint of identity and personality. Some original thought.

No, rather it's like most people stick to a script, a safe tried-and-tested small-talk script so that they'll never veer off into the dangerous territory of insights and personal revelation and unforeseen topics.

Language to a lot of people, is a means of concealment rather than communication. To me, it's a means of expression. What you say, what you write, tells so much about who you are. But when expression is stifled for socially befitting fill-the-silence drawl, it loses this aspect and falls into the category of perfunctory and redundant.

For example, a quintessentially Irish thing to do is talk about the weather. It suffices instead of a genuine greeting. Weather talk takes the place of 'hi, how are you?' - instead we have  'lovely day isn't it' or 'that's a nice day' or 'what a horrible day.' I don't know about you - but I'm much more interested in the emotional meaningful fronts you may be personally experiencing today, not the irrelevant meteorological ones.

Social conversations are the worst. People are so busy trying to stick to the normal verbal code of conduct, they have started to sound like clones. Individual sentiments are silenced for the louder collective phrases of the crowd, the area, the social situation. No true sentences uttered anywhere. No exclaiming of truths. No expressing of emotion. Just in the words of Yeats - 'polite meaningless words.'

Maybe that's why writing exists as a foil to the downfalls of speech. It's a space where you can fully express yourself, without any social trappings or expectations.

Like in the caption above, when I'm speaking I only say a fraction of what I really want to say. For every word I utter, there are hundreds more squabbling behind it. And mostly, what I say, it comes out wrong or warped or a weak, watered-down version of how I would write it! I can explain what I want to say so much more easily in writing than the muddily fuzzy speech bubbly compendium.

And usually, when we're talking to someone, we subconsciously match our speaking style to theirs - their general vocab and colloquialisms - and let our own individual voice stay silent in response to this aspect of social conditioning. This does not happen in writing. In writing each to their own; in speaking, each must match the other. Because if there's two different modes of speech going on, effective communication just ain't going to happen. A case of - 'talk to the hand cause the face ain't listening' - because  'you just don't speak my language do you?' (And I'm not even going to start on the fact that so many conversations these days are made up of monopolising me-me-me monologues!)


I'm sure you're all familiar with  l'esprit de l'escalier - the French term which refers to that stinging sense of realization of the perfect remark you should have said at a time prior -  that classic comeback to a conversation long over. It literally translates to the 'spirit of the stairs' - the feeling of regret that strikes when you're leaving the place of conversation and realise what you should have said. This is a given with most conversations. More often than not, we never say exactly what we want to say. We hold back; we hesitate; we prefer the safety fillers of small talk, rather than the raw acoustics of real communication and so, end up empty and drained and worse yet, further compromised on our ability to forge a real connection with another. Whereas in writing, there is no l'esprit de l'escalier; the inking process is all-encompassing, there is no leaving out of anything. There is only hardcore truth and a real hand-on-heart communicating.

If only there was a way to reconcile these two mediums? To ditch the small talk and go for the big talk. The real stuff. The stuff that makes us tick. The truth of who we are. If only we all could open the books of ourselves and display the wonderful font and language we contain. Instead of settling for blether and blabber and polite meaningless chit-chat! And choose to express, not repress ourselves. To talk up and over and outside of the box and in all kinds of shapes and sizes and squiggles and scribbles and spontaneous gushing in deference of our individual, colourful selves. Burst our allotted speech bubbles and say what we want, when we want, and whatever way we want - regardless! 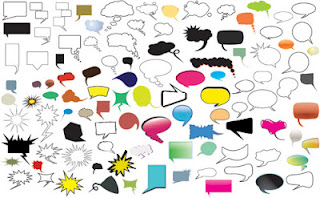