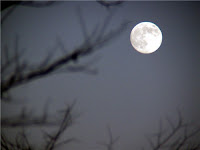 November is usually such  a dark month, the real 'bleak mid-winter' if you ask me. But as I write this I am contradicted by the gorgeous maple-golden sunshine outside and the cool blue sky nights this past week, owing to the bright frosty moon in the sky.

Tonight will see the first full moon of November, the 'frosty moon' as it's known.  Apparently it gets its name from northern autumnal ground frost (- thanks Áine!) And you can literally see why its name is so fitting: the white frost-like brightness of it. I think it's the whitest brightest moon I've ever seen. And it's so high in the sky. All other full moons I can recall are usually lower. This moon is at a faraway slant, a contracted pupil staring down at us, a beady ball in the sky so circular and small it reminds me of the exact small circle of a contact lens everytime I look up at it.

I really wanted to take a picture of it to post here, but unfortunately couldn't for several reasons: a/have a crappy camera b/don't have a lead to connect crappy camera with computer and c/I'm not a great picture-taker. So I had to do with a googled image instead (hmpf!) But, if any of you out there caught it, oh, I'd be so over-the-moon (ha) to see your attempts! But if you want to see some great photographs of it, check out Flickr. For now, I'll have to let words paint the picture.

What's great about this moon is the colours it lavishes upon the winter sky. Come 5 o' clock, the sky turns a clear ice blue with some pink blushes on the horizon. Later it's pure Arctic blue with the pink slipping into hazy lilac tones of twilight. It reminds me of those white snowy days and spider-web frost tendrils and the Northern Lights and all those great magical things about winter.

Did you know that all the full moons have different names? There's the Pink Moon in April, the Honey Moon in June, Harvest Moon in September, Hunter Moon in October,  and the randomly occuring Blue Moon (when two full moons occur in one month - very seldom, hence the saying!) I have a soft spot for the golden harvest moon, but now here in the Frosty Moon I think I've found its silver companion, all sparkly and white and frosted as a diamond.

While travelling by bus last week on a long journey, it was there; the whole way, a luminous companion as bright as any north star lighting up the dark outside (and inside). Not yet full, like some prelude waiting in the blue wings of sky. It stayed there the entire journey, at times to my left, to my right, and then right above me in the skylight, sometimes visible, sometimes not, but always there, throwing its light. Just as inspiration does. 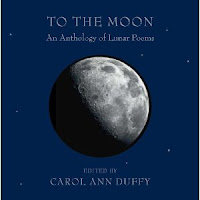 I said I'd write about the moon in more detail before, so here I am. This November full moon has inspired me to.  And I'm thinking of a collection of poetry dedicated solely to the moon ' - 'To the Moon', edited and introduced by Carol Ann Duffy. A book that finally shows how much writers have been inspired by this white deity from as far back as Shelley to Carol Ann Duffy herself. There are poems here ranging fom many different poets and styles, but one thing they all have in common is their devoted and undying awe and inspiration of the moon. So if you're a lunar lover, you must check out this book!

And of course not to forget that it's a full moon, and all the connotations that go with that. Feeling emotionally overwhelmed or that certain emotions are magnified right now? You've got the moon to thank for that. I always seem to see things clearer when there's a full moon. Like its luminance offers perspective. And tomorrow being 11/11/11, it all seems very fortuitous indeed...

Now it's getting dark. But not dark; the sky  is a curious mix of green and blue, a turquoise on the horizon, Aurora-hued with  pink and lilac lavender tones beneath. There's my picture.

So I'll leave you with some moon poems I particularly like in honour of this full moon.  If you have some more suggestions please let me know!

o the moon loves to wander
I will go clockwise and stare
when she is huge when she is half elsewhere
half naked, in struggle with the air

o criminal and ingrown
skinned animal o moon
carrying inside yourself your own
death's head, your dark one

why do you chop yourself away
piece by piece, to that final trace
of an outline of ice
on a cupful of space?

'The Woman in the Moon' ~ Carol Ann Duffy

Darlings, I write to you from the moon
where I hide behind famous light.
How could you think it ever a man up here?
A cow jumped over. The dish ran away with

the spoon. What reached me were your joys, griefs,
here’s-the-craic, losses, longings, your lives
brief, mine long, a talented loneliness. I must have
a thousand names for the earth, my blue vocation.

Round I go, the moon a diet of light, sliver of pear,
wedge of lemon, slice of melon, half an orange,
silver onion; your human sound falling through space,
childbirth's song, the lover’s song, the song of death.

Devoted as words to things, I gaze, gawp, glare; deserts
where forests were, sick seas. When night comes,
I see you gaping back as though you can hear my Darlings,
what have you done, what have you done to the world?

Shine on, O moon of summer.
Shine to the leaves of grass, catalpa and oak,
All silver under your rain to-night.

An Italian boy is sending songs to you to-night from an accordion.
A Polish boy is out with his best girl; they marry next month; to-night they are throwing you kisses.

An old man next door is dreaming over a sheen that sits in a cherry tree in his back yard.

The clocks say I must go—I stay here sitting on the back porch drinking white thoughts you rain down.