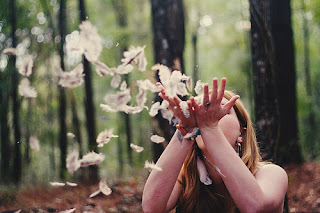 'They say that most of what happens to a writer happens only in their head.'

There's one occupational hazard about writing that affects me majorly in real life and that's imagination.

Specifically, over-use of imagination, over-reliance on imagination. Which translates to unintentional illusions and alternative realities made of the fine fragility of feathers that collaspe under the weight of reality's bricks eventually, leaving me in a heap of broken-dream rubble.

See to create fiction requires a lot of imagining. Lots of wondering and pondering, fantasising and make-believing, using and over-using of this power. To live in the real world requires....a blocking out of that power? My real world, and probably that of many other creatives, is more than scaffolded with imagination. I imagine things better than they are at times. I add and embellish and decorate the bones of day-to-day life with ideas, visions,  reinvention of what-ifs and what could bes. I refuse the black and white platter we're offered and choose instead to paint scenes with the coloured palette of possibilities. I see things as I'd like to see them; I see things as they settle into mutable shapes in my mind, not as the sharp lines they actually are in reality.

I first became aware of this at a creative writing group once when a participant remarked to me after I'd read out some work 'how she'd love to live where I lived, with all the magical surroundings and people' - she was referring to all the moonlight vistas, emerald-green wonder and blue-eyed muses I'd charted in my writing. It occured to me then that this must be how I see the world; not how others see it, not how it actually is. I was telling stories to myself I realised. That's how I lived, through stories. Through stories I'd read, watched, and created myself. The fabric of my life was a narrative I was continually creating and re-creating.

So I've come to realise that I have the power to create my reality somewhat. Mythologize things  into magic. Like an alchemist, turn the cold metal of mundanity to shimmering warm gold, ordinary to extraordinary. It's like I'm pre-programmed; if I didn't do this, then the world would seem a very plain place to me. That's why I believe stories are so important to us. They have been since the beginning of time, since narrative first began with a few scratches on cave walls.

We need stories. They are our way of making sense and meaning of this sometimes blank of existence. No one likes to be faced with a blank page after all, our instinct is to fill it. So we tell stories - to each other, to ourselves, to understand our world, but more so, to know that we matter, that things we hold dear matter, that everything has meaning beyond this sometimes bottomless insignificance that confronts us from time-to-time in the form of ennui and emptiness.
One of my favourite books is Life of Pi by Yann Martel. In it the author chronicles a young boy's experience lost at sea, alone on a lifeboat, with only a tiger for company. (Yes, a tiger. Read it to believe...) Without giving the story away, the book highlights the importance of fiction in our lives, the vital necessity of it for our sanity, our survival, our sense of self.

So being able to tell stories is good, right?  In certain situations yes. In others,...  I don't know. I've gotten myself into tricky situations due to an over-active imaginative impulse... When it comes to matters of the heart for instance, how to know what's real and what's imaginary? How in the heck do you decipher reality when you spend all of your time creating an alternative one while in writer-mode??! You see my dilemma. Most people have 'common sense', a gut reaction, which is their foolproof guide. I do too, but it's just that imagination interferes, and I don't know which to trust, as it's usually imagination  most of my waking life. 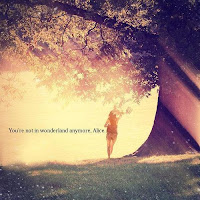 And now I'm wondering if I'm destined to make the same mistakes over and over again when it comes to figuring out what's real and what's imaginary in that airy-fairy vague realm of love. Is the proof in the actions, the words, or how I interpret them? Is the truth in my head the pure unaltered version or has imagination enveloped it in a misty aura, tinting  it opaque? I can't decipher reality from imagination at times; and without that gift I wouldn't be able to sit down and write and create worlds out of my head and see life as great big coloured Wonderland full of possibilities and surprises.  But with it, my vision is obscured when it comes to calling it as it is. (Added to this I'm also a diehard Romantic; which results in a highly potent mix of misguided idealism, unyielding optimism and mighty misunderstanding!)

Like right now. Right now I feel stupid for having read signs wrong; putting two and two together and getting five; believing in a rainbow instead of a black and white reality. A Sylvia Plath poem is going round and round in my head which explains my state exactly, because yeah, it is enough to drive you mad! And the repetive haunting echo of the villainelle structure just goes straight for that silly soft part that actually was stupid enough to drop all defences and believe. Here:

I shut my eyes and all the world drops dead;

I lift my lids and all is born again.
(I think I made you up inside my head.)

The stars go waltzing out in blue and red,
And arbitrary blackness gallops in:
I shut my eyes and all the world drops dead.

I dreamed that you bewitched me into bed
And sung me moon-struck, kissed me quite insane.
(I think I made you up inside my head.)

God topples from the sky, hell's fires fade:
Exit seraphim and Satan's men:
I shut my eyes and all the world drops dead.

I fancied you'd return the way you said,
But I grow old and I forget your name.
(I think I made you up inside my head.)

I should have loved a thunderbird instead;
At least when spring comes they roar back again.
I shut my eyes and all the world drops dead.
(I think I made you up inside my head.)


George Bernard Shaw once said: 'Only in books has mankind known perfect truth, love and beauty.' And I'm starting to really believe that. That only in the hold of the imagination does perfection exist, in love, truth and beauty, the great grail trinity. Seems reality comes up second-best every time.

So I turn to the page, where it's perfectly acceptable to imagine, and be rewarded with the contentment of creation. The permanence and importance of it. Instead of self-doubt and recrimination.

The sobering thought of facing reality is a thorny one. But facing reality without the cushion of imagination, definitely worse.  In the coming barren days, it'll be imagination that tends to these raw wounds reality has inflicted. I need this trait to create. Without it, I wouldn't have  a hope in hell of ever filling a page.

There you have it, another writer's dilemma. Has anyone experienced this occupational hazard? How do you deal with it? Is there a chance of reconciling the two? I'd love to know....!


But for now I suppose, if it came down to it, I'd rather be buried by feathers than a tonne of bricks.

(And another poem, the medium where reality is tilted until truth glints off it. And apologies to Sylvia Plath for showing her gloomy side once again here, there is more to her than deadpan despair, will include more of her neutral poems in future..) But for now, here's an achingly accurate picture of regret: