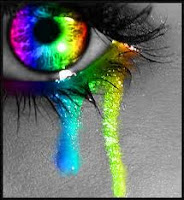 'Melancholy is the pleasure of being sad.' - Victor Hugo

So I've come up with this idea for some new regular blog posts on some favourite words of mine (because I love what words can do).

And the first word I'd like to muse on is: Melancholy.

It's a word that often comes up in relation to poetry, poets, and the arts in general. And it's a word I love as much for its sound and its sight, as its meaning.

Melancholy -  like a green vine coiling around the heart. Or a perfumed sadness. A beautiful kind of sorrow, like an intricate lace veil worn over the face while grieving, a deep forest-green pool of tears and an emerald halo of sighs. So many images that come to mind when I see the word... A black inkscape of tears, tears, so many tears, oval-shaped and drooping like sad but beautiful pearls. 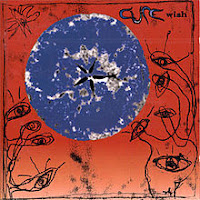 A dam of tears always on the verge of bursting. An eye, like an antenna, always open, and always feeling. (like The Cure's 'Wish' album artwork, left) And it sounds like tears too doesn't it? A collected deep reservoir of tears. And almost like the dripping of a tap that will never shut off - a faucet of tears left to over-run in the heart. Like the rippling of water in a pool after a stone is thrown in; a drowned wish.

When studying literature, melancholy is guaranteed to be one of the most common words you will come across in the experience of your reading. But what is melancholy exactly? And why and how did it originate?

It's defined in the dictionary as being a 'deep, pensive, and long-lasting sadness.' The word 'melancholy' first arose from the medieval categorisation of the four medical 'humors' - diseases or ailments caused by an imbalance in the basic bodily fluids: melancholia, phlegmatic, sanguine and choleric. Melancholia was caused by an excess of black bile, a medical condition which had symptoms of moodiness, despair and sadness - hence the later terming of melancholy as a 'black' mood.

Shakespeare's Romeo & Juliet was the first place I encountered the word melancholy. Upon first seeing Romeo appear in the play, we learn from his cousin Benvolio that he is depressed, sad and moody, 'melancholy' as all the notes remark.  His father descibes his affliction in detail:
'Many a morning hath he there been seen,
with tears augmenting the fresh morning's dew,
adding to clouds, more clouds with his deep sighs...
Away from light steals home my heavy son,
and private in his chamber pens himself,
shuts up his windows, locks fair daylight out,
and makes himself an artifical night:
Black and portentous must this humour prove,
unless good counsel may the cause remove.'

'With tears augmenting the fresh morning's dew....' maybe that's where I got the tears imagery. Romeo is described in all the secondary reading as being 'melancholy' - sad for the sake of being sad, a sort of wallowing and feeling sorry for one's self, moody, in a word (which is brilliantly amplified by Radiohead's moody soundtrack in the Baz Luhrmann film version - listen here). Turns out, Romeo is lovesick and admits 'I have lost myself, I am not here, this is not Romeo, he's some other where.' A lovesick melancholy then. A sort of self-indulgent moping. A weight of weary woe. 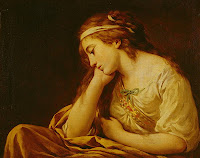 The cult of melancholy was quite prevalent in Elizabethan society - stemming from a preoccupation with death and a lack of things to do for the educated classes. Shakespeare's Hamlet was a personification of this particular affliction, known as 'the melancholy Prince' or the 'malcontent', who spent his days philosophising and ruminating on death and existentialism, while battling with the horrors of revenge wrecked upon a sensitive mind.

'There’s something in his soul,/O’er which his melancholy sits on brood;' - Claudius comments of him, while Hamlet himself spends most of the play moping around, contemplating the act of revenge upon his father's killer Claudius and indulging frequently in soliloquies which reveal the mechanisms of a mind prone to despair: 'I have of late, but wherefore I know not, lost all my mirth, forgone all custom of exercise; and indeed, it goes so heavily with my disposition that this goodly frame, the earth, seems to me a sterile promontory; this most excellent canopy, the air, look you, this brave o'erhanging firmament, this majestical roof fretted with golden fire: why, it appears no other thing to me than a foul and pestilent congregation of vapours.'

Eighteenth and nineteenth century England saw the further rise of melancholy. Poet John Keats' famous 'Ode to Melancholy' encapsulates this feeling, 'the wakeful anguish of the soul' perfectly. And like him, the Romantic poets fostered the cult of melancholy as an extension of the sublime and beauty. Because to suffer was to have a poetic sensibility, and in melancholy, beauty resided. French Modernist poet Charles Baudelaire noted 'I can barely conceive of a type of Beauty in which there is no melancholy'. Beauty was both the cause and cure of melancholy, as Keats demonstrates in this poem:

Ode on Melancholy - John Keats
1.
No, no! go not to Lethe, neither twist
Wolf's-bane, tight-rooted, for its poisonous wine;
Nor suffer thy pale forehead to be kissed
By nightshade, ruby grape of Proserpine;
Make not your rosary of yew-berries,
Nor let the beetle nor the death-moth be
Your mournful Psyche, nor the downy owl
A partner in your sorrow's mysteries;
For shade to shade will come too drowsily,
And drown the wakeful anguish of the soul.

2.
But when the melancholy fit shall fall
Sudden from heaven like a weeping cloud,
That fosters the droop-headed flowers all,
And hides the green hill in an April shroud;
Then glut thy sorrow on a morning rose,
Or on the rainbow of the salt sand-wave,
Or on the wealth of globed peonies;
Or if thy mistress some rich anger shows,
Emprison her soft hand, and let her rave,
And feed deep, deep upon her peerless eyes.

3.
She dwells with Beauty - Beauty that must die;
And Joy, whose hand is ever at his lips
Bidding adieu; and aching Pleasure nigh,
Turning to poison while the bee-mouth sips;
Ay, in the very temple of delight
Veiled Melancholy has her sovran shrine,
Though seen of none save him whose strenuous
tongue
Can burst Joy's grape against his palate fine;
His soul shall taste the sadness of her might,
And be among her cloudy trophies hung.

But in art, melancholy is something else: both an affliction and a gift. An expected consequence of being sensitive and creative.  Aristotle said that 'great men are always of a nature originally melancholy.' 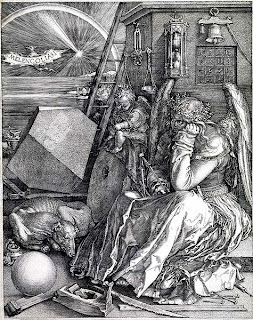 Artist Albert Durer represented melancholy as a state in which the artist waits for inspiration to strike; that time of despondency in between creative periods (Melancholia I, 1514, left). I can definitely relate to this as it's exactly how I have been feeling these past few days: forlorn and grey and withering away in the wake of impending inspiration as the world crashes into insignificance around me...

Melancholy became increasingly associated with artists and writers as the centuries wore on, a sort of occupational hazard almost. Claire Tomalin, Dickens biographer, has said that 'writing induces melancholy. You're alone, a hermit'-  which is quite true I suppose. And loneliness is a pre-requisite for melancholy.

But also, melancholy seems an essential ingredient in creating great art too. How can you create great art without having known sadness? After all, it's the tragedies, the sad stories that get us the most, that stick in the gut and sputter in the heart. Singer-songwriter of The Beatles fame Paul McCartney said that with writers, 'there's nothing wrong with melancholy. It's an important colour in the writing.' This corresponds to what American singer-songwriter Shawn Colvin says about writing songs, 'I think that the indefinable space between happy and sad is the most moving and compelling place for an artist to be. If there's anything I consistently strive for, it's a melancholy limbo.'

A melancholy limbo - a place between happy and sad. A moving and compelling place. Is that what melancholy can be defined as? From what I know of it, it is a limbo sort of place; a place you hang around in, full of shadows; a place where things are felt ever more keenly than normal and where everything seems bittersweet; and a place where your love of beauty is a symbolic pomegranate, condemning you to the dark underworld for a while. But all the better to see the light when you emerge again. 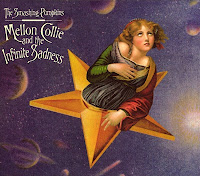 Melancholy is not a word that you would hear in modern language. It's old-fashioned and sort of quaint sounding, but does it still exist? Yes. It's known now as the lighter side of depression, the medieval forerunner to it perhaps, but mostly, it's still a word associated with the arts and the artistic disposition.

When I think of melancholy in a modern context I always think of 'Mellon Collie and the Infinite Sadness,' the aptly named album of nineties rock group The Smashing Pumpkins. Here is music that embodies the whole concept of the feeling, from the mournful artwork to the languorous tunes. It was an album 'based on the human condition of mortal sadness' according to the band's frontman Billy Corgan and features songs with lamentative titles like: 'Ode to No One, ' 'Tales of a Scorched Earth', 'By Starlight', ' 'Where Boys Fear to Tread, 'My Blue Heaven,' 'Porcelina of the Vast Oceans,' that echo the titles of those earlier Romantic poems which are just as doleful. (listen here)

Melancholy today manifests itself most in music, in sad songs most especially (and it sounds especially like this song: Lie in the Sound a lounging in moroseness, a sorrowful plunge, a drowning, a languor of lovesickness and lethargy, an innate ache, a free-falling into the empty echoing abyss of sadness.) And like in the Keats' poem, we do 'glut' ourselves on melancholy - it is a feeling mechanism if you like, a way and a means of actually feeling. We can shed tears from listening to the saddest songs. There's a grandeur about them that catches us around the throat. Maybe it's the catharsis - the release of pent-up emotions through art, that powerful process of emotional cleansing - that resonates with us so deeply.

Melancholy. Melancholy. Sad and sighs and sorrow and beauty and art and an aesthetic sensitivity. Victor Hugo may have been right - there is a pleasure in being sad - and that is what melancholy is. Not a dark despair, but a bittersweet appreciation of the sad things in life. As they are what can most make us feel.


And if melancholy is associated with art - a side-effect of it and an ingredient -  then art is also a cure for it. As writer and poet Margaret Atwood has said in no uncertain terms -  'the loony bins are full of those who haven't written a poem.' Maybe melancholy is our saving grace after all, not just a wistful characteristic. Something that involves both an appreciation of beauty as well as a wounding by it - in other words - an appropriate reaction to the world we find ourselves in. 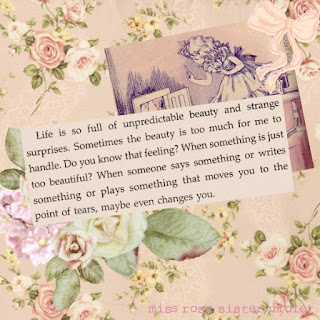