'We are all of us in the gutter, but some of us are looking at the stars.' - Oscar Wilde

'The only things you ever really have are the ones you hold inside your heart.'

As Valentine's day approaches, I'm beginning to wonder what exactly it means to be a romantic  - or Romantic, should I say.

I'm a romantic by nature, by default. Always have been, always will be. And I'm not just talking about romance. I'm talking about being a Romantic, a believer in beauty, dreams and ideals as well as just love. A believer in being devoted to that what moves us, discovering the extraordinary in the ordinary, seeking the best possible versions of ourselves and our world and of following the heart first and foremost in all endeavours of life. It's an entire way of life, a way of thinking and acting, feeling and appreciating, not some misused lovelorn label.

The dictionary defines a 'Romantic' as being one who is 'marked by the imaginative or emotional appeal of what is heroic, adventurous, remote, mysterious or idealized.'  Also as 'imbued with or dominated by idealism, characterized by a preoccupation with love, a quality or spirit in thought, expression or action, and above all, an emphasis on the imagination and emotions.' It's all about the imagination and emotions, their power, their importance in creating and marking our lives. 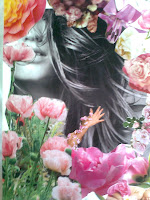 How typical and trivial of the realists to belittle us as 'hopeless romantics,' soft-hearted saccharine suckers who live for candlelit dinners and flowers! Rather, being a 'Romantic' is about having a view of and whole-hearted approach to life that is not cynical, not hardened, not resigned to reality. It's about being committed to the highest pursuits of the heart: beauty, truth and goodness, in all aspects of life, not just love. As Romantic poet Keats remarked: 'beauty is truth, truth beauty; that is all ye know on earth and all ye need to know.'

But in today's world, Romantics are dismissed as naive, babbling, sentimental fools.  A world where materialism, cynicism and oh-so-boring practicality reigns, where it's deemed 'foolish' to pursue the heart's prerogatives over the head's. I've had a lot of unpleasant run-ins with realists in which I try to defend my passionate principles against their steam-roller sense of reason. It really gets me down how they dismiss anything other than what 'makes sense', what logically adds up. What does their life add up to then? Numbers and rules and routines and dreams quarantined to the realm of ridiculous, locked and shut away. Where's the fun in that!

Life is for dreaming and imagining and creating and ultimately living; for experiencing not tut-tutting. We only get to live once, why shouldn't we get carried away with it all? we Romantics sing, swirling notions like ribbons around our world, decorating days with dreams and ordinary with a tapestry of wonder and meaning. The realist's creed goes something along the lines of: savings - check, routine - check, work, work, work - check, mortgage - check, marriage (or attainment of suitable partner for society's sake) - check, duties completed - check, checklists - check, staying within the box - check. It's all have tos and shoulds, nos and nots; not curious maybes and wishes and whimsy, no dreaming, indulging, affirming, no passionate displays of anything,  no smelling the roses, no even noticing the roses, well, because face it - what's the point of that? (Readers, here's where I throw my arms up in protest - ahhhhh!)

Instead of looking at the stars, their eyes are on the ground and they expect everyone, including Romantic souls to be the same, to give in to this drab version living. To give up our swooning souls for a luke-warm lacklustre existence. Well, never! 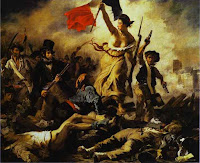 We won't give up.  Romantics are tough, not stereotyped softies. Just look  at the Romantic movement in literature, music and art in the late C18th century. Romanticism, as it was known,  was characterized by a heightened interest in nature,  an emphasis on the individual's expression of emotion and imagination. It was a marked departure from the strict and confining attitudes and forms of classicism, and most of all, it represented rebellion against established social rules and conventions.   This can be seen most vehemently in French Romantic painter Delacroix's famous painting Liberty Leading the People. This painting was more to do with the spirit of rebellion and freedom of ideals than head-in-the-clouds daydreaming.  Vive la liberté is definitely a slogan of a Romantic if you ask me! (As is an affinity with the arts, needless to say.)

The Romantics held the imagination in the highest regard, and with it, emotions and the Self as a whole. It was the first time in literature that the individual began to take central focus and the imagination was revered. The literary Romantic movement began with the great Wordsworth, Coleridge, visionary metaphysical poet Blake and then bad-boy rebel Byron. Their poetry focused on nature and the great powerful spectrum of the imagination. Wordsworth encouraged us to 'fill our paper with the breathing of our hearts' and learn from nature, not the materialistic world which 'laid waste to our powers.' A new climate in the arts was engendered by Romanticism, one which led to avant-garde and bohemia and art for art's sake and being different and revelling in that difference and freedom of expression and living for the moment and smelling the roses, phew!

But in this world, Romantics are backbitten at every corner by the snarling hordes of cynics and realists. (Like in the picture here, a classic by Richard Stine) Why do these people feel that they're always right and their opinions the right ones, the only ones? Who bare their teeth 'all the better to eat you with my dear' at every turn, huffing and puffing and trying to blow our big beautiful house down with all their cribbing and sniping. I've been looked over caustically by cynical peering eyes, my dreams dashed by their dismissiveness and irate sense of reality - but, oh no, in the real world, that would never happen! But I know better. Because I believe in better.

See, what exactly constitutes the real world? Is the real world not as how each individual sees it, 'if you can, you can and if you can't, you can't'? One of my favourite quotes is from Ayn Rand's novel 'Atlas Shrugged' which talks about this illusion of the real world: 'The world you desire can be won, it exists, it is real, it is possible, it is yours.' The real world is what we see as real. Einsten once said that reality is an illusion, and Picasso that 'everything you can imagine is real,' so it figures that we create our own realities. Life is a blank slate and it's up to us to fill it. If it's black-and-white or grey, linear and logical, so be it. But if it's multi-coloured and shining and flowery and starry, then even better. How dare others criticise it? It is as much as real to us as theirs is to them. But more than that, it's better. Maybe they're just jealous.

Romantics don't give in to these cynical predispositions though. We keep smiling, keep smelling the roses. It's not that we're ignorant of the rain and the practical must-dos and all the bad stuff that goes on, but rather, we choose to rise above it, to assign more importance and energy to the good things in life, to the wide open world of dreams and imagination and all the possibilities it offers, over the boundaries and restrictions of reality's iron fist, to what really makes life worthwhile. We live by possibilities, not restrictions; hope, not doubt; faith not fear. We don't settle for indifference, because we know there's real treasure out there to be found. We push the boundaries; we know rules and routines are not the be all and end all, that there is something beyond. We choose to believe in this great big beautiful beyond and navigate towards it, pinning our hearts to our sleeves and setting sail on a wish and dream, a wink and a smile ;)

Granted, maybe it's a bad thing to be a romantic,  a starry-eyed sentimental focused solely on love and its ideal. But to be a Romantic -  is quite an accomplishment. How lucky to be endowed with a love and appreciation of all the wonderful things the world has to offer (love included) and  having the dedication to honour and pursue them and the freedom of mind and heart to unabashedly express and embrace them.

I'm proud to be a Romantic. And I'll defend my grounds - whimsical or no - passionately, courageously, infinitely.


with my heart still furiously beating,

And did you get what
you wanted from this life, even so?
I did.
And what did you want?
To call myself beloved, to feel myself
beloved on the earth.

Although you sit in a room that is gray,
Except for the silver
Of the straw-paper,
And pick
At your pale white gown;
Or lift one of the green beads
Of your necklace,
To let it fall;
Or gaze at your green fan
Printed with the red branches of a red willow;
Or, with one finger,
Move the leaf in the bowl--
The leaf that has fallen from the branches of the forsythia
Beside you...
What is all this?
I know how furiously your heart is beating.