Cloudy, With a Chance of Poetry

"Clouds are all sorts. They are a medium of revelation, through which the gods show themselves. They're a playground for human imagination, where we can see any number of forms and creatures ("Very like a whale!"). They are mood music, the emotional backdrop to a scene. They are complex natural phenomena, which challenge our capacity for accurate observation..." - On Constable's Study of Clouds, The Independent

I love clouds. They're gaze inspiring. Cumulus, nimbus, cirrus, all of them are fascinating to my sky-trailing eyes. Many's a day can be spent wiled away watching them. Many's a thought has taken on new dimensions in their presence. Many's an imagination that has been carried away into seeing animals and shapes in them.

Yep, clouds are cool. So magnificent and so ordinary, taken for granted, yet marvelled at when we really ponder them.

On that note then, here are a few poems I was delighted to come across that marvel and wonder and woo, with their witty sentiments on clouds. Especially Billy Collins' offerings, imaginer extraordinaire. 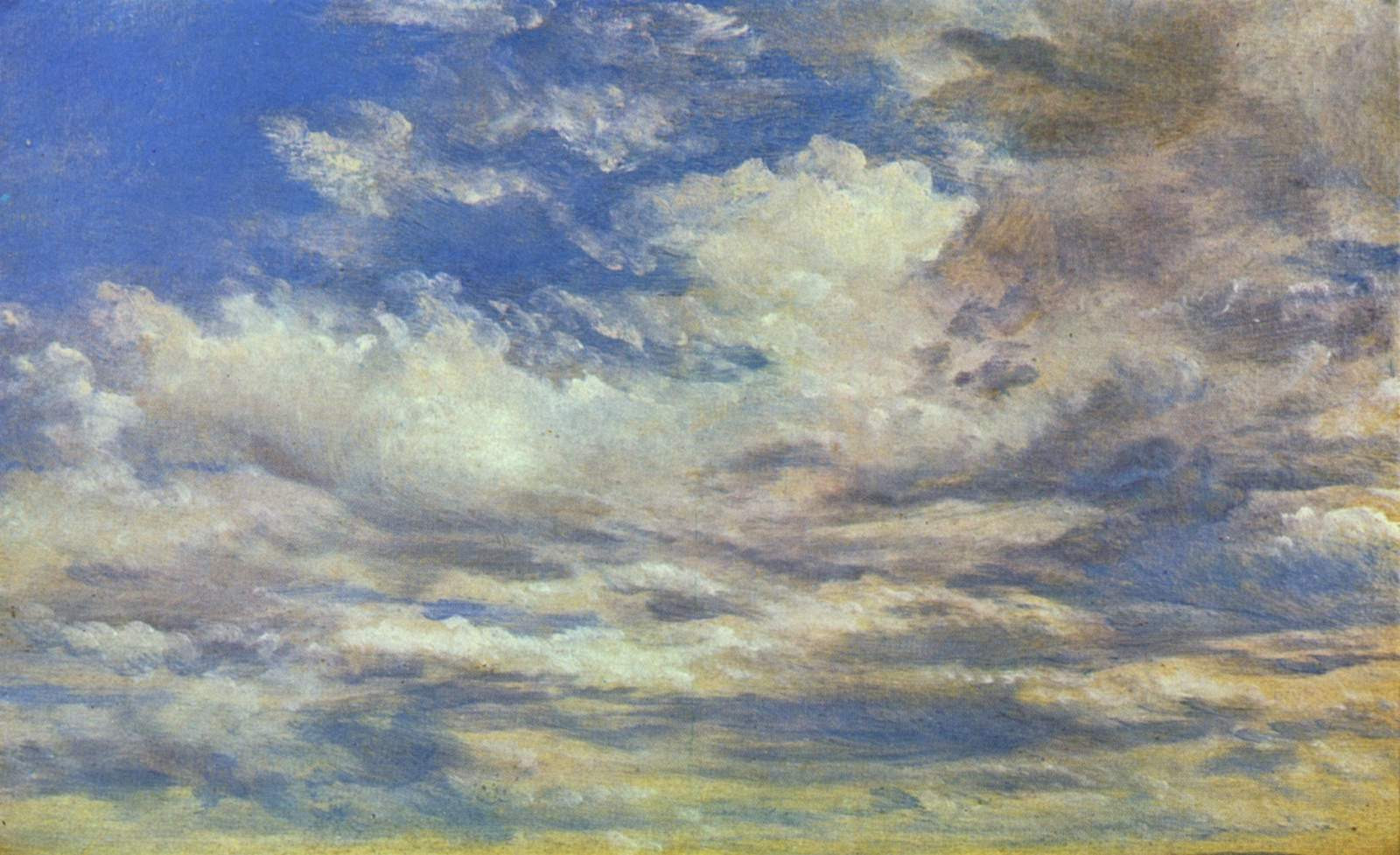 The emotion is to be found in clouds,
not in the green solids of the sloping hills
or even in the gray signatures of rivers,
according to Constable,who was a student of clouds
and filled shelves of notebooks with their motion,
their lofty gesturing and sudden implication of weather.

Outdoor, he must have looked up thousands of times,
his pencil trying to keep pace with their high voyaging
and the silent commotion of the eddying and flow.
Clouds would move beyond the outlines he would draw
as they moved within themselves, tumbling into their centers
and swirling off at the burning edges in vapors
to dissipate into the universal blue of the sky.

In photographs we can stop all this movement now
long enough to tag them with their Latin names.
Cirrus, nimbus, stratocumulus -
dizzying, romantic, authoritarian -
they bear their titles over the schoolhouses below
where their shapes and meanings are memorized.

High on the soft blue canvases of Constable
they are stuck in pigment but his clouds appear
to be moving still in the wind of his brush,
inching out of England and the nineteenth century
and sailing over these meadows where I am walking,
bareheaded beneath the cupola of motion,
my thoughts arranged like paint on a high blue ceiling.

*(See Constable's study of clouds here and pict above) 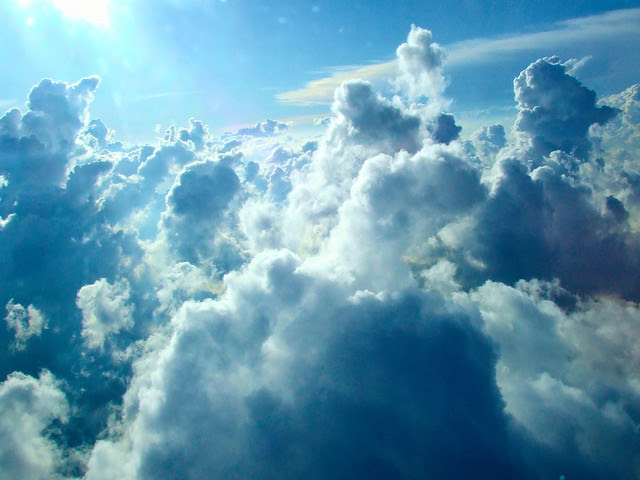 I’d have to be really quick
to describe clouds -
a split second’s enough
for them to start being something else.

Unburdened by memory of any kind,
they float easily over the facts.

What on earth could they bear witness to?
They scatter whenever something happens.

Next to clouds
even a stone seems like a brother,
someone you can trust,
while they’re just distant, flighty cousins.

Let people exist if they want,
and then die, one after another:
clouds simply don't care
what they're up to
down there.

And so their haughty fleet
cruises smoothly over your whole life
and mine, still incomplete.

They aren't obliged to vanish when we're gone.
They don't have to be seen while sailing on.

The Biography of a Cloud - Billy Collins

It would have been easier to folllow Johnson
from pub to pub with a notebook and pen
or sift through cardboard boxes
crammed with Trollopiana
than to tell the story of this anonymous mass.

It is hard to say even where it was born
though considering its thick, whipped texture
and its lofty, processional manner,
I have it somewhere over a large warm body of
water,
fathered by heat, mothered by humidity.

We do know this much:
that it billowed white at the mountainous top
and its flat underside was the grey of headstones;
that it slid onto the land and felt its way
over the contours of several western states,
always moving eastward, from left to right
the way eyes move over print
as if it were reading the earth with its blind shadow.

Otherwise, it did nothing
but allow itself to be blown through the high cold
atmosphere,
though it was always changing shapes
and assumed in its lifetime the form
of Australia, the head of an enormous dog,
a sheep on the run, a hippo with its mouth agape,
and even the camel that passed through the eye of Hamlet.

As usual, its existence was noted by only a few:
a workman eating lunch on a girder,
a woman on a terrace watering plants,
and a large number of people named Riley,
all supine in hammocks or on blankets spread for picnics.

Ordinarily it travelled in a convoy
or pedalled along with one or two companions,
but early one morning over Arizona
it held the distinction of being the only one in the sky.

In the end, it died as all clouds do,
in an obscurity befitting one of the minor English poets,
the son of a London hatter or an Essex clergyman,
sent down from Oxford for heresy or gambling,
soon addicted to laudanum, then the slide into destitution
for their stories, too, begin to sound alike.

But I would rather track the life of a cloud
than labour over packets of letters
written in a crabbed hand
or explicate the four sorry volumes of verse
he would have left when he died,
gout-ridden on a cot in Wembley.

I prefer a wayside bench, ensnared by vines,
to the dark aisles of a library,
a place to watch them inch across the sky,
caravans plying their ancient trade routes.
I want to train my scholar's eye
on the bright shifting edges
where the weightless tonnes of clouds lick the air.
I want to remove my hat, close my eyes,
and feel the sun, warm and intermittent, on my face.

Posted by Siobhán at 19:01 2 comments: Links to this post

The Fear: Writing and Self-Doubt

I haven't posted here in a while. I suppose that's because I haven't written in a while. And why is that? The dreaded block back? No, not at all. Actually, I'm full of ideas. They're rattling round my head on a permanent spin cycle, waiting to be verbalised. It's more the fear.

You know the fear I speak of. The one that plagues all creatives.

Fear that you're not good enough. Fear that your talents have left you. Fear that you can't do it anymore. So why bother at all? Doubt, to be more precise. Self-doubt. Sylvia Plath was right when she said that 'the worst enemy to creativity is self-doubt.' It is. It is crippling, debilitating.

It's different from block. Block is more the outward manifestation of a deeper root cause, a malignant source of all stop-and-stutter verbal hesitation.

All writers experience the fear, the doubt. Even though some might come across as utterly confident - even to the point of arrogant. You wouldn't ever suspect that they too were hounded and haunted by self-doubt, but they are.

The closest career to writers I can think of are trapeze artists (yes, trapeze artists). Of course, you need confidence to pull off those moves, to swing in sky so triumphantly. One ounce of doubt would bring you down. (Like Peter Pan and flying).  And when it happens, when you fall, your bones may hold up, but your faith breaks a little. And it's hard to swallow it down and get back up again. Also as a trapeze artist, you must depend upon your partner to catch you, as in writing, a writer depends upon their inspiration, that second gravity-defying dimension that is not always tangible.
I don't know why we doubt but I suspect it is because we work in the realm of creative swells and trickles. Good writing, great writing is never a constant process. For every good sentence produced, there were probably about ten flaky ones that scaffolded it. All our words are not gold. Some are flint. Some are copper. Some are lead. We have to work at it to get it good. We have to work with a heavy hand to make it seem feather-light. Some days, words will flow easily, graciously. We will feel like we are gliding on the crest of a wave. Everything is glittering.  It is so easy to surf this wave of writing. But then other days, it's hard. We can't catch a wave. The ocean is flat and will not rise to our bidding. We splash around a while before calling it a day. It's all highs and lows, ebbs and flows, waheying and worrying. And it's in between these extremes that doubt sneaks in. We begin to doubt our own abilities on the flat days and wonder how we will ever get so high again, and with that, we're soon in the dark territory of fear. We begin to fear the process, fear the taunting of the blank page, the many words that will bleed and die there. We begin to fear that our dream was a delusion all along.  So that's where I've been this past while. And instead of hiding from it any longer I thought, hell, I'll write about it, I'll take the first steps out of the shadows. I know doubt is a part of the creative process, but I didn't know it could be so overpowering at times. What is it that Pi says in Life of Pi when his faith is faltering? -
“I must say a word about fear. It is life's only true opponent. Only fear can defeat life. It is a clever, treacherous adversary, how well I know. It has no decency, respects no law or convention, shows no mercy. It goes for your weakest spot, which it finds with unnerving ease. It begins in your mind, always ... so you must fight hard to express it. You must fight hard to shine the light of words upon it. Because if you don't, if your fear becomes a wordless darkness that you avoid, perhaps even manage to forget, you open yourself to further ttacks of fear because you never truly fought the opponent who defeated you.”

So here I am shining the light of words upon it. And maybe it's opening up the darkness just a bit.And a last word on it from Pi, Yann Martel's fictional embodiment of all our human emotions -   “If Christ spent an anguished night in prayer, if He burst out from the Cross, 'My God, my God, why have you forsaken me?' then surely we are also permitted doubt. But we must move on. To choose doubt as a philosophy of life is akin to choosing immobility as a means of transportation.”Yep. That's it. Doubt will get you nowhere. We must get over it and move on. Move on. Write on. Besides, it is just a mark of a true artist: ~ Siobhán

Posted by Siobhán at 22:12 8 comments: Links to this post